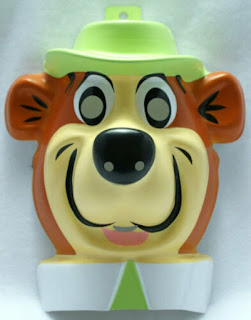 Back in the early '60s (around '63) my mother bought me a Yogi Bear Hallowe'en mask from Woolworth's.  It was made of paper mache, but it was shaped, not flat, and had the 3D contours of Yogi's front facial features, with his collar and the knot in his tie just like in the cartoon.  I remember the smell of it, but had forgotten until recently when something reminded me. However, more about that shortly.  (Oh, the suspense.)

Sometime in 1964 I took it into school with me for some reason (not sure why after all these years) and placed it under my desk at the front of the class.  At some stage the pupils were circulating around the room (during a break perhaps) and I watched with alarm from a distance away as another pupil, under the pretence of trying to hoist himself up to sit on top of my desk and failing, squashed Yogi's fizzog with his foot as he came down again.  As I said, the mask was under my desk, so it could have been nothing less than a calculated, deliberate move on his part, the horrible little weasel.

He denied it when I confronted him and there wasn't a lot I could do but take poor Yogi home and try and manipulate his face back into shape.  For all the much-vaunted 'innocence of youth', there's a cruel, nasty, malicious streak that runs through the makeup of some children, and I believe I witnessed an example of it on that day.  I had something that the other boy didn't, and if he couldn't have it, he didn't want me to either.  Or perhaps it was just my obvious pride in the mask that set him off, and he just wanted to deflate me.  Sad, but there it is.

Anyway, another couple of houses and a school away, I got another Yogi mask from Woolies again, exactly the same as the previous one.  I no longer recall how long I had it, but I remember it fondly and would love to find another.  Due to the fragile nature of the mask though, I doubt that many (if any) of them survived.  However, two or three years back, I saw a plastic Yogi mask on ebay and bought it, though it was a more recent piece of merchandise than my original.  It was slightly contoured too, but without the collar of my original mask.  Still nice to have though.

The mask itself wasn't too expensive, but the postage from the States was (needlessly so in my opinion), but at least it was nice to have a Yogi mask again, even if I was never going to wear it anywhere.  Recently, I saw another modern Yogi mask (and when I say 'modern', I mean it could've been made anytime within the last 30 years or so), this time with his collar and tie knot, so I took the plunge and purchased it.  It's also plastic, but strangely, on the one time I held it over my face, it smelt like the paper mache one from my childhood (or at least enough like it to remind me of it).

The first and second pics are the seller's photos of my new mask, the third is my own photo of the one I got a wee while back.  You've probably already guessed that this post is just an excuse to ask if any of you might have an example of the '60s paper mache Yogi mask lying tucked away in a cupboard somewhere, and whether you'd like to sell it.  If so, let me know.  Even if nobody has one, do any of the older Crivvies out there (yes, I mean you, McS) remember the '60s mask at all, or was I the only kid in the world who had one (twice)? 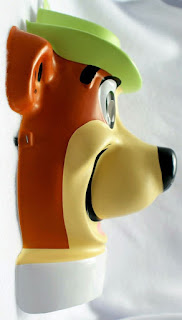 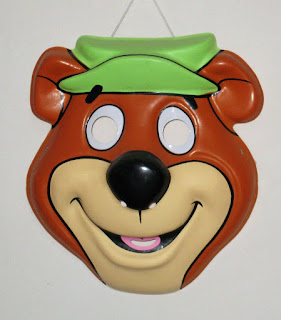 Isn’t the human mind strange? when I read your line “I remember the smell of it…” in relation to your Yogi mask, I was immediately transported back around 1969(ish) when my mum and dad bought me a Dracula mask for Halloween . I remember it had a strange smell, not unpleasant but it just smelt of what I assume was strong plastic. I don’t think I had thought of that mask in decades but I immediately saw it in my mind’s eye on reading your post. s I recall it was white plastic with the black V hairline that was in the style of Bela Lugosi’s portrayal of Dracula. Most of all I remembered the eyes, they were small round discs ( a bit larger than a 1p piece) that swirled to give the effect of Dracula’s eyes hypnotising you. You could see through them as there was a hole in the centre of each disc. I have no idea where we got that mask (possibly Woolworths) or anything else about it but it must have made an impression on me to remember it so clearly in flashback.

MY mind is certainly strange, McS, and there are probably those who would question whether it's human, but yes, the mind is indeed an odd and remarkable 'animal'. I'm glad that my post resuscitated memories of your own mask and returned you to the '60s and the bosom of your family, even if only for a moment. I don't recall ever seeing a mask like the one you describe, which in itself is odd as I was right 'into' things like that at the time, but I don't suppose you remember my Yogi mask either. And they both came from Woolies. eh? So did you go out as Drac at Hallowe'en?

I can remember back around that year on the back of Corn flakes boxes were cut out clown masks and after that Mayan and Aztec masks.I can recall having all the old dears on the street educated to eat Cornflakes.

And a bit later were the Star Trek masks, LH. Remember them?

I don't recall going out in that mask for Halloween Kid. Actually it might have been before 1968 now I think about it but I can't remember exactly. I do however remember the cornflakes masks though not Star Trek, in fact didn't they have a Yogi Bear mask at one time as seem to recall cartoon character masks although that may have been from a shop.

I think Kellogg's DID do a sort of 3D cardboard Yogi mask, McS, which required 'assembly'. Not sure whether it was cut from the box or it was an offer that had to be sent away for, but I'd like one of those as well. I've bought another couple of vintage Yogi items recently, which I'll show on the blog once they arrive.

No I don't remember the Star trek masks which is unusual as I was a big Trekkie back then.I should have pounced on them . Highly Illogical!

There's a post about them on the blog, LH. It's called 'Masks And Memories - To Boldly Go...'