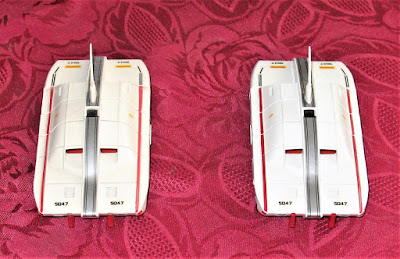 It must be around 26 years ago now, maybe more, when I acquired a beat-up Dinky MSV from someone.  I already had a more or less pristine one - with box - but I wanted to try my hand at restoring a slightly the worse-for-wear one.  So I completely stripped off the paint that remained, hand-painted it, applied replica Spectrum symbols and silver labels, then added some spare decals I had from an Angel Interceptor model kit.  The final act was to give it an aerial, but at that time no one (as far as I know) was producing replica ones that matched the shape of the originals, so I made do with a curved one.  The finished restoration job looked so good that I got another set of Angel decals and added them to my first MSV.  The two were now identical except for the aerials, whose difference meant I could distinguish between the two cars at a glance and was unlikely to confuse one with the other.  And so it was for, as I said earlier, at least 26-odd years.

However, several days back, while hanging a vehicle on a pin on the wall, it dropped onto the MSV underneath it and snapped the curved aerial.  All those years ago I'd purchased a bunch of aerials, but I only had grey/silver and black ones left, not white like the one that had adorned the toy for around a quarter of a century.  I used a grey/silver one as a temporary replacement and ordered a replica aerial which matched the original Dinky one (from ebay), as producers of such duplicate parts had come a long way over the years and were now able to supply 'bits-and-bobs' that were practically identical to the real thing.  Anyway, it arrived this morning, so I removed the temporary 'stand-in' and affixed the new permanent replacement.  When the two MSVs are placed side-by-side, from a few feet it's practically impossible to tell which one is which. 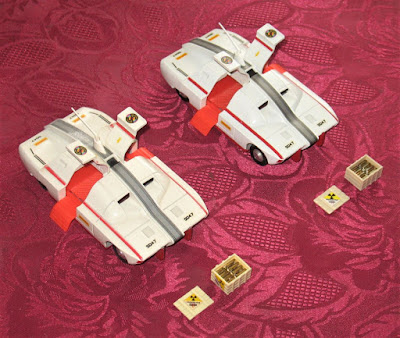 For years, the second MSV was without its crate containing radioactive isotopes, but I managed to obtain a replica a few years back, so its now complete and matches its doppelganger.  One day I'll scan my original box and make a duplicate so that both vehicles (not just one) have everything they originally came with, and I'll derive a real sense of satisfaction from having sorted one of the most pressing problems of our time - as far as Dinky MSVs go anyway (just trying to inject a sense of drama into the story).  Thing is, although I'd always have preferred a matching aerial all those years back (and I'm glad to have finally obtained one), 26 years is a long time and I'd grown used to the curved aerial over that period and now kind of miss it.  See me, never bloody happy, am I?! 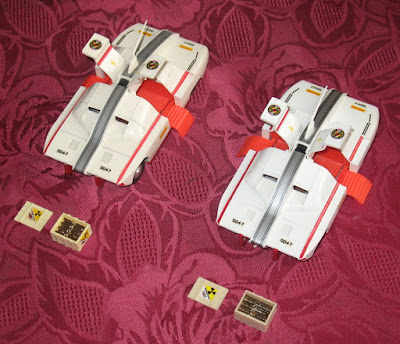 Anyway, on view for your appreciation are both my MSVs.  Can you tell which one is the original Dinky paint job and which one is hand-painted by me?  Go on - have a guess! 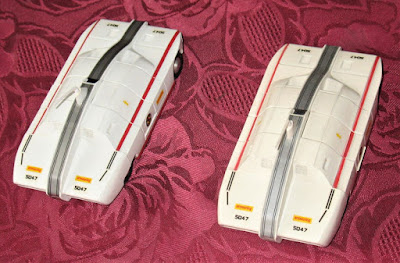 Kid, Radio 4-Extra will be broadcasting a dramatisation of Wind In The Willows this coming Saturday at 4pm if you're interested.

The one on the right

One of the MSVs looks very slightly whiter so I'll say that's the one you painted.

The WITW drama is probably the one you're thinking of.

TG and CJ, both correct. The reason it's slightly whiter is because I used signwriters' paint, and it hasn't discoloured (like the other one has) over the years. Doesn't look hand-painted though, does it? That's because I'm so talented (he said, humbly).

That makes two of us, but, then again, I'm quite easily impressed by some of the things I do. That's probably because I usually expect to b*gger things up, so when they come out all right it's a delightful surprise.