KID KLASSICS: THE GREATEST BRITISH SUPERHERO OF ALL?

Back on October 6th, 1976 (wow, forty years ago), MARVEL's
U.K. answer to CAPTAIN AMERICA went on sale in newsagents all
across the country.  The accompanying scans come from the very copy
I purchased from JOHN MENZIES in my local shopping centre on
the way to work that morning all those years ago.

CAPTAIN BRITAIN was a first for Marvel U.K. - the debut of an
all-new, specially created superhero, as opposed to the diet of reprints
from across the pond we had hitherto enjoyed with rabid appreciation.
The strip was still produced in America (though writer CHRIS CLARE-
MONT and artist HERB TRIMPE had British connections), but set in
England, and featured the kind of mockney-Cockney dialogue that
our Yankee cousins imagine we all speak like.  (Think DICK VAN
DYKE in MARY POPPINS and you've got the picture.)

Various hands have guided the LONDON LION in different and
diverse directions since his first humble beginnings in '76, but despite
basically being a SPIDEY knock-off, there was an unconvoluted in-
nocence about CB's early tales which was refreshing.  But don't take
my word for it.  Judge for yourself as BRIAN BRADDOCK's initial
voyage of discovery now unfolds before you for your reading
pleasure.  Ready?  Hold on to your hats and off we go! 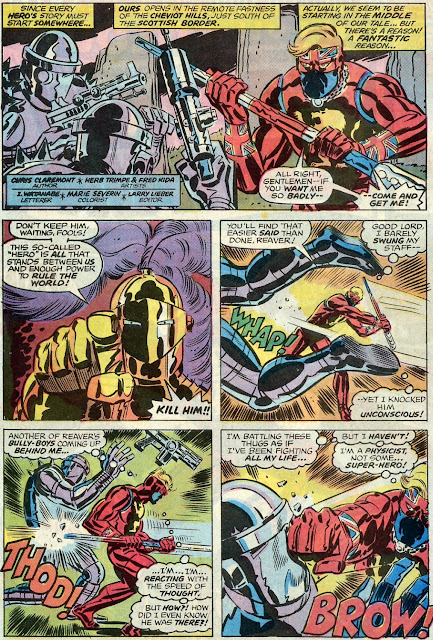 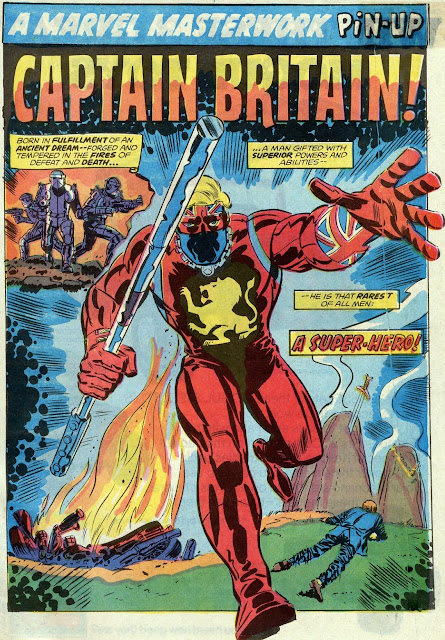 Unfortunately, the budget didn't stretch to full-colour throughout the
mag, so the FANTASTIC FOUR reprint had to settle for Letratone,
although by now the printing standard was good enough to reproduce the
grey hues without turning them into the muddy mess that had blighted
many earlier weekly titles.  NICK FURY, AGENT Of S.H.I.E.L.D.
brought up the rear of the comic, which had returned to colour for
JIM STERANKO's classic tales of super-espionage. 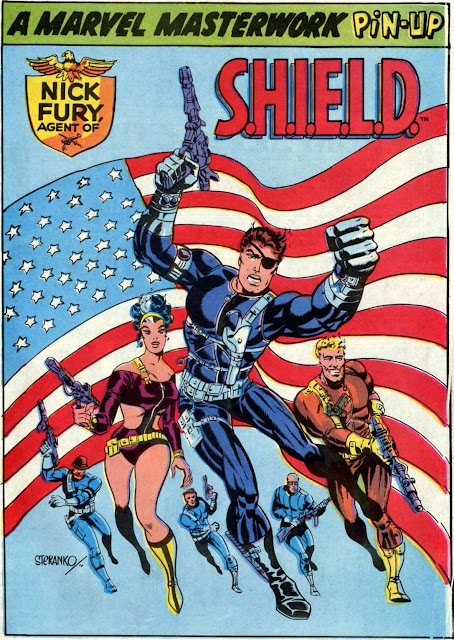 So there you have it!  Britain's Brian Braddock battling the
bombastic baddies of the brutal JOSHUA STRAGG - The REAVER -
for the very first time in a classic tale from the vaults.  Now don't say
I'm not good to you, 'cos it simply wouldn't be true.
Posted by Kid at Saturday, October 08, 2016

I have to say I was pretty underwhelmed by Captain Britain at the time despite being a fan of Herb Trimpe's work (and I quite liked what he and Fred Kinda art-wise did on CB) and of course I was always wary of the US version of the UK being England and then the butchering of the English accent and that all English folk were yokels of sorts (to be fair that element wasn't as bad as I thought that would be) - The weekly comic was ok with Steranko's wonderful SHIELD strip and the FF but maybe becasue I was 17 at the time and was getting a tad fed up with most superhero comics (preferring things like Warren, Conan , undergrounds B&Ws instead) it came out at the wrong time. I did like the Alan Davis / Moore version a lot though. CB is probably UKs best superhero but I have a fondness for Billy the Cat.

I was only 10 when Captain Britain #1 came out and I was really excited by the new superhero who was BRITISH (oh no, I sound like a UKIP voter). Thanks for showing these pages, Kid, as I haven't read the full story from #1 since...er, CB #1. And doesn't Brian Braddock look daft with a pipe stuck in his gob - that's what I thought when I was reading CB #1. But what a pity the lovely cover was spoiled with that horrible blurb for the crappy cardboard mask.

Come to think of it, I quite like Billy the Cat as well, PM, 'though Billy didn't have any superpowers. Yeah, CB wasn't perfect by any means, and was cast in the Spider-Man mould, but it was a brave attempt and not a bad little comic overall. Hated the lettering on the early Alan Moore CBs - well below par.

Considering he's meant to be a university student (and therefore a teenager), the pipe does seem a little odd, CJ. However, I suppose it's a shorthand way of visually conveying that someone is meant to be brainy. Nowadays, of course, the pipe wouldn't be allowed, as it would be viewed as giving a bad example to youngsters.

Add my thanks to CJ's, Kid! You know I'm a fan too, albeit a back-to-front convert. I "turned on" ( in a non-naughty way!') to the new CB, because of the similarities to Warrior's Marvelman stories and rediscovered ( and really liked ) the "British Spidey" sometime later.
So yes, definitely one of the UK's greatest super-heroes, but, how can I choose one over another?

I feel exactly the same when it comes to choosing a 'Babe of the Day', JP.

CB was ok. But I admit the Steranko stuff blew my mind.

I think it blew Steranko's mind as well.