THE GHOST-WHO-WALKS (OR: YOU'RE TOO OLD FOR PHARAOH TALES)...

Comics creators who contributed to CHARLTON COMICS were allowed a freedom that wasn't offered by other comicbook companies.  Charlton were reputed to pay the lowest page rates in the business, but writers felt compensated by the lack of editorial 'interference' that was par for the course at MARVEL and DC (and doubtless other comics publishing companies as well).

So, good for the writers and maybe even the artists, but that didn't always necessarily translate into a superior product for the readers.  Case in point: The PHANTOM #32, published in 1969.  The plot involves a fake Pharaoh Phantom who seeks to usurp the position of the true 'Ghost-Who-Walks'.  Strangely though, the other Phantom is in Egypt, not Bengali, where the genuine Phantom has his jungle kingdom.

It's an entertaining enough little tale.  A royal sarcophagus is discovered during an excavation in Egypt's Valley Of Kings.  The lid is pried open and a mummified figure is exposed, who soon magically unravels and is revealed as The Pharaoh Phantom, who declares the real Phantom to be an imposter.  By use of seemingly supernatural means, the fake performs impressive displays of power that puts the genuine article deep in the shade.

As you can see in the accompanying pages, he's eventually exposed as the fraud he is, but - wait a minute - no explanation is ever given as to how he managed to plant himself in that sealed sarcophagus in a closed burial chamber to begin with.  His magical images from the past are shown to be the result of a projector on a screen, but just how did he manage to create these filmed images?  A huge budget would surely be required, and if they were merely extracted from a movie, it would be obvious.  I'm sure that most readers would've liked to know how he accomplished it, and have found the story more rewarding as a result.

STAN LEE, I'm sure, wouldn't have let this story pass without these aspects being explained, but whoever edited this issue obviously thought such things unimportant. I disagree.  Creative freedom is all very well, but it's no excuse for laziness.  The readers deserve better, and had Charlton insisted that their writers put in a little more effort (and paid them better), the company might yet be around today. Verdict?  Charlton produced lightweight, entertaining comics, but they could have done far better.

Got a view on the matter?  The comments section awaits. 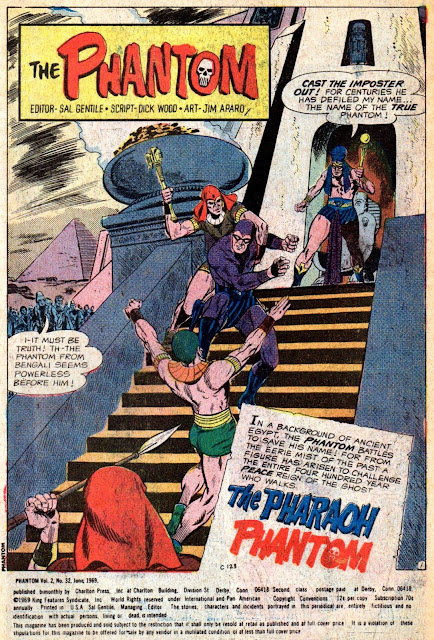 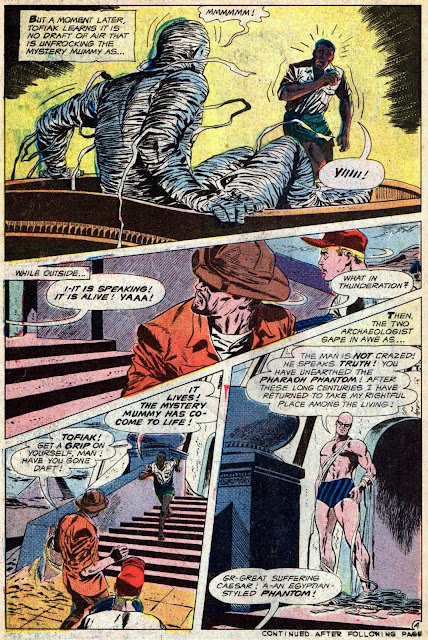 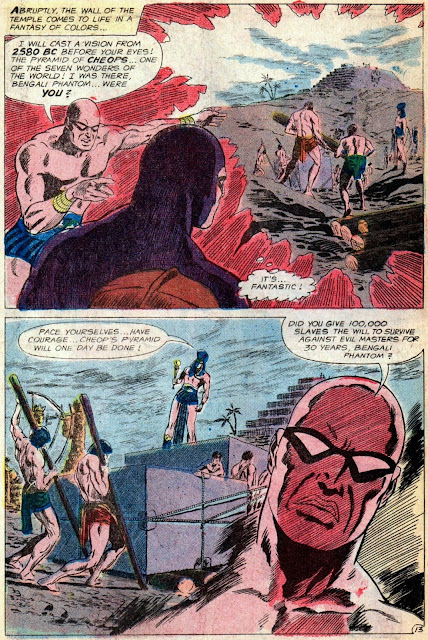 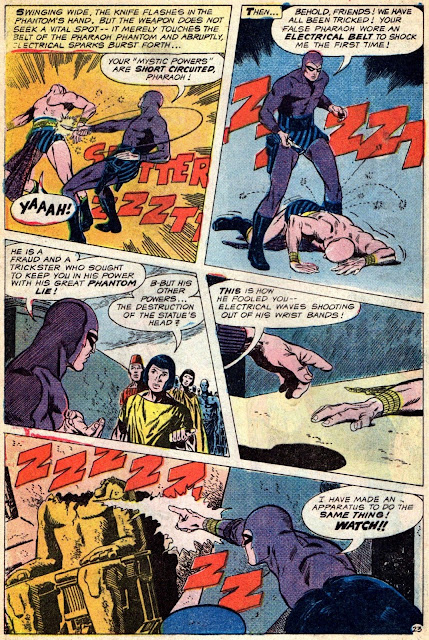 And, in Phantom #31, there was a story where a wealthy explorer crashed his airplane in the Himalayas and discovered the lost civilization of Shangri-La. The inhabitants invited him to stay, but they said they needed funds. He returned to the outside world and rounded up his millionaire friends. They loaded up their money, and flew back to the lost city. They invited the Phantom to join them, but he begged off. Then he stowed away in the cargo hold of their plane, and followed at a distance after they landed. Of course, it was all a fraud, to kidnap the men and steal their money. (The plane crash had been rigged to lure the explorer there.) The Phantom rescued them, and they returned home. (The villains crashed their helicopter and were killed while chasing them.)

Even when I was ten, none of it made sense. The victims never asked why people in an isolated community would need American/British/European currency. (Since the lost city presumably had no contact with the outside world, it would have to be totally self-sufficient.) And building the fake Shangri-La (or even renovating it, if it already existed and the crooks had found it abandoned) would have cost a fortune, probably more than the villains could hope to gain by kidnapping the millionaires.

In general, the quality of Flash Gordon and The Phantom went down when Charlton was publishing them. They usually did have decent artwork, though. Phantom #31 was the first time I saw Jim Aparo's work. In fact, several good artists and writers got their start at Charlton before graduating to better-paying jobs at DC and Marvel.

I was given 7 Charlton Phantoms recently by a friend, TC; 2 drawn by Jim Aparo, 3 unnamed, and 2 by Don Newton. Another example of lacklustre editing is the lettering, which although is mainly okay font-wise, has too many word-breaks, some seriously dodgy. (The word 'been' rendered over two lines as 'be-en'.) A tighter control should've been exercised in my estimation, which would have ensured a superior product. Mainly, the stories make for a diverting read, but don't bear too much thinking about.

Somebody - I can't remember who - said that they made more money working at Charlton than at DC or Marvel, because they took everything he delivered and never demanded changes.

I never knew there were Charlton comics when I was a kid, though I saw their stories reprinted in Alan Class books - Steve Ditko stories that looked and felt strange compared to his Marvel output. Reading some a few years ago they still felt strange, mainly because their twist endings frequently don't quite work.

I never really "got" the Phantom's appeal , then again 90% of my exposure to the character was via the Charlton books and despite (imho) some top comic book art (in particular Don Newtons run) I also found the stories were full of plot holes at times. Although I really like Pat Boyette's art I was never a big fan of his work on the The Phantom, a character he seemed to draw at Charlton for what seemed like a lifetime ( itwas probably only a few issues in reality though).

If anybody ever made more money at Charlton, JW (and I guess it would be a writer), it's more likely because they merely hacked it out as they knew it would be accepted, plot holes and all. At least Charlton gave us E-Man, which was a nice little mag for the time.

I think the first time I saw The Phantom, PM, was in TV Tornado. The character was intriguing, although I don't recall any particular stories. Charlton comics often gave the impression of lacking any real care and attention, which was a shame. I'm sure (or at least I hope) there must be better ones that I've not yet discovered.

I' ve seen a few of the newspaper strip collections in FP by Lee Falks and Sy Barry which looked pretty nice . Ahhh E-Man one of my all time favourite characters/comics despite there short comings I have a soft spot for Charlton comics, in general.

Yeah, they still had a kind of charm, didn't they? And had I read these Charlton Phantom comics as a kid, I'd probably have loved them and not noticed the plot holes and dodgy word-breaks.