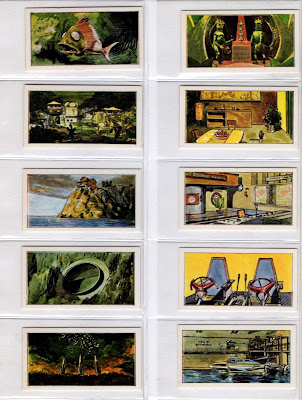 Time once again for some more STINGRAY cards
from sweet cigarette makers CADET.  I don't know who
the artist is, but he's done a superb job of capturing the mood
of the programme.  Considering that kids in the 1960s would've
only seen the show in black & white, these cards would've made
more of an impact for being in colour, as along with the strip in
TV CENTURY 21, they were just about the only way (as well
as a few toys) viewers could see TROY TEMPEST and his
craft and crew outside of their monochrome TV broad-
cast.  (Even though the show was shot in colour.) 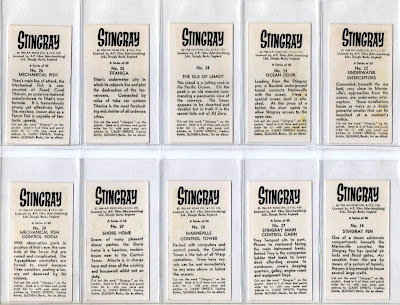 I shan't miss it, Kid!
Nor the Thunderbirds cards!
Hey, I saw ALL the Anderson shows in black and white, but everything from Stingray onwards, I remember in colour, thanks to the comics!

Same as me, I think. And 'though Supercar and Fireball Xl5 appeared in comics or Annuals in colour, I still remember the shows as b&w. Odd, that.

I remember the marionette shows and UFO in B&W. After that, we got a color TV, and I saw Space 1999 in color.

I don't recall ever seeing any comics based on Gerry Anderson shows until I saw some posted on this blog. I think Gold Key may have published a Fireball XL5 comic sometime around 1964, but I never had it.

Gold Key did indeed publish a Fireball XL5 comic, TC, and the stories (and cover) from it are on this blog somewhere. You never had the comic and I've got two of them - I feel so selfish (but I'll live with it).