Y'know, it's an odd thing, but I associate the 21st century more with the mid-'60s than I do with the present day.  That's doubtless because I, like many kids of the time, was exposed to the 21st century through the TV puppet programmes of GERRY ANDERSON, the pages of TV CENTURY 21, and various other items of SUPERMARIONATION merchandise.

I don't especially remember having the sweet cigarette cards by CADET - certainly not the full set of them, though I may've had a few, but one look at them takes me right back to 1964 and forward to 2064 at the same time.  That's because the images are so strongly associated in my mind with  those times, that even though I may not have had the cards, it seems that I did.

However, that's neither here nor there - you're here to see the cards, not read nostalgic nonsense about my childhood.  So feel free - paste your peepers to the pulsating pictures set before you.  The comments section awaits your input. 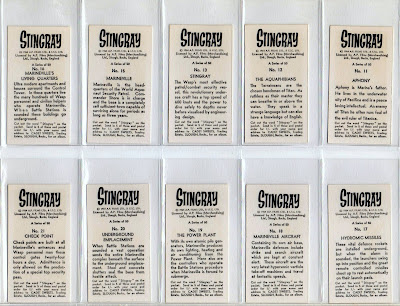 Yep, the future's definitely turned out to be a disappointment, after all the build-up it got 50 years ago.

Pretty much what Alan Fennell (the first editor of TV21) said to me in a letter a few years before he died, BS.

In the mid-1960's, we all thought that "the 21st Century" meant a time when everyone would be living in high-rises and flying around in those George Jetson cars. Robot maids would be doing the housekeeping. On holidays, people would fly to vacation resorts on Mars or Venus.

As one of America's greatest philosophers, Yogi Berra, once observed, "The future ain't what it used to be."

OTOH, it could be worse. "Judge Dredd" and those other British strips portrayed "2000 A.D." as a time when a nuclear holocaust had turned Midwestern America into a wasteland, and the surviving cities on the coasts were ruled by fascists who appointed themselves police, judges, and executioners. America is not like that, although Hollywood and the news media try to make it look that way.

We used to have a programme called Tomorrow's World, TC, which showed the anticipated new technologies of the future. Like you say, robot maids, personal jet packs, etc. Some of them did happen, but only in science labs - they never made it into popular use by the public.

As for 2000 A.D., although I had a measure of pride to be associated with a best-selling (for the time) publication, I was never much of a fan when it first came out. I just found it far too pessimistic and depressing.

I wouldn't know, BS - I don't read much SF. I just know I wouldn't like to live in Mega-City One. What I do know, 'though, is that if you compare episodes of Dr. Who and Star Trek from the '60s, Star Trek was generally the more intelligent, better-written show of the two.

Yes, we should all be wearing silver suits and travelling by monorails by rights!
But, what a disappointment! - We don't even have Marty's hover-boards from "Back To The Future"!
Anyway, thanks for the cards, Kid! I had a few Thunderbirds, but had none of these!

Remember to click on the images, then click again, JP, to enjoy them at optimum size. More coming soon.

Always do, Kidda!
Were there any Supercar or Fireball cards, do you know?

There was a Fireball cards set for definite, 'though I don't know if they were by Cadet - and I think there may have been Supercar cards, but I'm not 100% certain.