Just for the sheer hell of it, here's a stunning illustration by DON LAWRENCE, featuring characters from The TRIGAN EMPIRE.  For the full effect, click to enlarge, then click again.  (Note that there's something wrong with the old fella's left hand pointing at the city.  It's not up to the standard of the rest of the picture.) 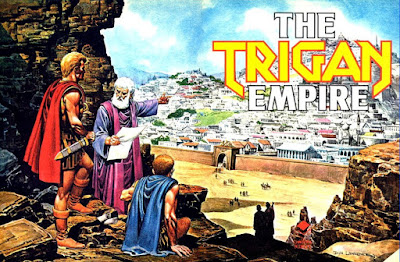 And below is the book you'll surely be wanting to track down on ebay so you can have your own copy of the above endpapers, as well as the origins of The Trigan Empire.  Published by HAMLYN in 1978, it's a book well-worth having.   Good hunting. 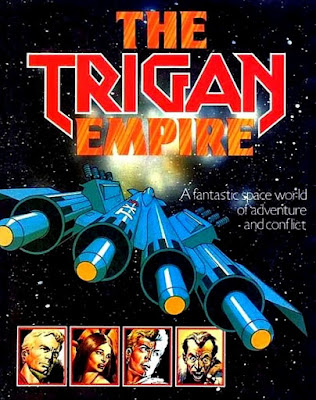 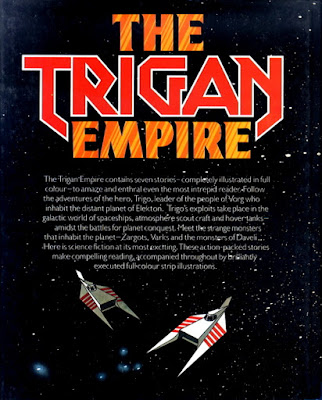 I managed to pick up a big coffee table book "Tales of the Trigan Empire" about 15/20 years ago in one of those surplus book outlet stores for about £3, amazing art. I was aware of the strip previously via "Vulcan" and possibly via a friends "Look and Learn" (I was never one of those swotty gits that bought L&L myself)

Actually, it was Tales From The Trigan Empire (he said, pedantically) and I got my copy for nothing. I bought a run of L&L in the late '70s because some of the art fascinated me (still got 'em), and I bought a 48 issue series of the best of L&L, which included The Trigan Empire from the beginning ('though it first appeared in Ranger). It also came with a facsimile of the original 1st issue and free gift. Very nice. However, I must point out that I wasn't a swotty git either.

Well here's one of the few occasions I don't have to track down one of your book recommendations - I have it already. Not sure where I picked it up (so nothing too memorable about the when and where if it didn't create an association). But I do marvel at how some of these artists managed to turn out the quality art they did on the deadlines they must have had. I'm thinking of Embleton, Bellamy etc.

I bought my copy of the book from John Menzies in Glasgow's Buchanan Street in the late '70s or very early '80s, PC. It was good to see the images again that I'd last seen in Vulcan. I suspect it was because of the strip in Vulcan in the mid-'70s which prompted me to buy my run of Look & Learn in the late '70s, so that I could read the latest adventures. The art on the strip wasn't quite as good by this time 'though. Yeah, the quality (as well as quantity) of colour work produced on a weekly basis by Noble, Embleton, Lawrence, Bellamy, etc., was simply stunning.

To make it short, astronomers thought they had discovered the existence of an unknown planet in the solar system and named it Vulcan. In fact what they were seeing was the effect of relativity.

Er, that's a bit TOO short to do the story justice, Phil. Scientists eventually concluded that a funny wobble in Mercury's orbit could be explained by Einstein's theory of relativity, and didn't, as first thought (based on Newton's laws of motion), require the existence of a planet which they couldn't see, and which they'd named Vulcan. However, visit the link anyway, Criv-ites, 'cos it's interesting.