BABE OF THE DAY - IMOGEN HASSALL... 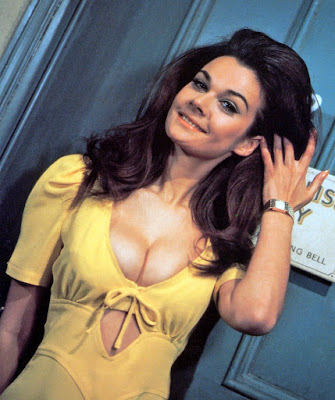 IMOGEN HASSALL was a stunning-looking actress
who appeared in TV shows such as The SAINT and The
AVENGERS, as well as various movies throughout her act-
ing career.  I was shocked to discover only recently that she
committed suicide in 1980, aged 38.  I'd assumed, when-
ever I saw her in anything on TV, that she was still 'out
there', acting away to her heart's content.

Funny how we become so familiar with some thespians
through seeing their movies and shows constantly repeated
on telly, that, even though (unknown to us) they may be long
dead, we consider them still contemporary with our own lives,
and feel like we're welcoming an old friend into our living-
room whenever they pop up on some old film or other on
that box in the corner.  (Or flat screen on the wall.)

Some actors make us smile on sight of them, so
deeply are they ingrained in the memories of our youth,
and we once again enjoy their company for however long
their performance lasts in some old movie or repeated TV
show.  There's a sad side to that though, when the realisa-
tion eventually dawns on us that they took their last bow
and exited stage left, and that the final curtain came
down for them many years ago.

Kid, I've never heard of "The Sant"...was it good ? I discovered only a couple of years ago that Pete Duel from "Alias Smith & Jones" shot himself in 1971 - all those times I watched the show and didn't realise that one of the two stars was dead !

You can take your pick of the following excuses, CJ.

a) That's what I get for not wearing my glasses.

b) I couldn't have hit the 'I' key hard enough.

c) I was just seeing who'd be first to spot the deliberate mistake.

I have a friend who will, while watching old films or TV progs, will, as actors and actresses appear, go "dead", "dead", "dead", "old", "dead","still alive" ....."this is a cursed film - they are all dead" (we try to keep him away from silent films). What is worse? - seeing someone sexy and knowing they are now old or knowing they died young while still sexy? And some people still waste time pondering the secrets of space-time and the fate of the universe.

From their point of view, I suppose it's worse that they're dead. And Imogen would probably still have looked great for a good few years beyond 38, had she not committed suicide. I know that, given the choice, I'd rather be old than dead, although obviously I'll always be sexy regardless of my age. Hell, I'll be sexy dead as well.

I gave up watching uk tv about twenty years ago.
I sat downstairs in the living room earlier,'Have I Got News For You' was on and I was shocked to see that
they had all aged,by about ,twenty years!

I don't look in the mirror while shaving either.

You hear talk about the possible invention of a time machine, er - it's already been invented and it's called the camera. To travel back into time you need only look at a photo or put on a TV series episode or movie in the media of your choice to visit (or revisit) any period in time recorded on film or video. I am quite fascinated by looking at really old photos, and I'm talking 1800s here, or movie footage (much of it available on YouTube) to see people still living over 100 years ago. One aspect is the realization that people have not changed much though what they wear and how they get about has. Only ocassionaly does my mind register that fact that all of these people are now long gone - even the children. Closer to 'home' though I will often revisit the decade that has the fondest memories for me, where I spent my teenager-hood; the 70s, via episodes of the British cop shows, comedies or SF & horror series. Only seldon do I think about this or that actor being now dead or you might see them years later, looking much older and still turning up on those homes for old actors known as Midsomer Murders or any Agatha Christie series. There is one other time travel device, as you have often pointed out and which forms a corner stone of you blog - memory-induced time travel via artifacts from back in the day.

Shaving without looking in the mirror is when having a good memory for faces comes in really handy, Baab.

Well stated, PC. TV, radio, music, comics, books, and old photos are all time machines of a sort. You'll have seen the post I did, called 'A True Account Of Time Travel', and that was really like going back into the past for me - not just my mind, but my actual physical self. At least, that's how it seemed.

I always remember Viz commenting on the passing of most of the Dads Army cast. They called it the curse of Dads Army.

Unfortunately, that's the curse of life - that we all have to give it up one day.

Just gone, has he? That's a shame indeed.

Not only did he give us Dads Army but found some missing episodes in Australia. They were playing an episode on TV and he instantly knew it was one of those wiped at the BBC.

Great stuff. Maybe someone else will find wiped episodes of other TV shows the same way, eh? (Dr. Who for example.)