In the mid-1980s, the original art for the above cover used to sit in the office of BATTLE ACTION FORCE in KING'S REACH TOWER, the (former) head-quarters of IPC Magazines Ltd.  I used to see it when I was collecting or returning work on my weekly visits to London when I was a full-time freelance lettering artist more years ago than I care to recall.  I didn't own the Annual then - it was a later acquisition, and it was likely the familiarity of the cover that made me buy it, but it's a nice book to have on its own merits.

KELLY'S EYE was a long-running strip that took on aspects of Dr. WHO at some point down the line.  It was an interesting premise:  TIM KELLY was invulnerable as long as he wore the EYE Of ZOLTEC, capable of withstanding the full explosive power of a nuclear bomb.  The strip first appeared in KNOCKOUT, switching over to VALIANT when the former merged into the latter in February 1963.  Tim Kelly returned as a guest in the UNIVERSAL SOLDIER strip in the pulse-pounding pages of 2000 A.D. (1987), but it's for the Valiant strips that the character is best-remembered by readers of a certain age.

One of the more ridiculous aspects of the original strip was the way Tim repeatedly announced to both friends and foes alike that the jewel was the source of his powers, something you'd think he'd keep to himself.  True, his statements were really directed at readers, to remind them of just how he accomplished his amazing feats (in case, presumably, they forgot the intro box immediately after reading it), but these proclamations were rather too frequent and conspicuous to seem entirely natural. (Even less so than normal comics' dialogue, that is.)

Anyway, just for you, here's a complete 7 page full-colour adventure from the above Annual, released in August/September 1973.  The weekly comic managed to survive until it was eventually subsumed by BATTLE PICTURE WEEKLY in April 1976. And thus came to an end the glorious 13 and a half year run of one of this country's finest weekly periodicals for boys. 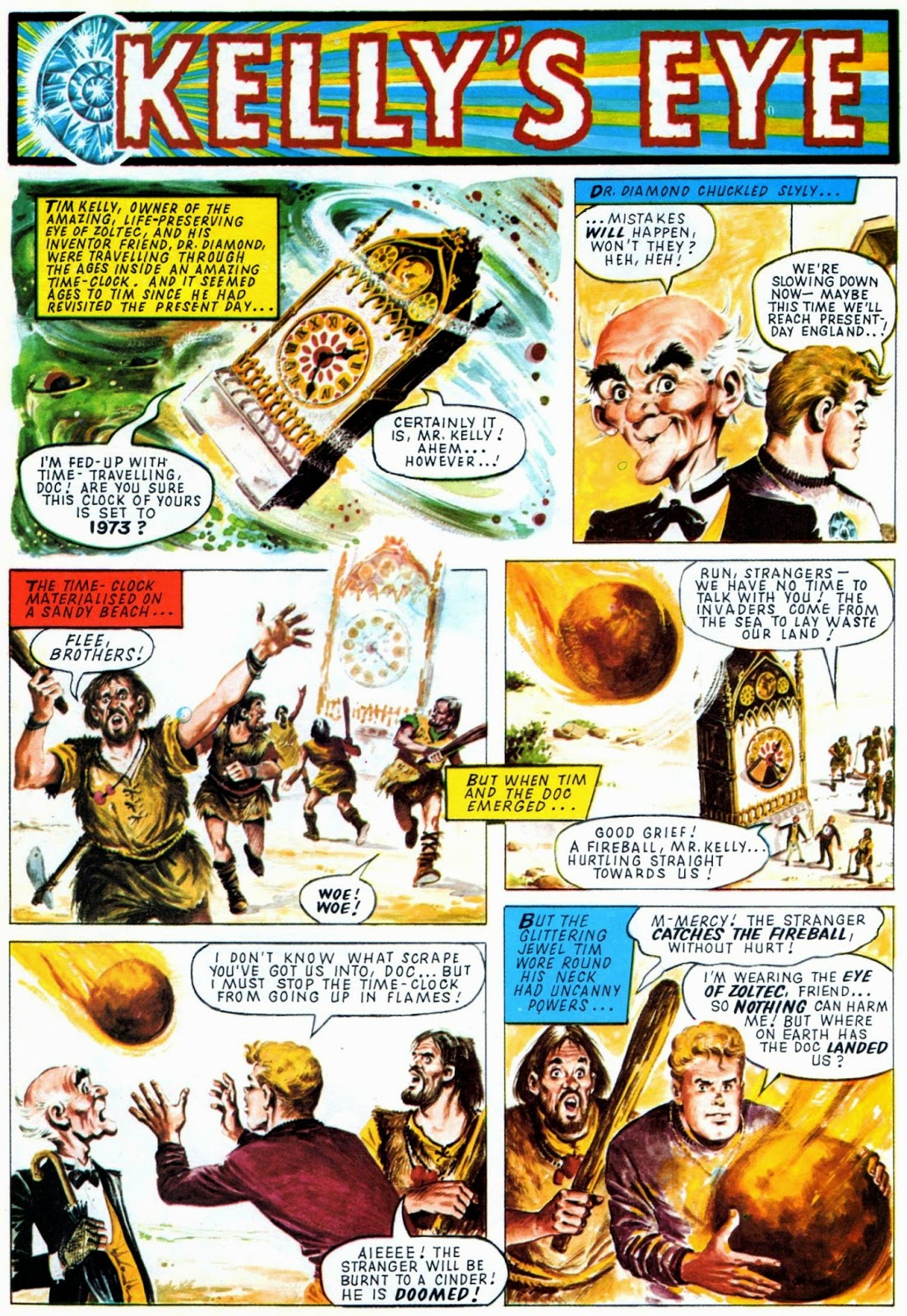 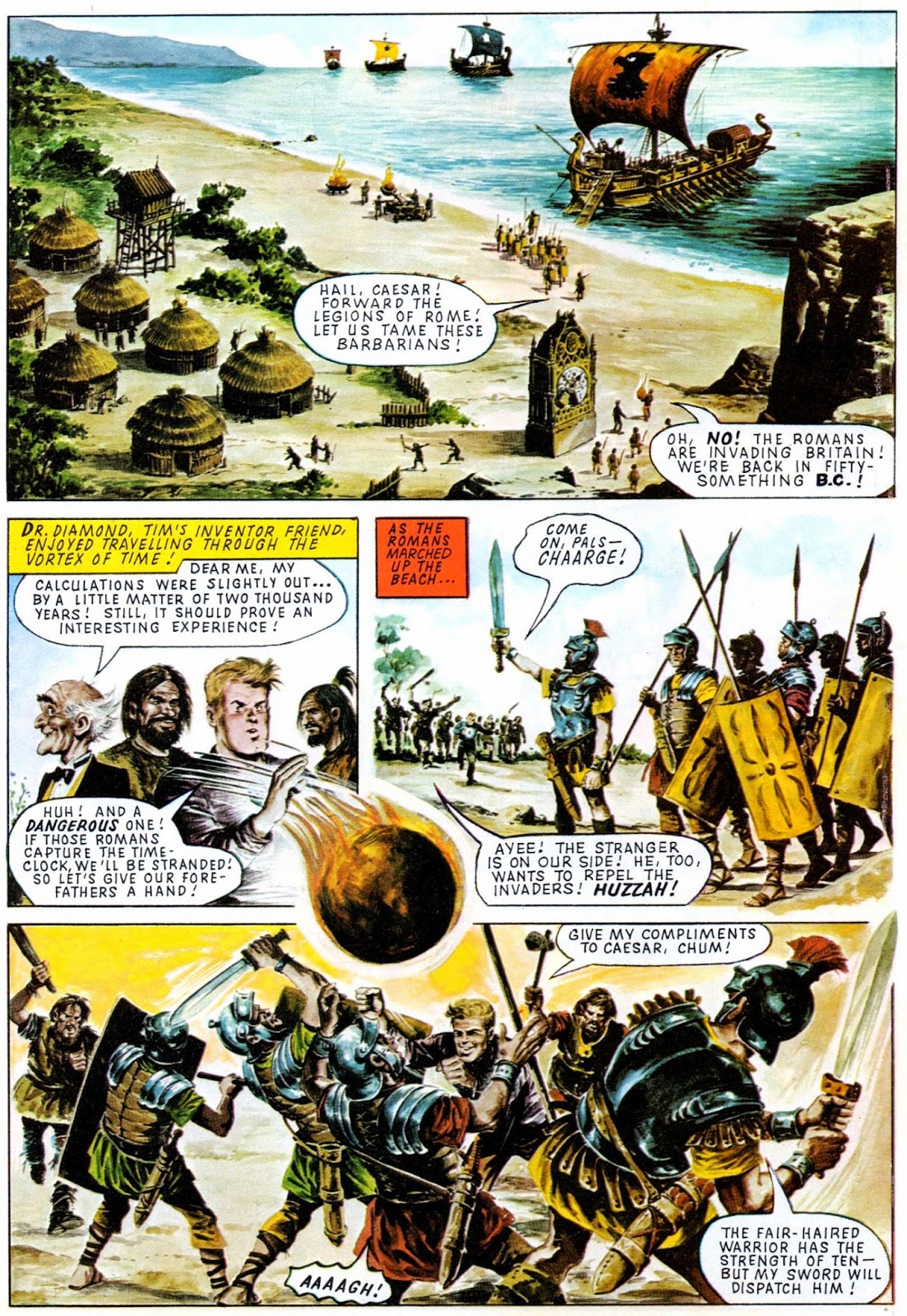 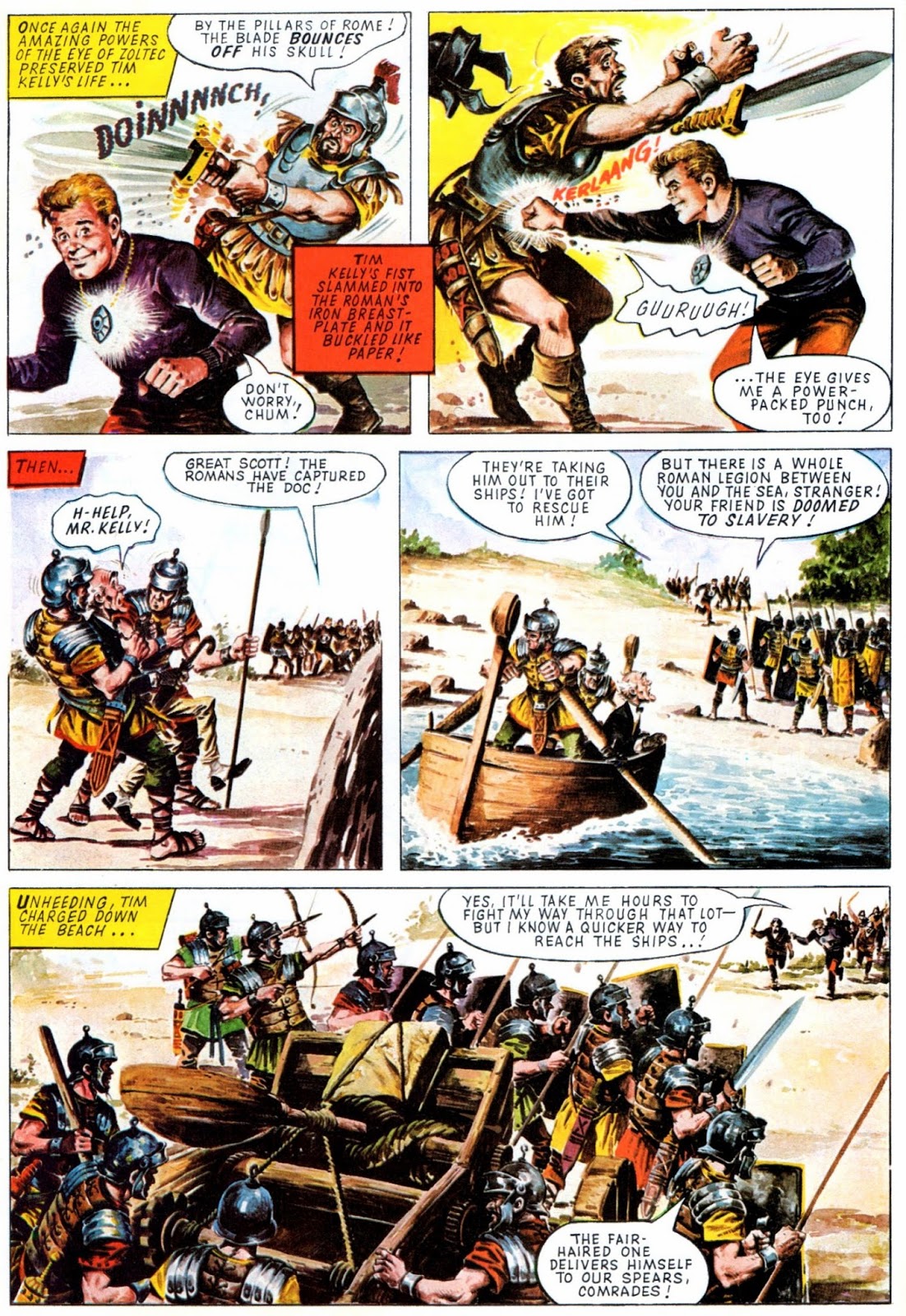 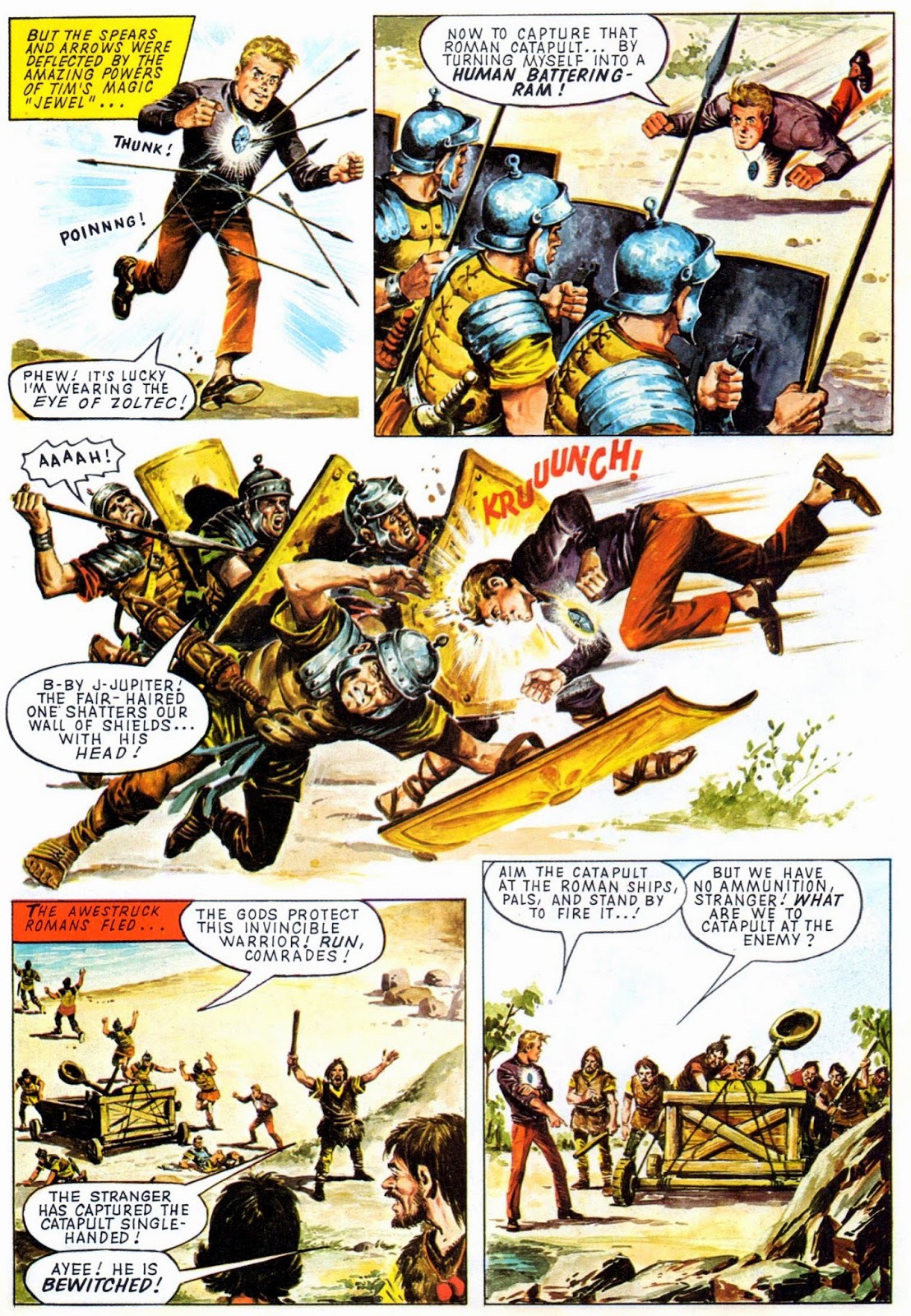 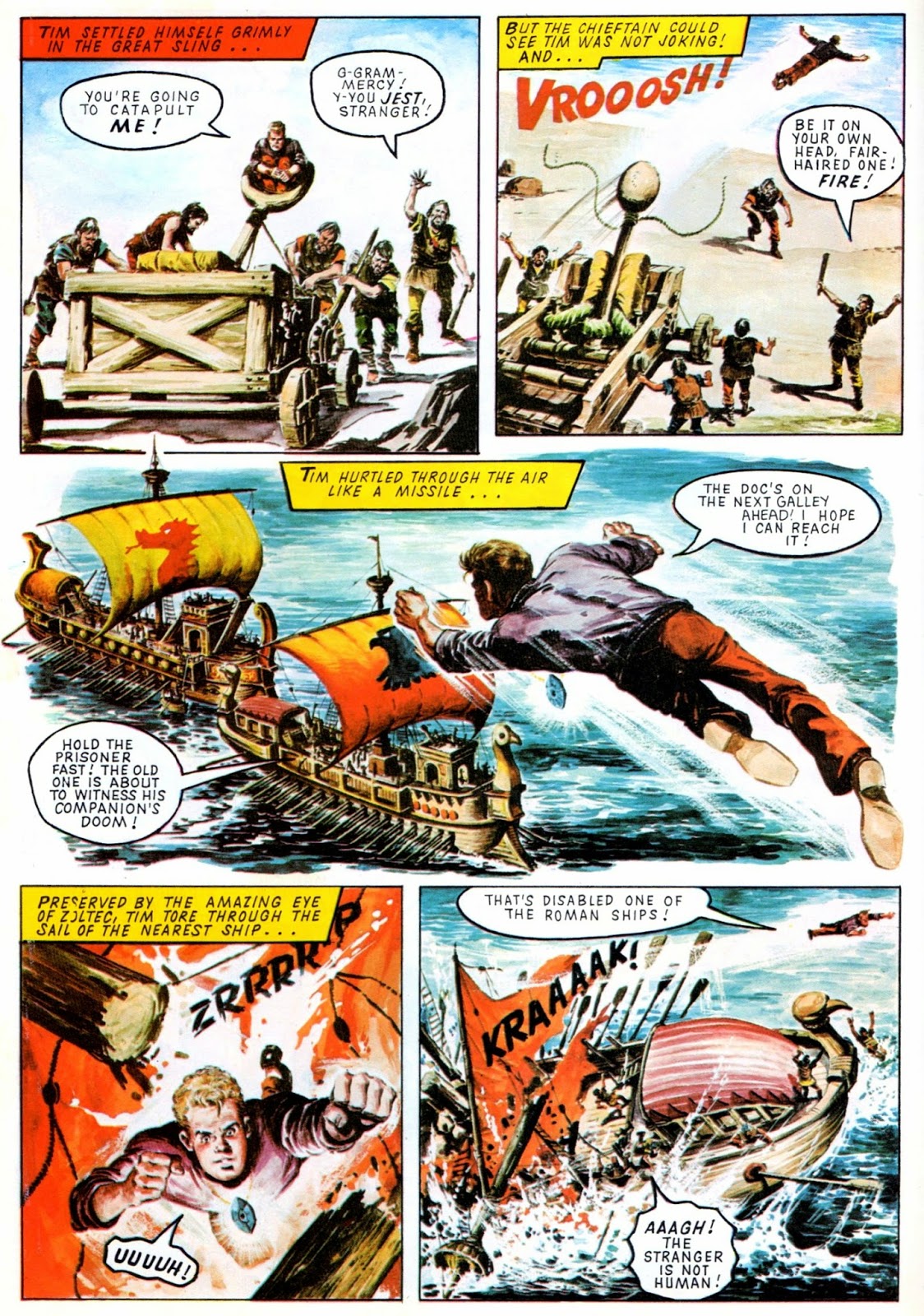 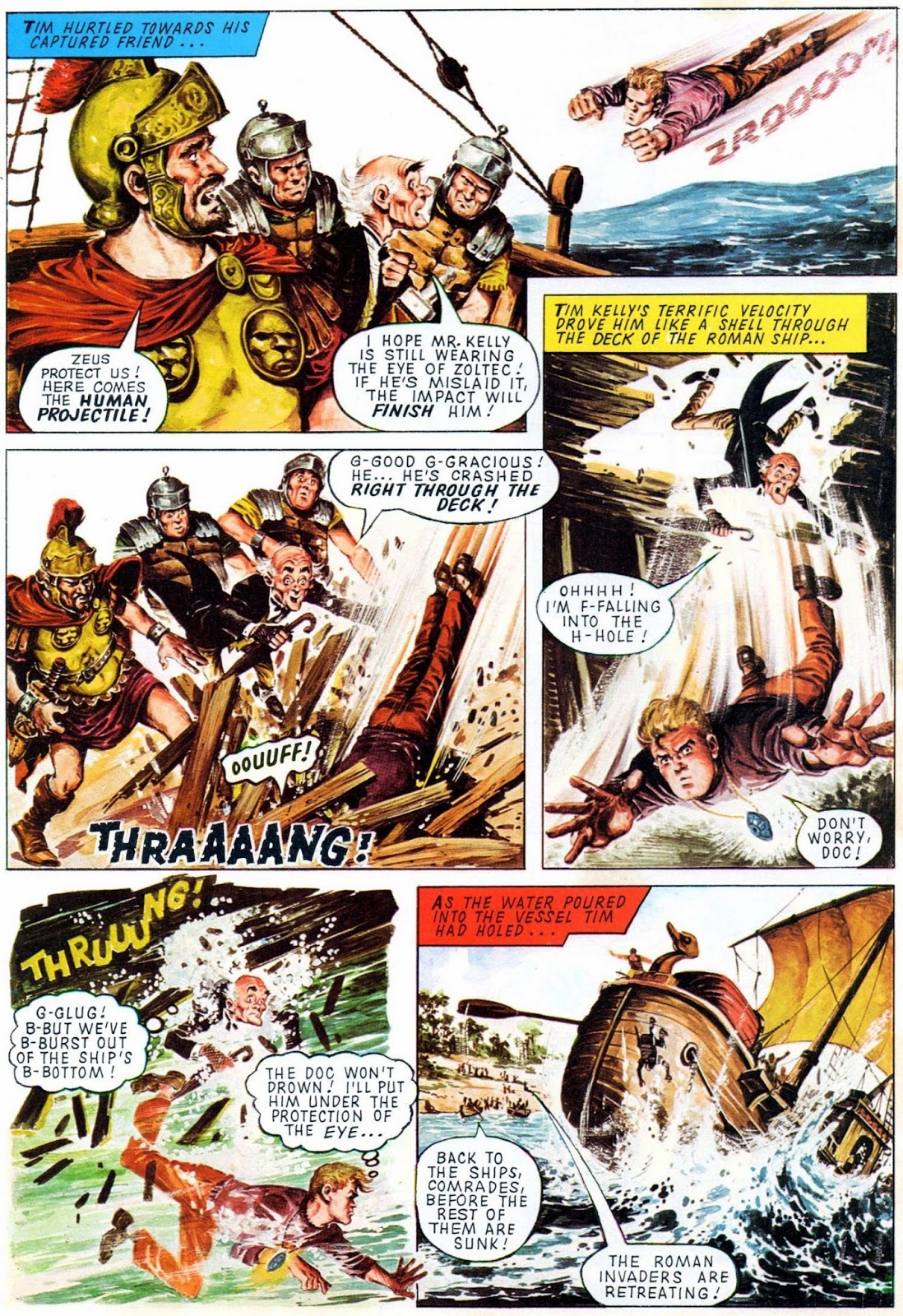 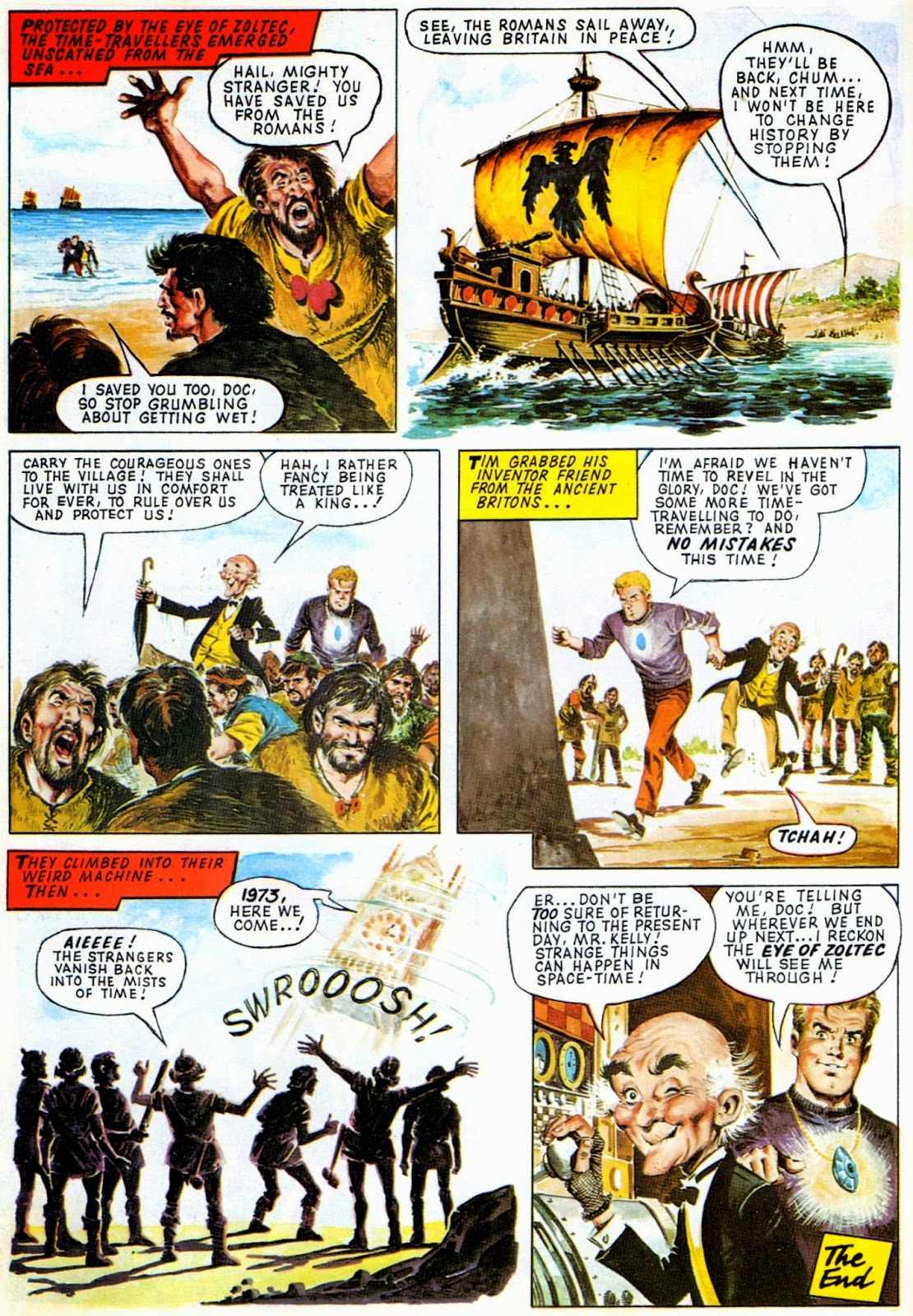 Kelly's Eye was one of my 3 favourite Valiant strips. I particularly like the atmospheric art of Solano Lopez. I never had/read any annuals though, so not used to seeing him in colour.

Just think, JP - we could have Britain's very own version of the Justice League: Kelly's Eye, Robot Archie, The Steel Claw, Adam Eterno, The Steel Commando, Tri-Man and Johnny Future. If only there were a real comics industry in this country, with people who knew what they were doing, we could have home-grown superhero comics providing much-needed work for British contributors.

That is one heck of a team you've assembled! It was always a dream of mine for Robot Archie to team up with the steel commando.
Hey, have you got the Albion comics?-make interesting posts!

I have the collected edition, JP, but not the individual issues. I don't think I'd be able to open the book wide enough to scan it without damaging it, alas.

In the (even) more geeky days of my youth I used to draw ( I was about 11 years old you so were talking stick characters) my own UK superhero group stories based on IPC and DC Thomson characters called The "Protectors of the UK" not realising that the acronym would have spelt out " PUK" (which in hindsight wasn't to far from what I had created))- from memory they consisted of Steel Claw, Kellys Eye, Spellbinder, The Spider. Rubberman, Dollman , Black Sapper, Billy the Cat, Red Star Robinson and Klanky (from Sparky) All of course revamped into Marvel type characters - I think Alan Moore stole my idea for "Albion" although obviously mine had a better plot and deeper characterisation :)

I meant to mention Rubberman, but forgot halfway through, McScotty - one of my favourite characters from Smash!, all those years ago. Although Moore, I believe, came up with the basic idea (after you), it was his daughter and her hubby who wrote the series. Never really worked for me, I have to confess.

Yeah, got to have Rubberman, one of my Smash faves, along with Brian's Brain.
Of course, Alan Moore cameod a few British heroes ( names changed ) in Capt. Britain. Then later many turned up in 2000AD's Zenith.

Including Black Bob (in Zenith).

Someone who I think did the UK homage thing much better than Albion even manged was the amazing Paul Grist in Jack Staff he had a version of just about all the IPC and DCT characters including Robot Archie, General Jumbo, and Janus Stark with a nod to (amongst others) Steptoe and Son and Dads army great stuff if you haven't read it I thoroughly recommend it

I've heard of it, McScotty, but never read an issue - I'll keep an eye out for it. I never got to read your deleted comment on Comic Bits Online - if you can remember what you said, send me a copy as I'd be interested in your views.