When DAREDEVIL #227 hit the newsagents' spinner-racks and comicbook shelves back in 1986, readers sat up and took notice.  Over the course of seven issues, the story of MATT MURDOCH's complete professional and psychological disintegration at the scheming hands of The KINGPIN unfolded in a taut, suspenseful superhero action thriller that demonstrated just how comics of this kind should be written - and that FRANK MILLER was just the man to write them.

DAVID MAZZUCCHELLI's art was moody and magnificent, and is a perfect example of the heroic heights that the medium of sequential art is capable of attaining.  Apparently, there have been a couple of attempts to raise interest in a movie adaptation of this classic series, but nothing ever materialised and the film rights have now reverted back to MARVEL STUDIOS.  We can all only live in hope that a blockbuster movie of this epic adventure will one day reach cinema screens and be a massive hit like The AVENGERS.

In the meantime, you'll have to console yourselves with our two part cover and image gallery scanned from the original comics.  The series was released in a collected edition back in 1987 and again only a few short years ago, so you should yet be able to pick up a copy from your local comicbook store - or ebay, even.  If you don't have these classics in your collection, then you're really missing out, man - do something about it today!

See you in Part Two! 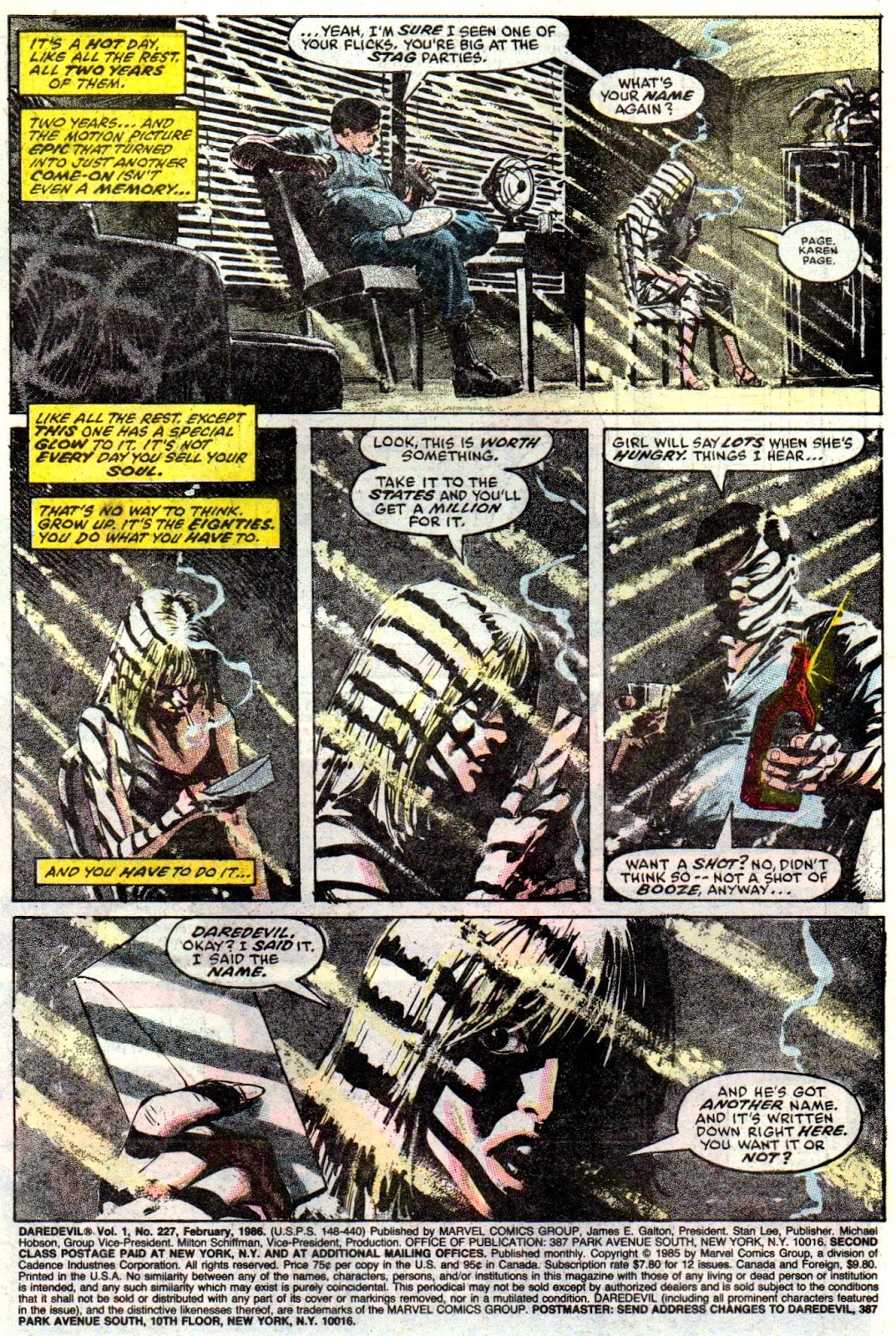 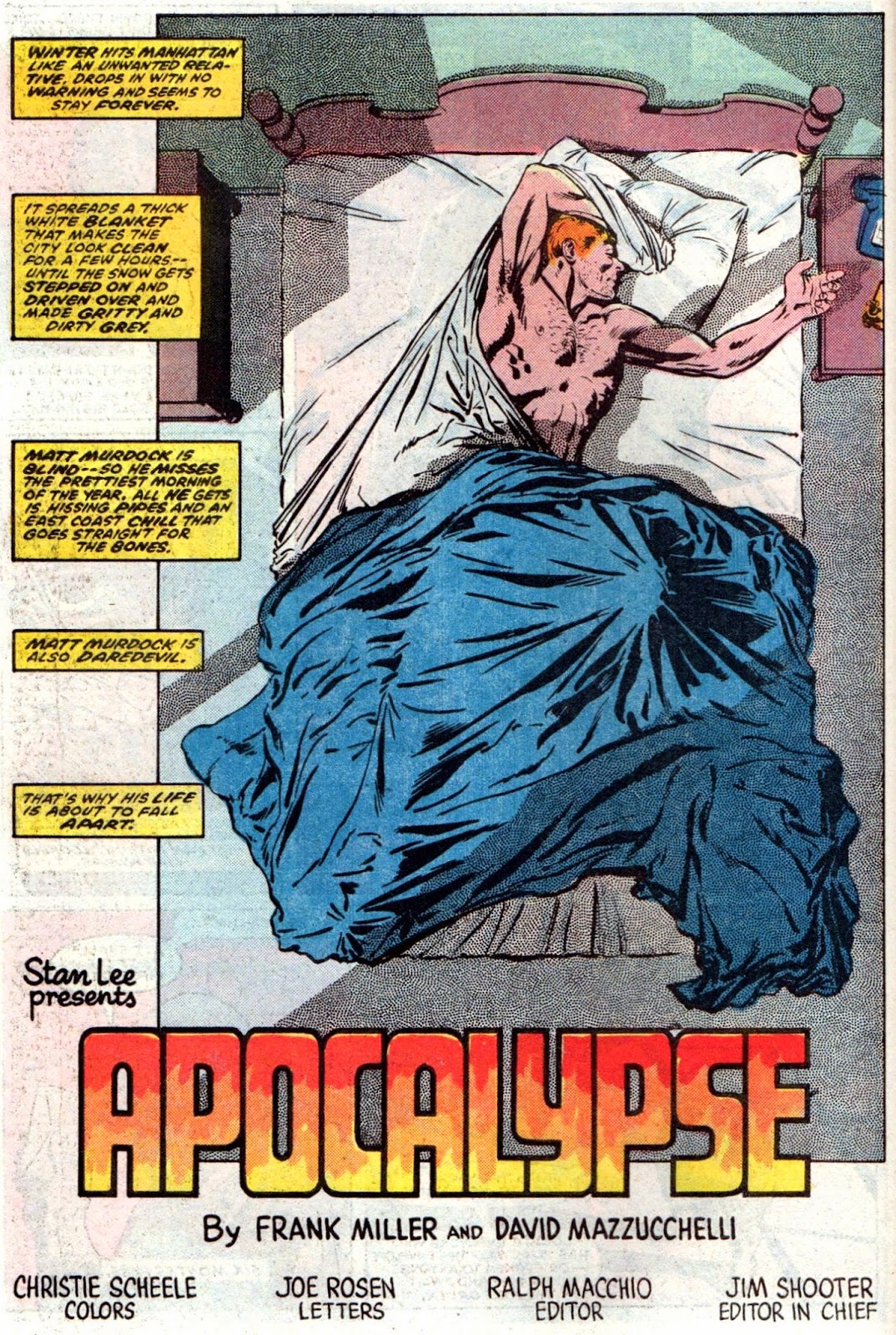 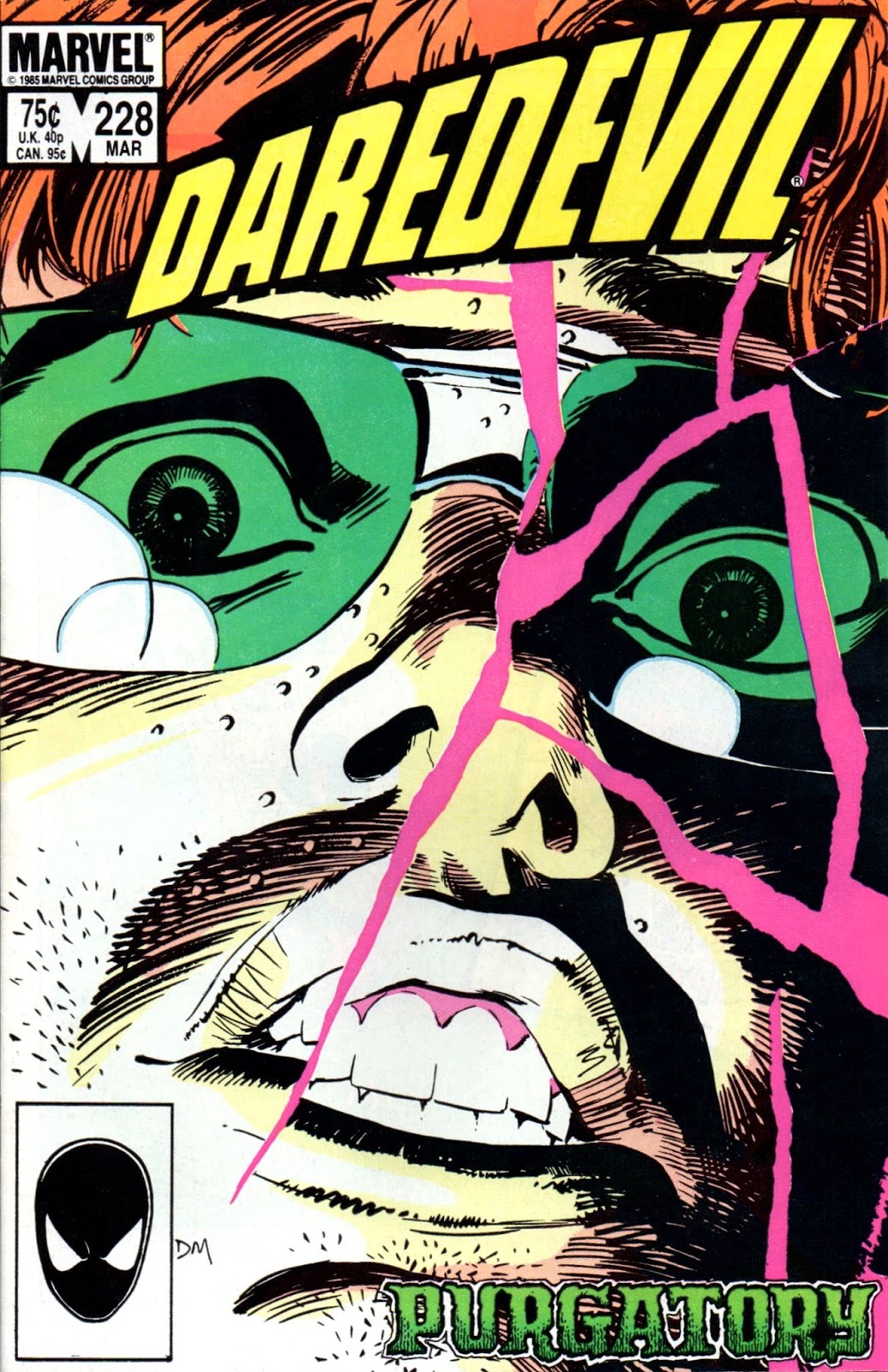 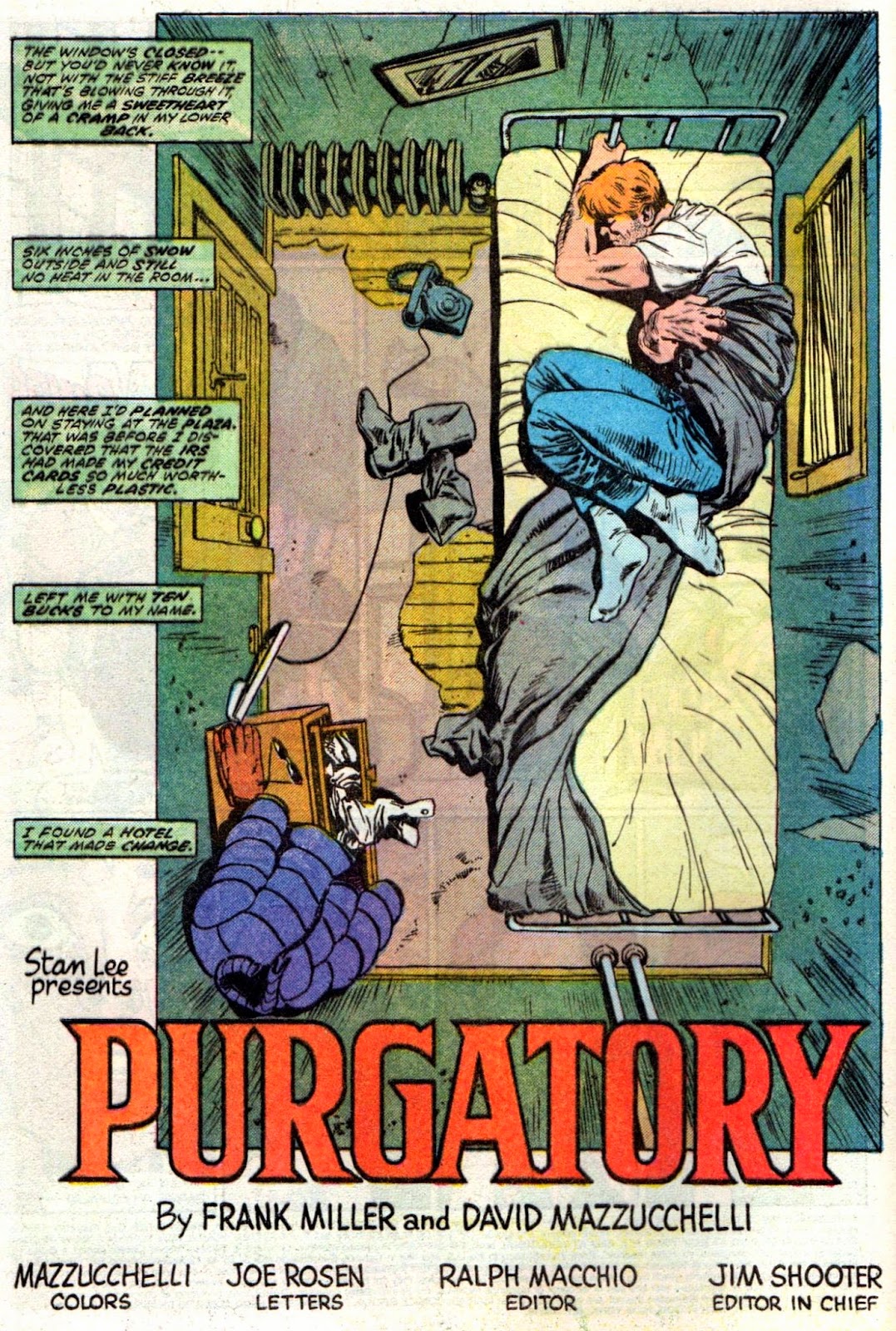 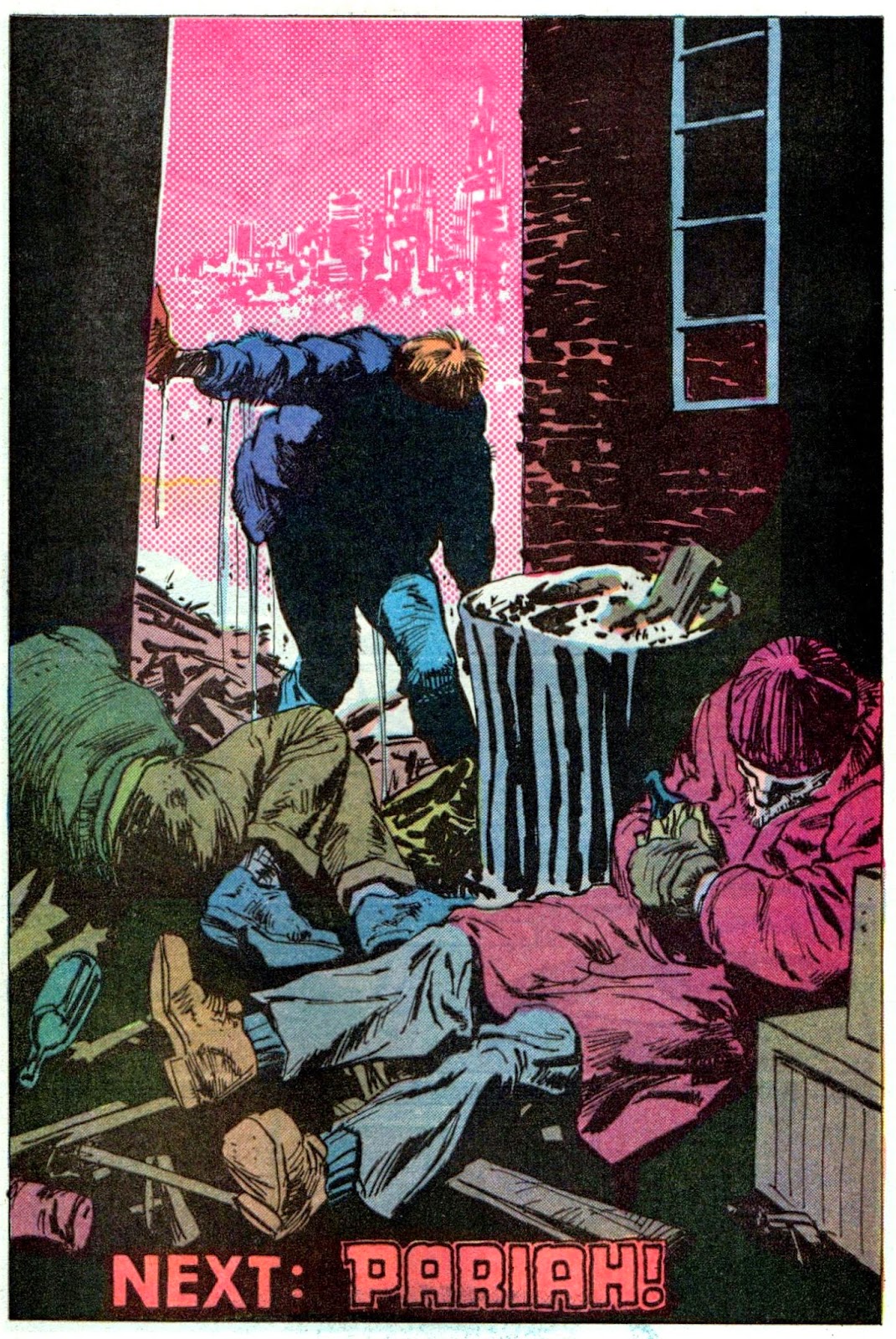 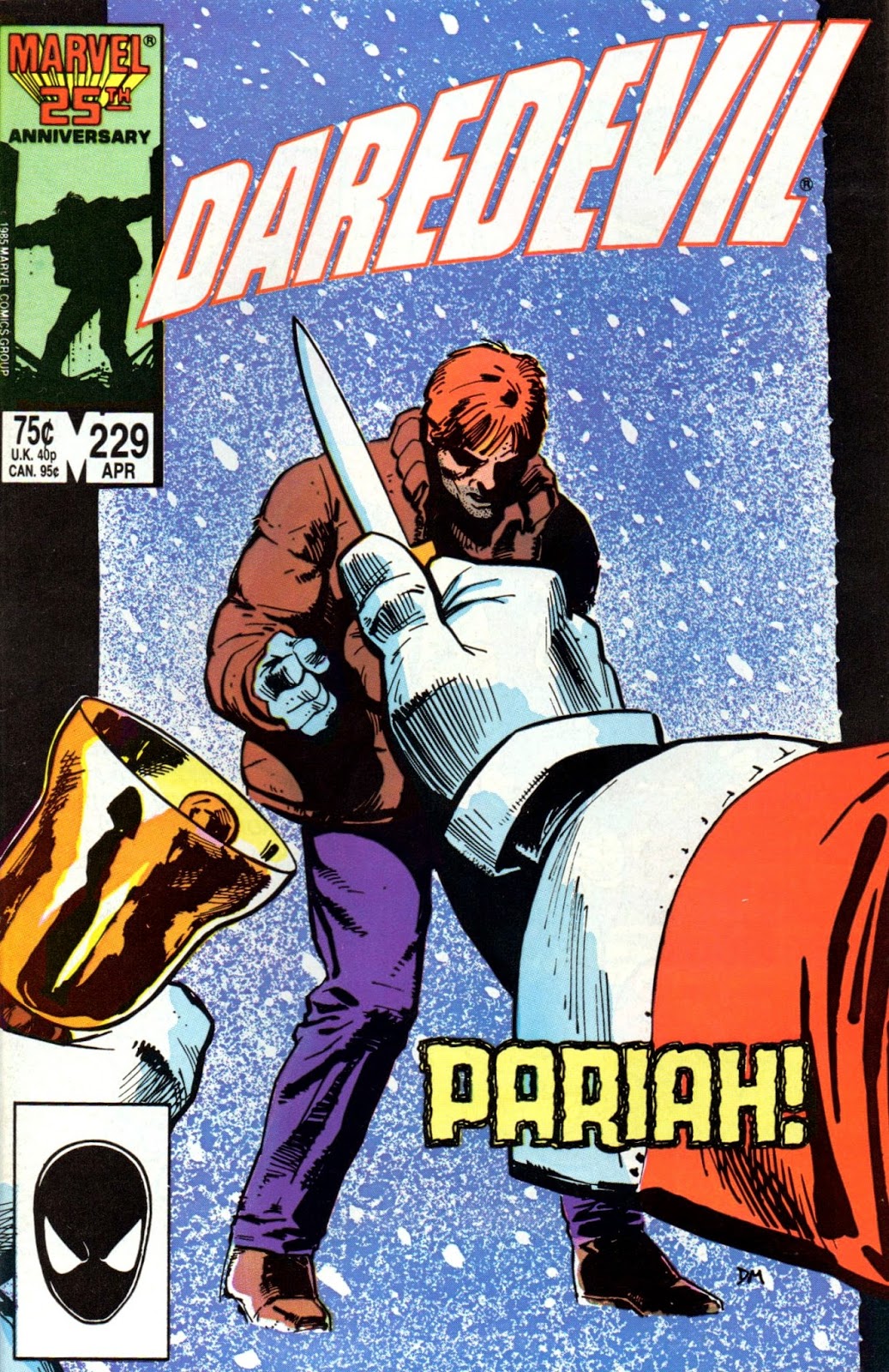 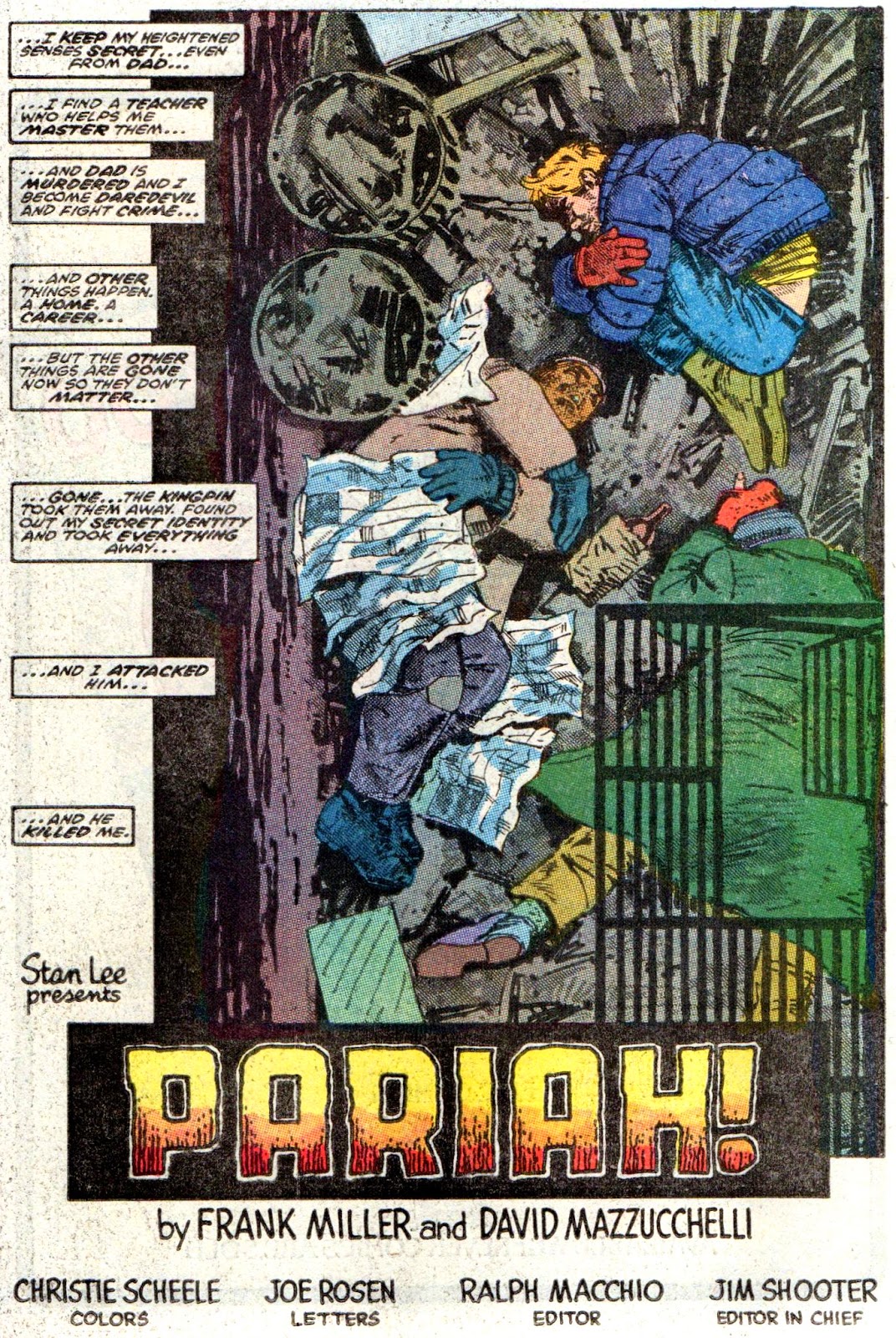 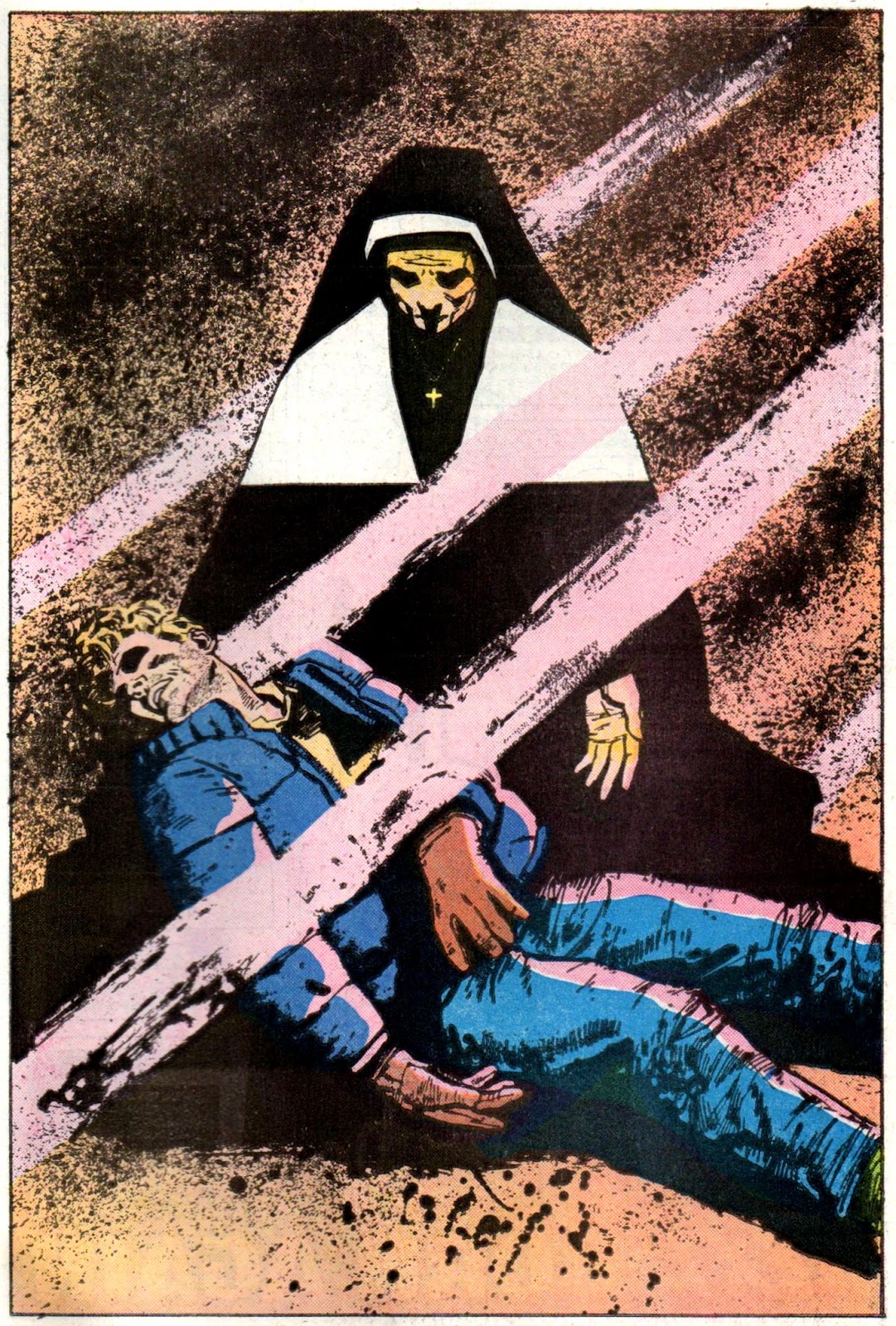 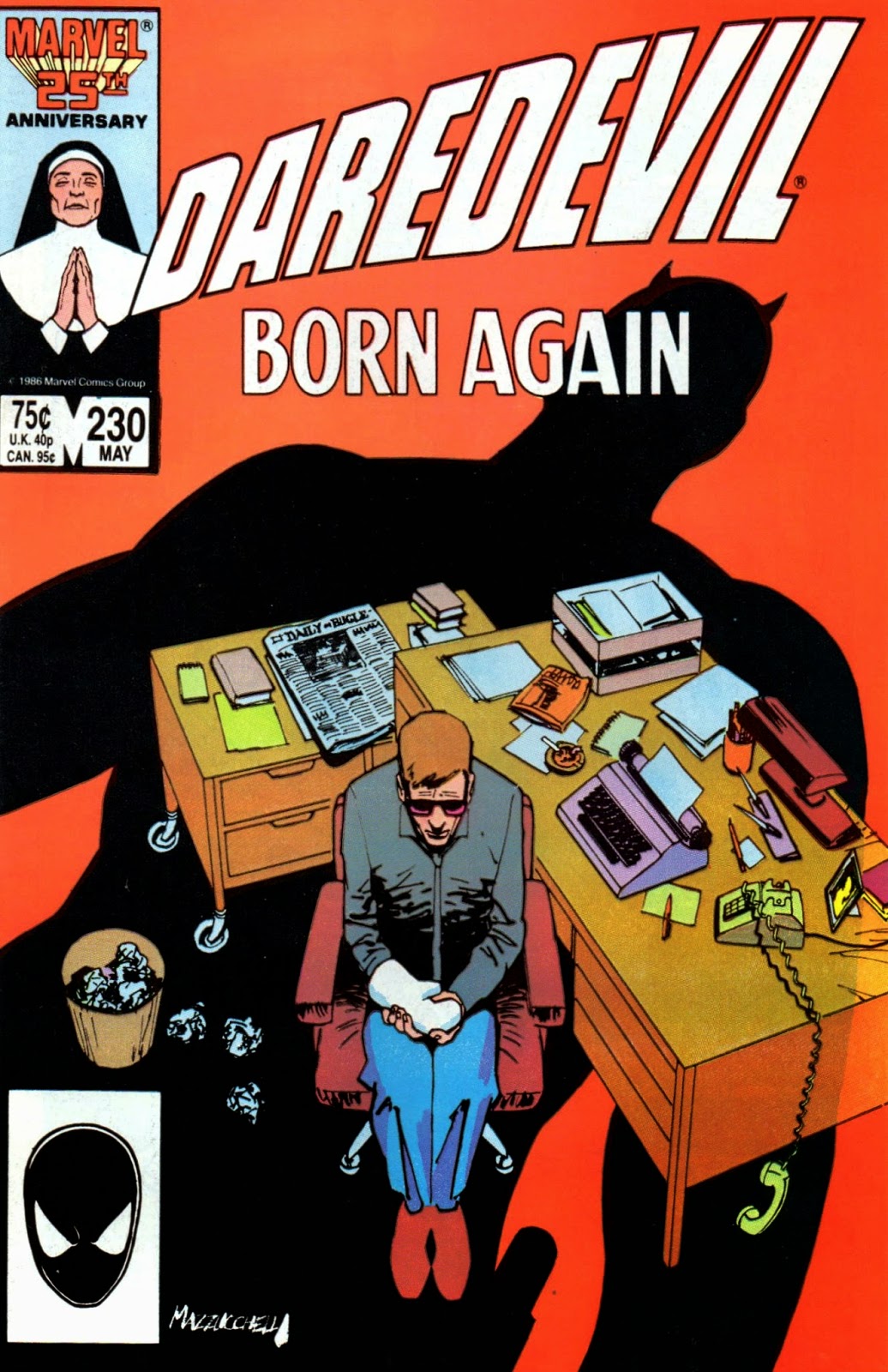 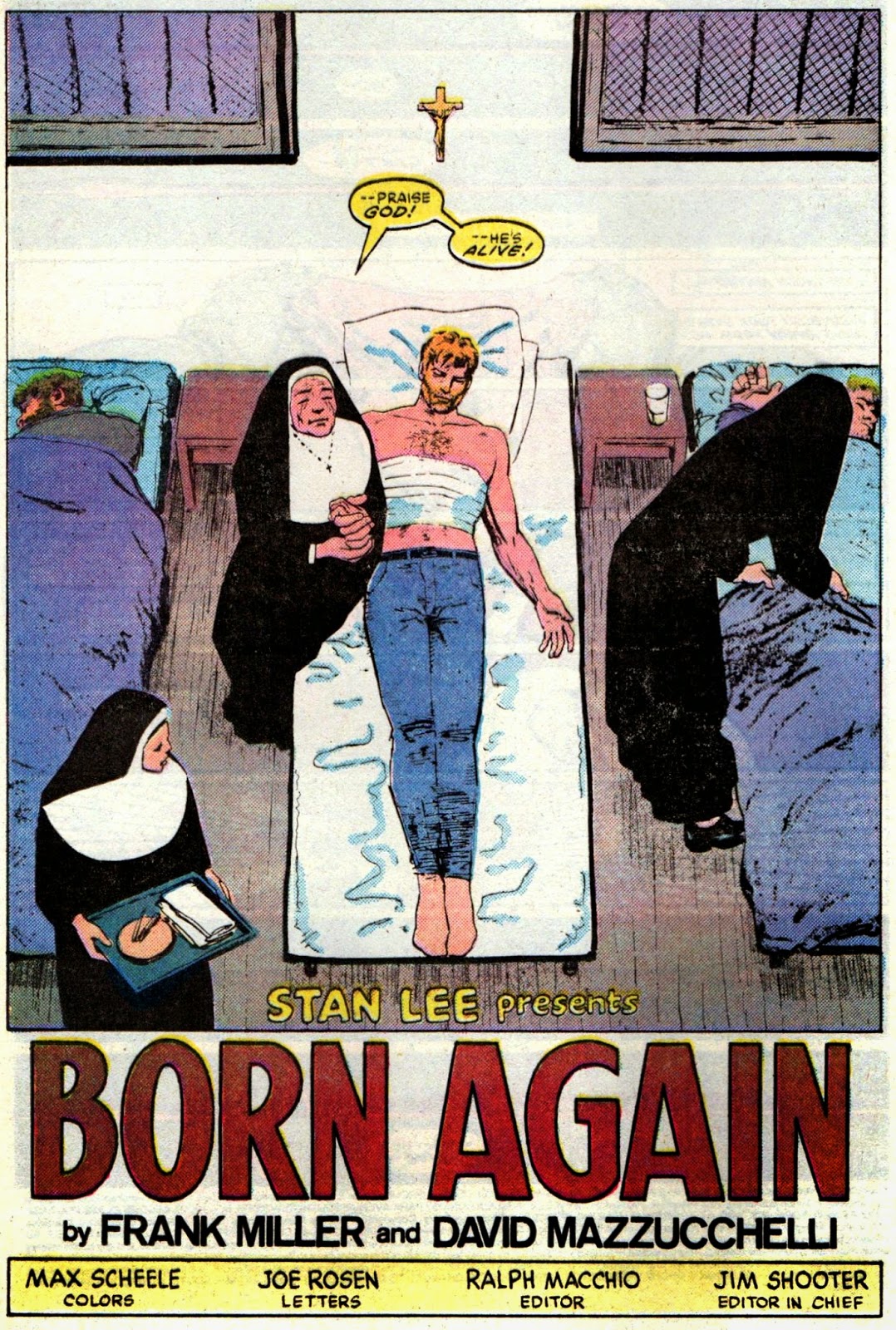 Excellent series. I had stopped reading comics soon after Miller's first run with DD, but happened to find this collection in the early 90's and picked it up. I was glad I did.

What a great time it was back then - what with Miller's own work on Batman and Daredevil, followed by his collaboration with Mazzuchelli on the same characters. Wonderful stuff.

I can never read the first few pages (to refresh my memory) without having to finish the entire saga - it's a cracker.

It's strange but my overarching memory of 80s superhero/mainstream (as opposed to alternative titles ) comics is largely one of a really poorly produced product (that for some reason flew of the shelves....for a short time) based on "hot" artists that really weren't that "hot" (Rob Liefield) overly muscular angry anti heroes and anatomically unbelievable women (ie way too big boobs no waist etc) and full of crazes and awful copies of good idea books like "Teenage mutant ninja Turtles" mini series (good , mostly awful), Marvels (mostly poor) New Universe titles, and a plethora of really awful independent publishers trying to ape Marvel ). HOWEVER, it is probably nearer the fact that the 80s was a golden age when you strip back all the rubbish and valiant failed attempts (Pacific comics , Star Comics, Eclipse) as there were some gems like Miller and Mazzucchellis DareDevil (DD to me has been Marvels most consistent title since the 60s) was one of the best along with Walt Simonsons run on Thor, Byrnes run on anything. Xmen Phoenix saga, and Miller (and Mazzuchellis Batman) still I cant help thinking of Secret Wars, the rape of Ms Marvel (way too much) gawdy "plastic plate" coloured publishing, and the start of commercially available " sexy" animal stories (ie Critters etc) ,,, ( I havent even mentioned "Watchman" :)

I bought Secret Wars (and its sequel), but I remember thinking at the time how anaemic it was - yet it shifted tons of comics. And that much touted 'dayglo' printing was awful. Even Watchmen was just okay, I thought, nothing brilliant. What I liked at the time was FF, Thor, Alpha Flight, X-Factor, Daredevil, Marvel Tales, and a few others, like Byrne's Superman, and the Batman titles. Yes, isn't it amazing, McScotty, just how much dross there was as well.

I think I used to have those Batman and Robin figures as a kid were the "Cherilea" figures (no offence) kinda cheap (but cool) plastic casts and were on a bat log base? IF so seen those for BIG money recently hope you got them at good price

Only got the Batman figure, McScotty (which I've still to receive), but I got it for an extremely reasonable price. I've put up a post about it.

Born Again is one of the best things I have ever read, no doubt. One of Marvel's greatest achievements, and Miller and Mazzucchelli at their very best.

And, I'm going to re-read it once again after seeing those gorgeous splash pages!

I almost feel like reading it again myself, DD - it certainly is a belter.