"MENACE AT 1000 DEGREES!" PART THIRTY OF FAVOURITE COMICS OF THE PAST...

'Twas a sunny afternoon in 1972, perhaps in July (in which case, it could've been during the school holidays), that I bought the above comic in one of my local R.S. McCOLL's.  I'd already read the start, finish, and several in-between issues of the KRYPTONITE NEVERMORE/SAND BEING saga a few months before, but not this one.  Comics distribution in the U.K. was hardly an exact science back then, resulting in them not always being sold in sequence or even in the year of issue.

The way I remember it now, all these years later, I'd gone into the NORFOLK RESTAURANT (just along from the newsagent's) to blag a seat and read my comic, but a guy at the next table with his wife and daughter, upon hearing that the upstairs bar had just opened, asked me if I wanted his cup of COKE, which he hadn't yet touched.  Never one to look a gift horse in the mouth, I gratefully accepted his kind offer, as he deserted his family and headed upstairs in the direction of a cool pint.

I'd finished my drink and was still perusing my comic, when a girl in my class at school sat down in front of me and declared "Oh, Superman!" (the comic, not me) and looked for all the world as if she was going to lift it from the table and pore through it.  I was having none of it, so I lifted the issue post haste and made a swift exit.  Besides, this girl had never spoken to me before, so, aside from me being devastatingly attractive to the opposite sex (he said, with a straight face), I couldn't quite figure her sudden familiarity.

Now, here's where things suddenly become a little fuzzy.  I definitely associate the cover with the above events, but, equally, also the contents from the previous issue.  How can this be?  I assume I bought #237 & 238 not too far apart, and must've repaired to the Norfolk on each occasion, resulting in both sets of similar memories becoming entwined in my mind.  I was a creature of habit and frequented the Norfolk Restaurant (which was really only a cafeteria) regularly, so it seems the most likely explanation.

However, none of that need concern you.  Your pleasant  task is merely to appreciate the stunning SWANDERSON art and lose yourself in your own recollections of this classic issue.  If only comics were as good as this today, eh? 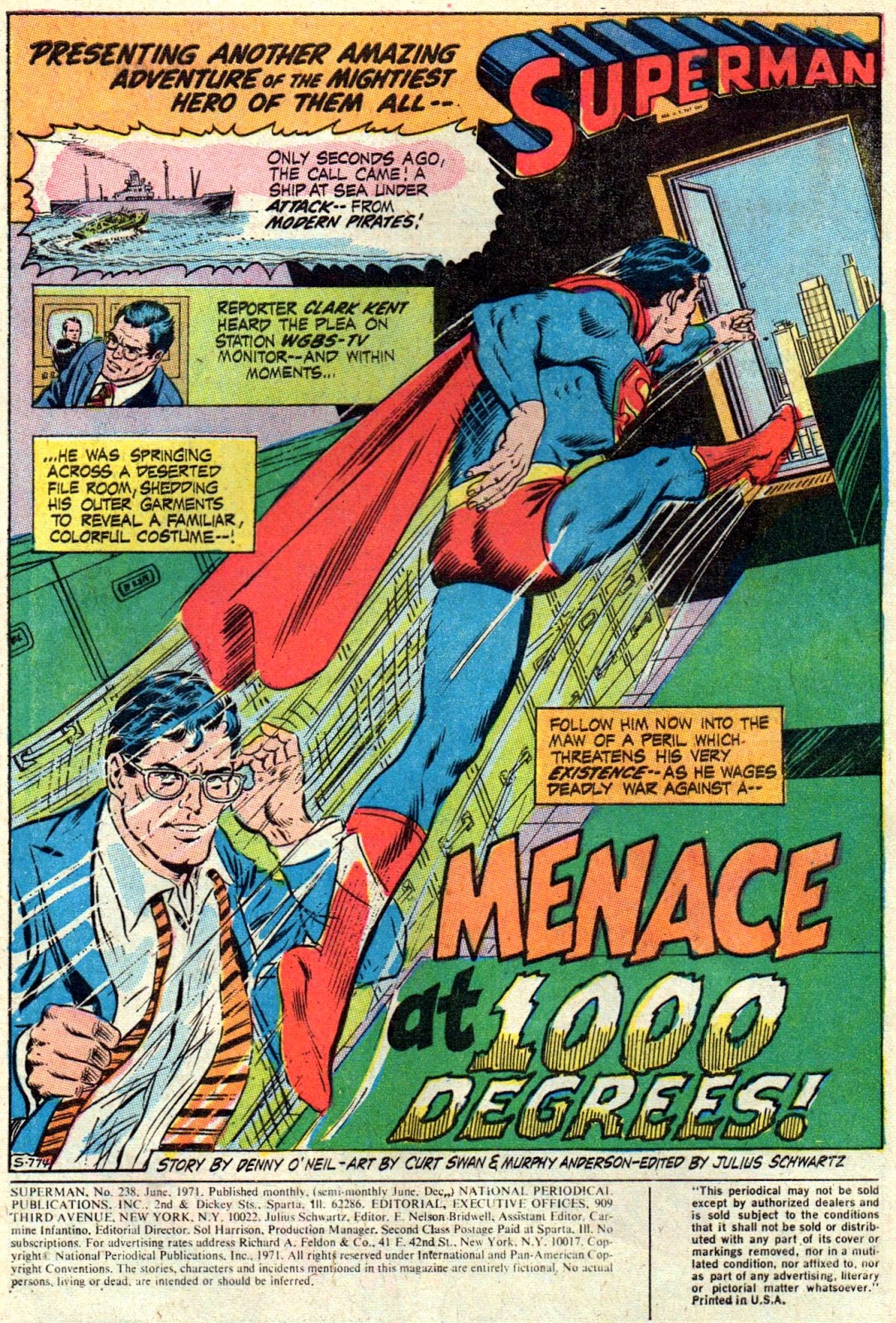 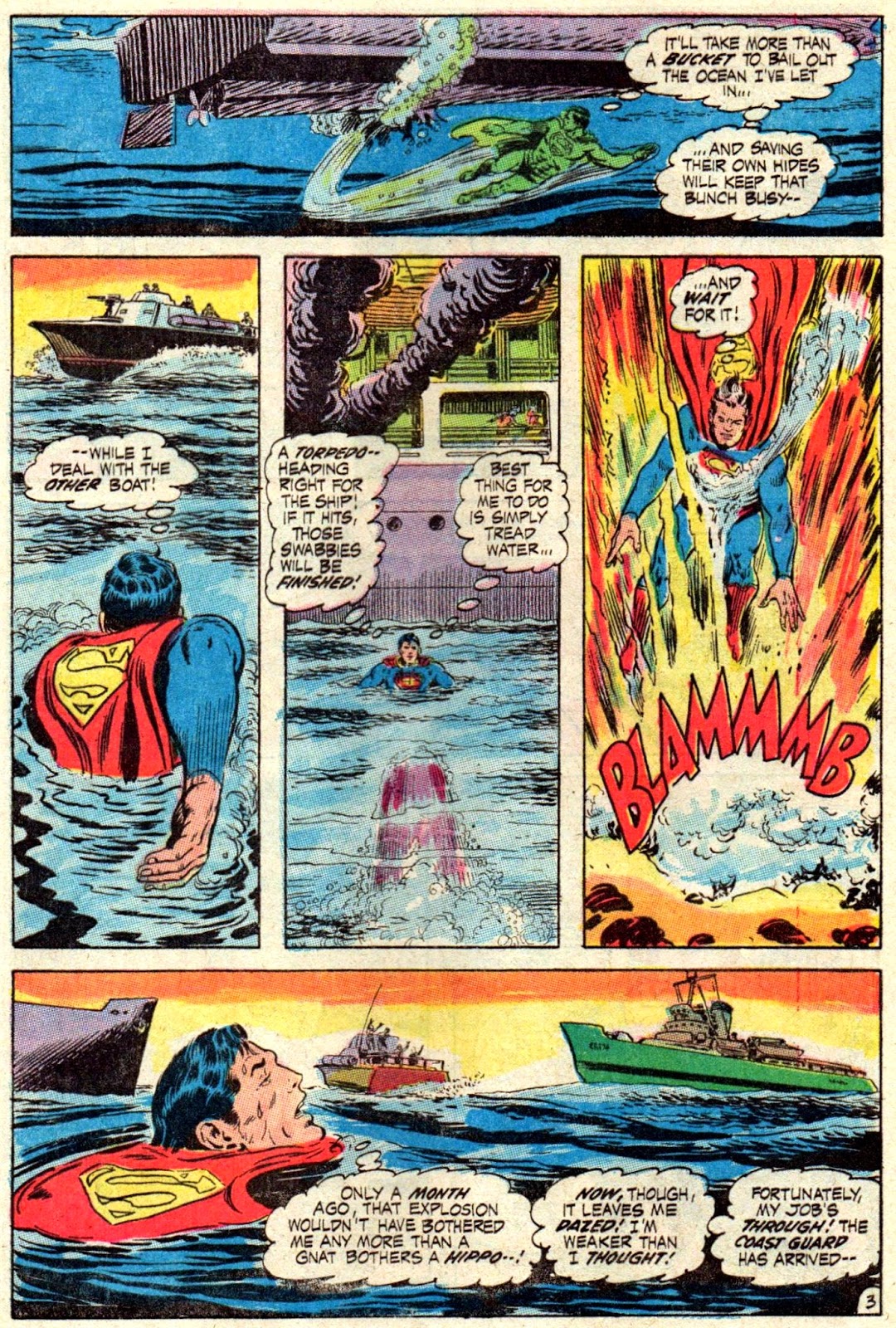 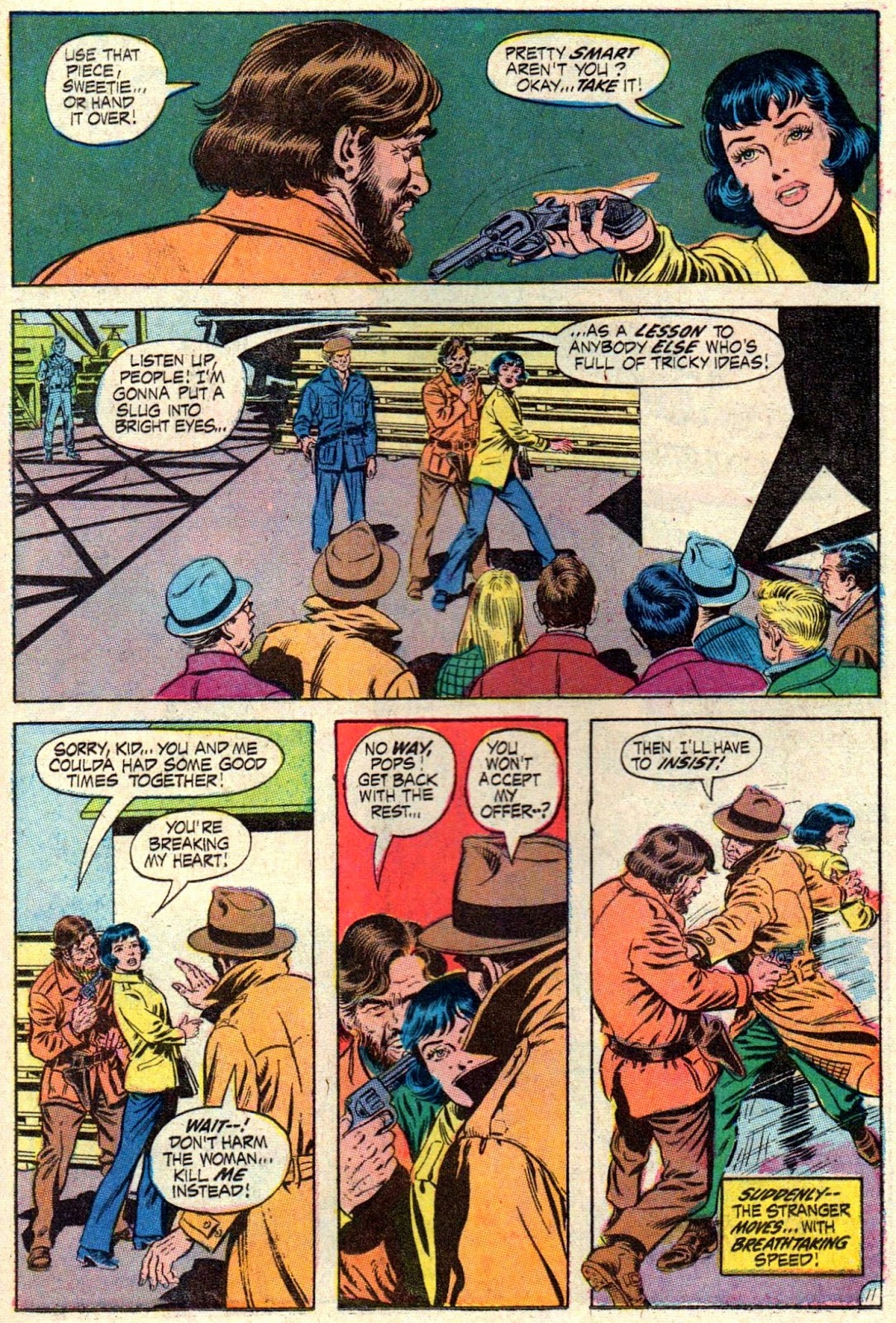 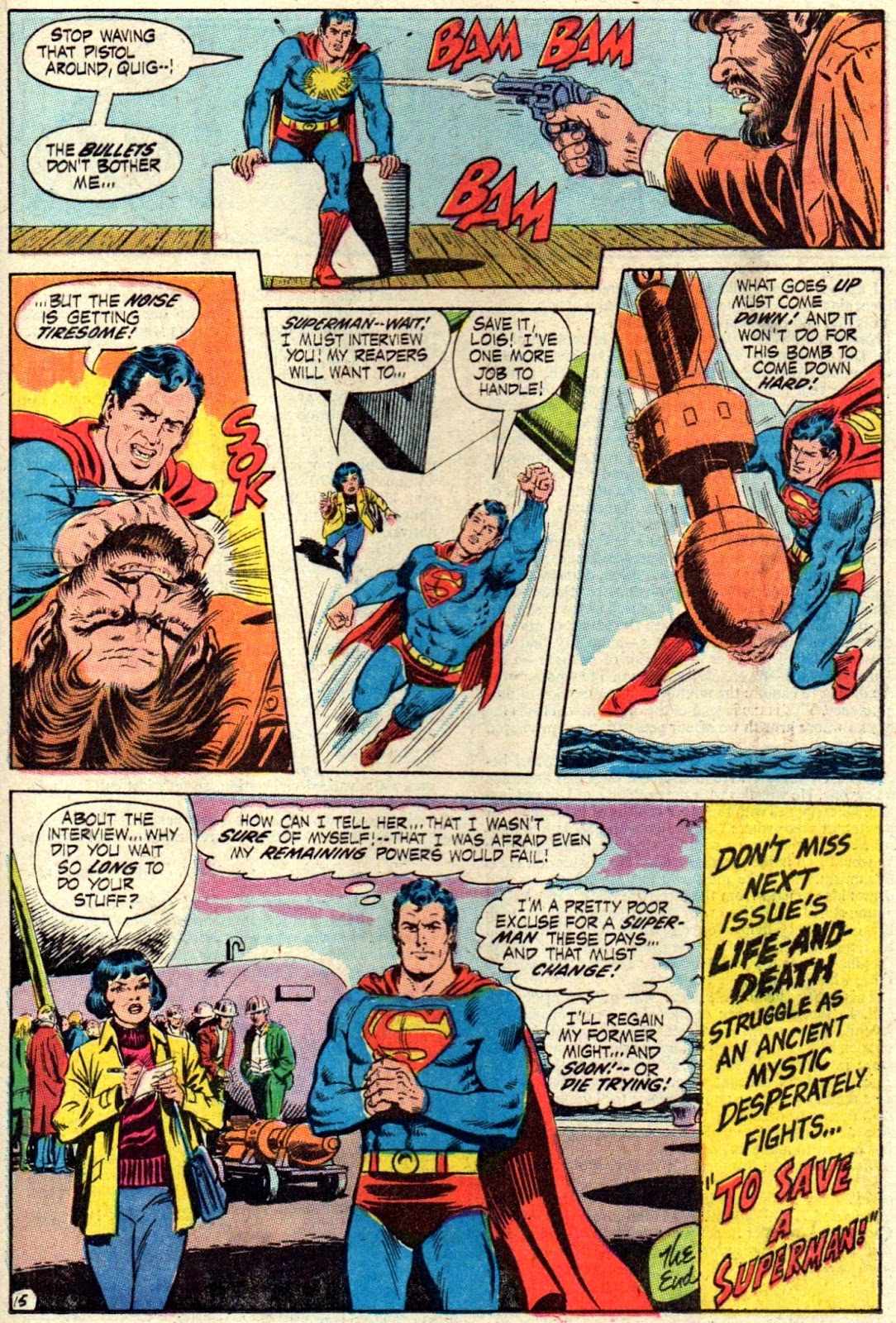 Those were the days my friend, we thought they'd never end...

Mary Hopkins. That's been one of my favourite songs since it first came out in the '60s, Thom. Sadly, the 'end of days' seems much closer than it once did.

Speaking of songs, I've got Laurie Anderson's 'O Superman' stuck in my head since reading that post!

Feeling dreadful to be honest, DD, but thanks for your good wishes. I can't abandon my fellow Criv-ites, so I had to do at least one proper post today.

Sigh that comic brought back good memories of one of my favourite family holidays - If I recall correctly this series of stories (the Sandman Saga) started with the issue that featured that amazing Adams cover where Superman breaks out of chains (a cover often copied, but never bettered). I was also on holiday (in Pitlochry , Perthshire) in a caravan when I read this comic (although I think I read this issue in 1972 as you know US comics came out late and stayed on the racks for ages in the UK) at the time I wasn't that happy being on a caravan site in Perthshire as it was really small and there didn't seem a lot to do, that was until I found a small local newsagent that sold loads of US comics and I vividly remember seeing this comic in a spinner rack along with a few others (including a DC Special 100 or 80 pager featuring Aquaman reprints and a couple of Batman and Teen Titans comics) and just lost myself in that comic book world and all that amazing Swan Anderson art (and amazing Adams covers).

As it turned out that ended up a really good holiday, the weather was amazing , I had a regular supply of quality US comics, a 70s feather hair cut and a fashion sense that made me think that 30 inch green flared trousers were cool. We had also only bought or family dog the year before so this was her first holiday and we had a great time, plus it was one of those holiday where all the family just had a good laugh as it turned out there was local castle that held family ceilidhs, had great walks etc. More importantly that was the year I embarked on my life as an " international lover" as I met a girl from exotic Wales, we both couldn't understand a word each other said but how could any young lady resist my polyester blend flares and terry cotton tank top -life was good when we were 12 years old (I wonder how much it costs to travel to Wales>!).

Great reminiscence, McScotty. Glad to know my humble blog can bring back happy memories for you. The Norfolk Restaurant is now a pub (and has been from the mid or late '70s) - and what used to be an open air shopping centre is now a roofed-over complex. However, whenever I look at the comics I bought back then, the clock rolls back and, in my mind's eye, things are once again as they used to be.

Talking of "Those Were The Days" - when my sister first heard that song she thought the line "once upon a time there was a tavern" was "once upon a time there was a pervert" (!!!!) - it's always been one of my favorites too although I'm not sure about the line "oh my friend we're older but no wiser" as I definitely feel wiser or perhaps I'm just more cynical and wary rather than being optimistic and naive as I used to be.

I must confess that I don't hear the slightest similarity between the two words, CJ. Although, when the Beatles sang "All We Are Saying Is, Give Peace A Chance" - I thought they were singing Billy the Cat. As for getting older, our sight deteriorates so that we can't see our wrinkles in the mirror, our hearing goes so that we don't hear kids calling us names in the street, and we start thinking we're wiser so that we don't notice all the stupid things we say or do. Isn't Nature kind?

"All we are saying is Billy the Cat" - I love it !! By the way, Kid, it was John Lennon who sang "Give Peace a Chance", not the Beatles but I'll forgive you as your memory is going due to old age and you are currently under the weather too. As for mis-heard lyrics: in Louis Armstrong's "Wonderful World" I thought for years that the line "and the dark sacred night" was "and the dogs say goodnight". And in Billy Ocean's "Red Light Spells Danger" I heard the line "another danger sign is on" as "another day in the china zone" !!

Believe it or not, CJ, I actually looked it up to see whether it was a Lennon or Beatles song just to be sure before I attributed it to them and it's listed as both, so I just went with the group. There's another line in Diamonds Are Forever which was never quite clear to me, but I eventually worked it out. Can't remember what it is at the moment, due to the reasons you kindly supplied.

Well, if its misheard lyrics with a sci-fi connection you want, I'm your man!

I seem to have forgotten most of the songs which I misheard the lyrics of, DD. I'd have to hear them again to be reminded of them. As for Robert Plant - hey, you never know, despite the lyrics not being what you thought they were.

Hi, JP - a bit better, but not by much, alas. Still got a bit of a temperature. Thanks for asking. And you know what they say - better late than never.

It's amazing how some songs can become so popular when people don't even understand what's being sung, eh?

When I was about 15 my friend Jason said that I cared too much about the words of songs - well, doesn't everybody care about the words, I thought. Maybe lots of people just listen to the tunes and the lyrics don't matter.

Strangely, that must be the case, CJ.