THE MARTIAN HAS LANDED...

MY FAVOURITE MARTIAN was a TV show that lasted for three series (or seasons, as our U.S. readers refer to them) between 1963-'66 on American TV.  It must also have aired in Britain to be one of the strips in TV CENTURY 21, but Scotland seems to have missed out in that regard.  Not only have I never seen an episode, I don't know anyone in my neck of the woods who's seen one either.

The TV show (starring RAY WALSTON and BILL BIXBY) may have been inspired by the 1960 JERRY LEWIS movie VISIT To A SMALL PLANET, which had a similar premise, but it seems to have been specifically created to cash in on the popularity of sitcoms featuring characters with extraordinary abilities. (BEWITCHED and I DREAM Of JEANNIE spring to mind.)

Oddly, even though I've never seen the show, My Favourite Martian (and particularly Ray Walston's image) remains one of the fondly-recalled memories of my childhood, due primarily to the strip's presence in probably Britain's premier periodical of the time.  BILL TITCOMBE drew most of the strips, I believe, and demonstrated the skill and versatility for which he is justly renowned. 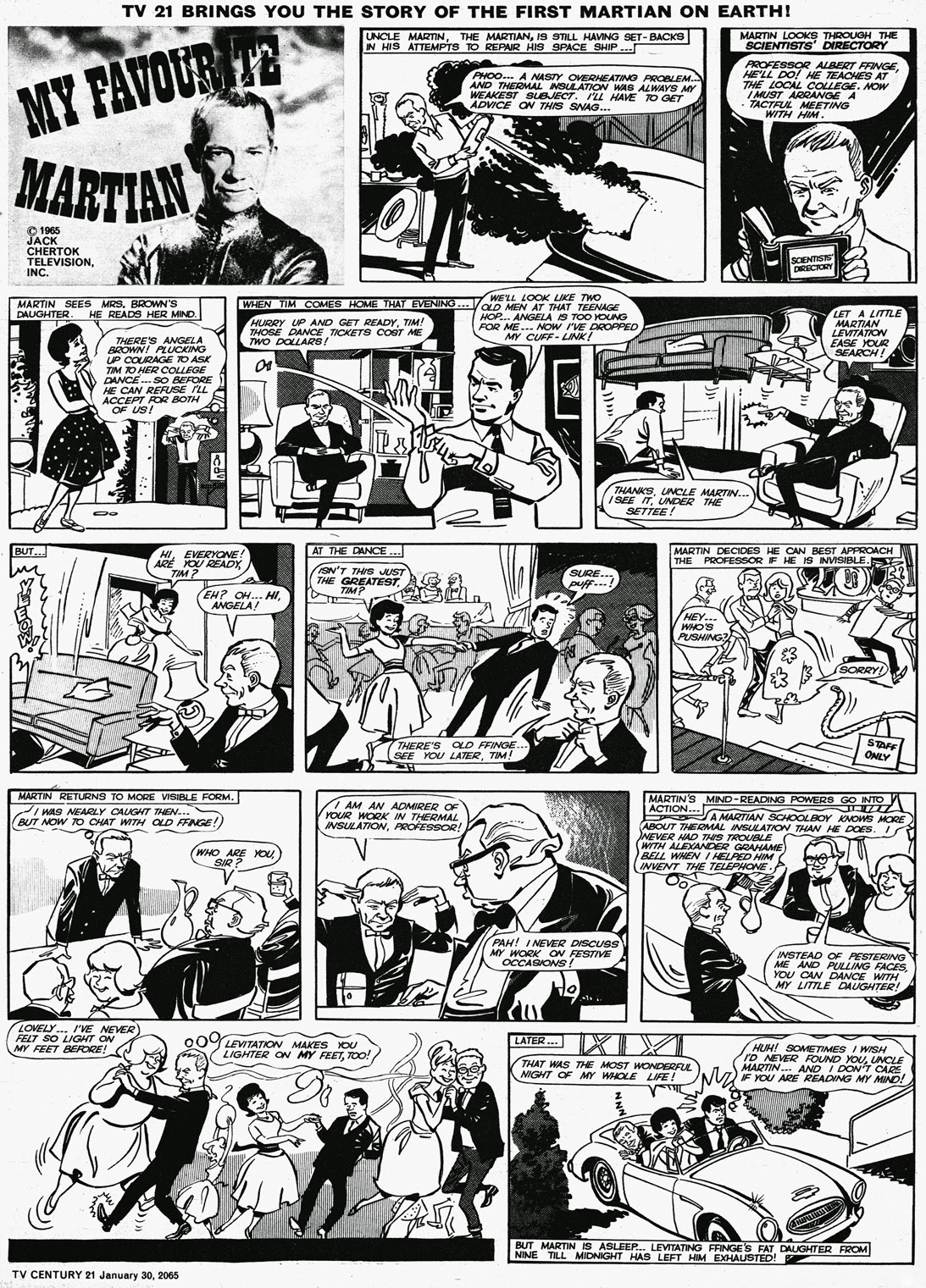 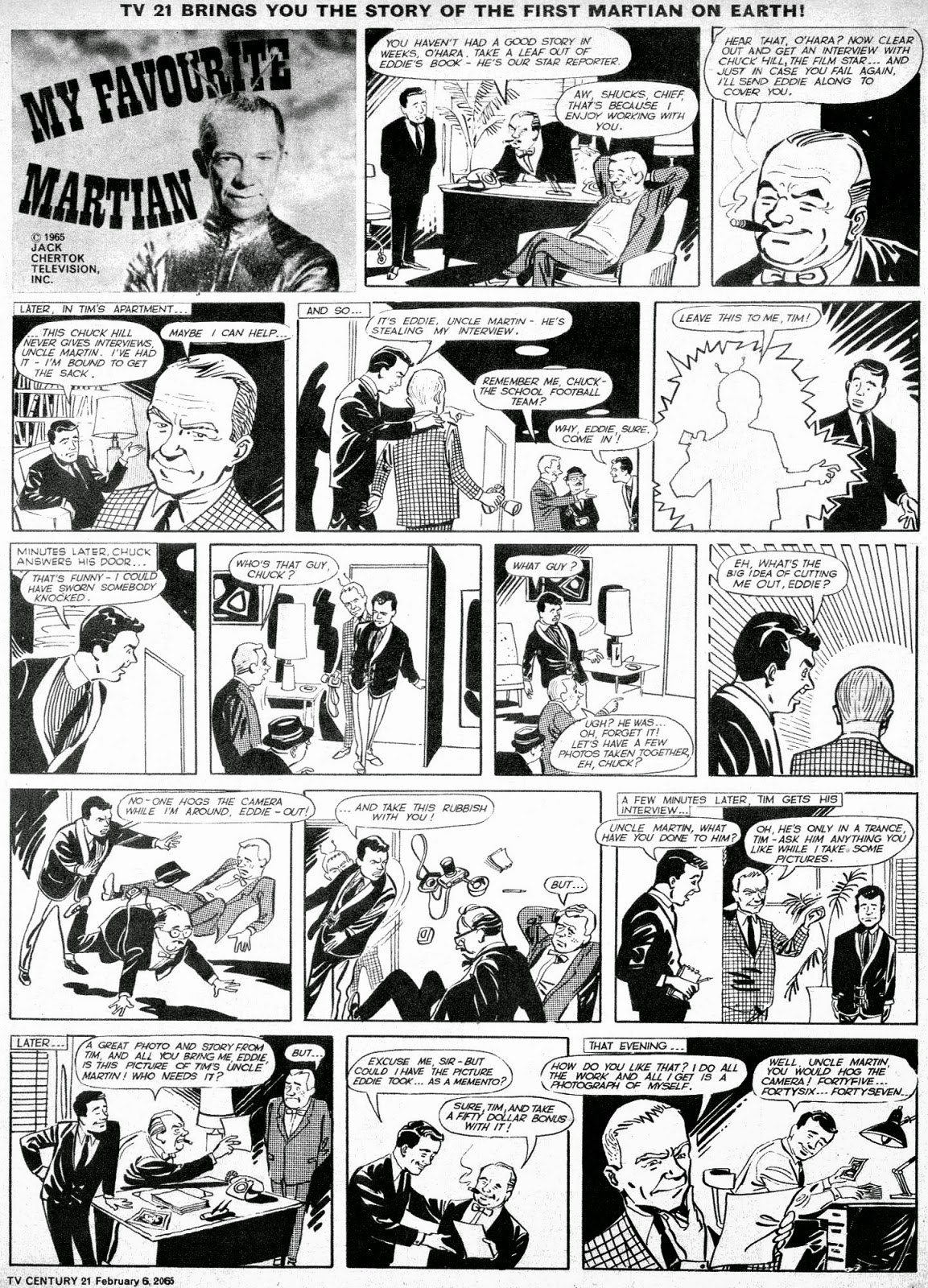 Never saw the programme in the Midlands either. Has ANYONE in the UK seen it?
ANY pages from TV 21 are a hit with me. Even Zero X!!!!

I believe it was shown in England - wouldn't have been much point in putting it in TV21 otherwise.

You missed out on the Planet of the Apes TV show as well - apparently STV was the only ITV region that didn't show it preferring Sale of the Century instead. I've just been reading mountains of online articles about the referendum both for and against so it's nice to see some geek stuff again !! By the way October 13th will be the 40th anniversary of the POTA TV show's UK debut and October 19th is 40 years since No.1 of the Marvel weekly.

From what I've read and heard about the POTA TV show, I think Sale of the Century was a wise choice on STV's part, CJ. I liked the first two movies - the final three were pushing things too far.

Kid, I'd agree with you about the POTA movies but I was a massive fan of the TV show - I'd never heard of POTA until the TV show started and when I saw the Marvel comic on sale (No.5) I just assumed it was all about the TV show. Of course it wasn't but I was instantly hooked on the comic and that was my gateway into Marvel comics which I hadn't been aware of till then so if it wasn't for the POTA TV show I may never have discovered Marvel. It's quite strange to think that you were reading the comic without being aware of the TV show because for me (and plenty of others I'm sure) the two things were so linked - after all they had both started just six days apart.

I remember this show vividly! I really enjoyed it, although I was very young at the time. Judging by the friends I remember discussing it with, I would guess I was between 6 and 8 years old at the time (in other words, between 1964-66). Probably the earlier end, because it was the first time I had ever encountered either the word "Martian" or the name "Martin", which I got mixed up for a long time!

According to Roger Fulton's Encyclopedia of TV Science Fiction (1990 edition), at least 67 episodes of My Favorite Martian aired in various regions of the UK between November 1963 and May 1968. I lived near Birmingham at the time, so it would have been the ATV region.

Thing is, CJ, I would've been aware of the TV show the instant it was mentioned in the comic, even 'though I never got to see it. Another programme I don't think we got in Scotland was Gerry Anderson's Secret Service.

I remember Bewitched and I Dream of Jeannie, AM, but, alas, never saw My Favourite Martian. I believe the show is now available on DVD, so who knows? I may get to see it one day after all. There was also a cartoon series in the early '70s, but the original cast didn't do the voices.

Kid, I phrased that wrong - the POTA TV show was often mentioned in the comic so obviously you were "aware" of it. I suppose it's just strange to me that you've never seen a show that is (for me) iconic - and STV were wrong, so there !!! Anyway, I was bitterly disappointed when it was cancelled after 14 episodes. What's really amazing 'though is that ITV were broadcasting an imported sci-fi show about talking apes at peak time on Sunday nights - that would be utterly unthinkable now. The TV schedulers were much more bold and open-minded in those days !!

I definitely saw My Favorite Martian back in the sixties. I lived in the Grampian TV area, so possibly they bought it in and STV didn't

Planet of the Apes TV show or the mighty Nicholas Parsons in Sale of the Century? Nah, Nicholas for me any time, CJ. So the TV show only lasted 14 episodes, eh? The comic lasted longer. I don't think TV schedulers are any less bold and open-minded these days - it's just that there are so many other channels which probably show all types of programmes on a Sunday.

That's possible, D. Anyone else in Scotland ever see the show back in the '60s?