PUTTING THE CHEF IN THE PICTURE... 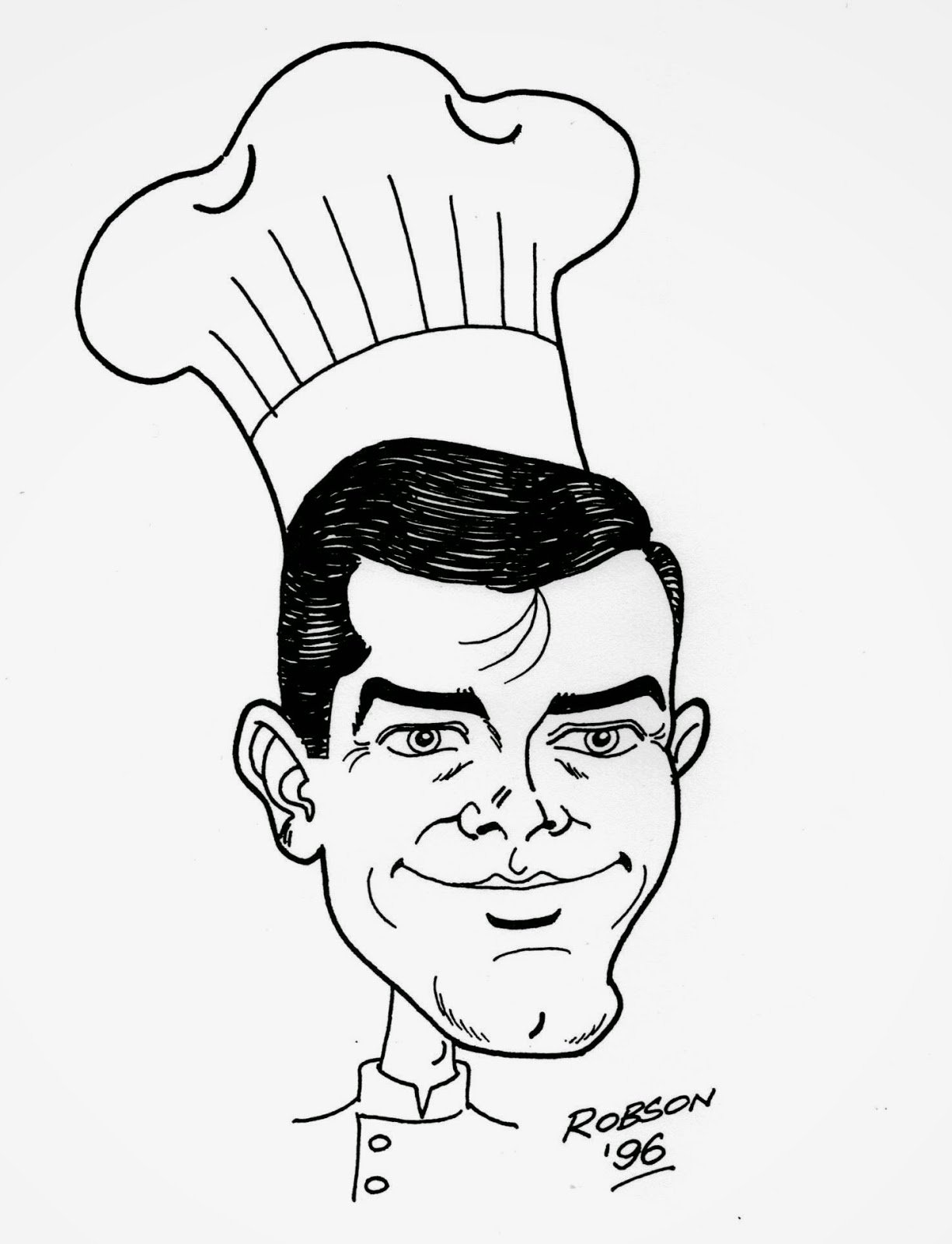 Back when I was a full-time professional comics contributor,
I dined out every evening at various local eateries.  In one of those
establishments, the head chef was an English chappie named STEVE,
and one night he asked me if Id do a caricature of him that he could give
as a present to his mother whom he was shortly due to visit in his home
town.  If I recall correctly after all these years, he sat at my table while I
drew a preliminary pencil pic, which I then took home, copied onto an
A4 sheet then inked and also coloured.  (But not before I'd made
a photocopy of the black and white original.)

I saw him on his return and he told me his mother was extremely
pleased with the pic, but he then said something which quite startled
me.  Apparently, his two young nephews had visited his mother during
his stay and recognised my name.  He confirmed to them when asked
that I was indeed the very Robson who contributed to 2000 A.D.,
which happened to be their favourite weekly comic, and they were
well-impressed that one of THARG's droids ate in the actual
restaurant in which their uncle worked.

Even 'though I was merely bathing in the reflected glory of 'the
galaxy's greatest comic', I was fair chuffed that two strangers who
lived hundreds of miles away even knew who I was - and I was even
more pleased when Steve told me that they had asked him to inform
me that I was their favourite lettering artist.  Anyway, I didn't charge
Stevie-boy for his caricature, but I got a couple of free meals out
of it as a 'thank you' for my efforts.

I loved drawing as a kid and my dad gave me a plywood board to use as a drawing board which I've still got although these days I lay it on the bed to use as an ironing board. He also got me huge rolls of paper to draw on and I'd lay on the floor copying the artwork from my Marvel comics. My father's been dead for nearly fifteen years and that simple plywood board is a reminder of him and those times spent drawing. These days I don't draw at all apart from the odd doodle.

I don't really draw much at all these days, CJ - my heart just ain't in it. Even a doodle is a stretch for me, because I always get bored halfway through and feel like stopping. (And I often do.)

Kid, we know that - you never finished that doodle from a few weeks ago so we never found out what it was ! You probably don't remember it now.

"Do pay attention, 007!" The completed doodle was put up weeks ago, Col.

I'm baffled how I could have missed that as I read this blog every day ! My apologies, Kid - I'll have to go back and look for it.

It's bedtime with no supper for you, m'lad.