DRAWING A TEDDY BEAR? IT'S A PICNIC... 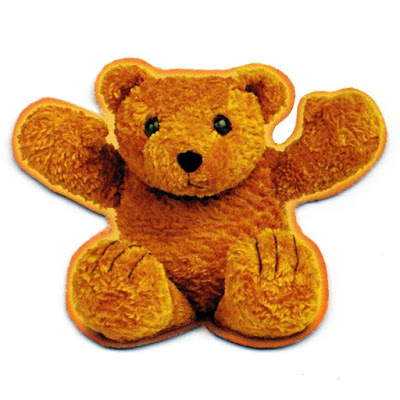 The first thing I remember ever drawing was a teddy bear.  It was a photo of a 'special offer' teddy on the back of a packet of KELLOGG'S CORN FLAKES, back in 1964.  I carefully cut out the teddy and smuggled him into school one day in my satchel.  I was 15 at the time - - and, yes, you're right, I'm pulling your leg about my age.  Just checking to see if you're paying attention.

Actually, I was only 5, which some people may consider as still too old to be interested in teddies, but this was 50 years ago remember, when kids were kids and not the chain-smoking, binge-drinking, coke-snorting, sex-obsessed little hooligans they seem to be today.  Anyway, using the cardboard cut-out as a stencil, I drew around it and recorded the outline on a sheet of paper.  Then it occurred to me that it would be a simple enough task to supply the details within the outline, which was composed mainly of circles.

I then realised that the head, ears, body, arms and legs, likewise consisted of circles, and that I could easily draw them without recourse to the 'stencil'.  Voila!  I drew Ted quite a few times before graduating to other subjects.  After all, drawing something seemed to be a simple matter of copying shapes in front of you onto a piece of paper, which I found to be an easy enough thing to do.

So, whaddya know!  Next thing I knew, I had developed a reputation for being a 'good drawer'.  Incidentally, the ted at the top of this post is a stand-in.  The original's arms didn't extend quite so far from his body.  Still, cute little fella, eh?
Posted by Kid at Friday, March 28, 2014

Such a charming,unbiased view of today's youth there, Kid lol. I wouldn't like to have the horrible exam pressure they have now, it was bad enough when I was a teenager but it's far worse now. As for being too old for teddies - don't all these posh public school-boys have their teddies with them even when they're adults? Gyles Brandreth has a whole collection of them and David Cameron probably consults his on government policy.

'Charming and unbiased'...that's me to a 't', CJ. Actually, I'd disagree with you about it being far worse for teenagers now than in our day. Exams have been dumbed down in order for schools to get higher pass marks - and kids today get far more pocketmoney than I ever got, even allowing for inflation. The only thing we had better was the selection of weekly comics to choose from.