"EXPLODING FROM THE MIGHTY WORLD OF MARVEL..." proclaimed the cover banner of the first ish of CAPTAIN BRITAIN's monthly mag.  It said the same on the covers of #s 2-5, 7 & 8, ensuring that the name, at least, of Marvel's 1972 debut British comic survived into August of '85.  Then we had to wait another 18 years to see the mag's return.  Ironically, some of these same CB tales eventually appeared (in colour) in the revived MWOM, bringing things nicely full-circle.

Cap, of course, had first appeared in his own weekly mag back in 1976, and we'll be looking at the covers from that series in (hopefully) the not too distant future.  Until that happens, be sure and join us for the second part of this particular cover gallery - coming soon! 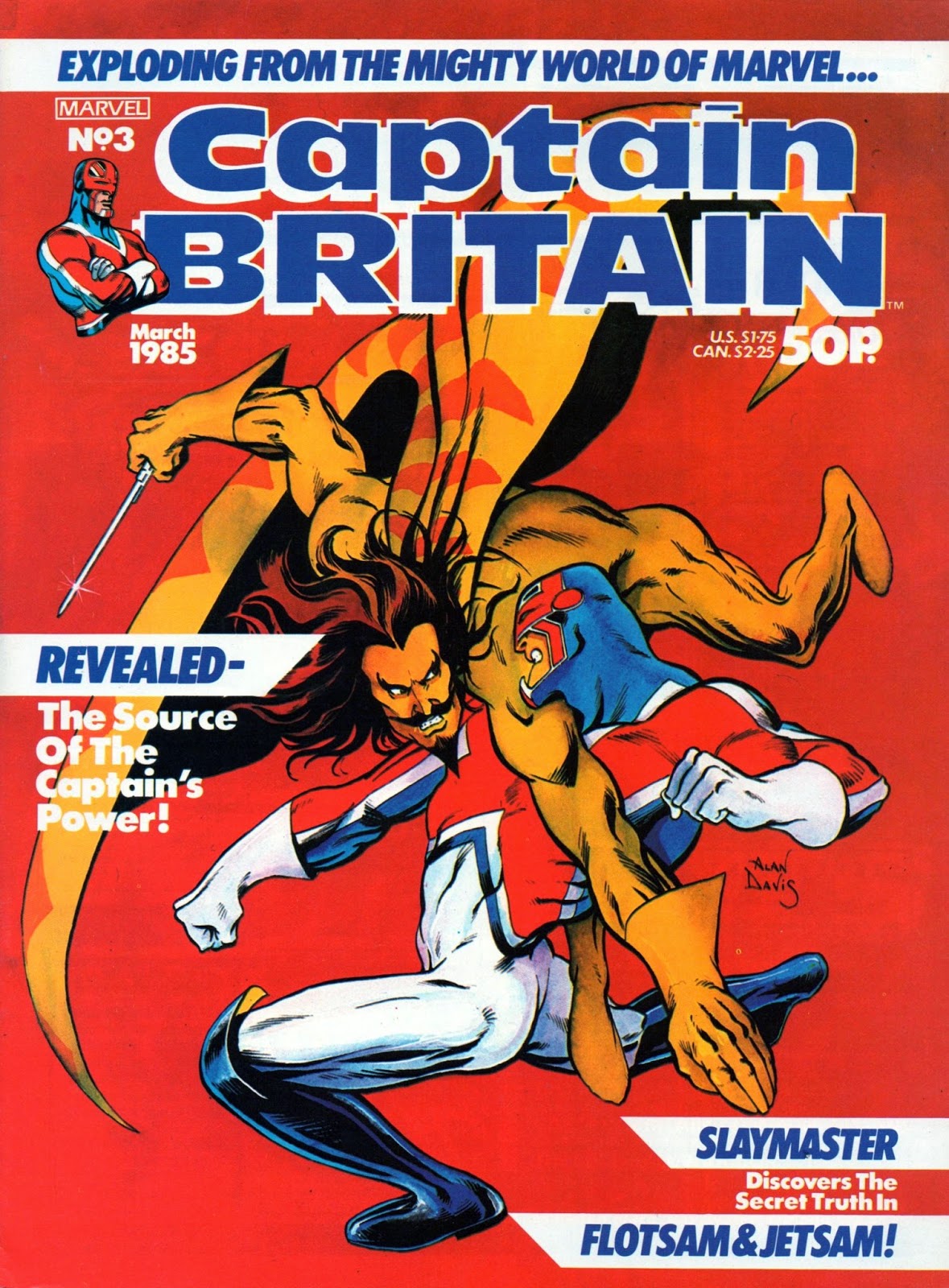 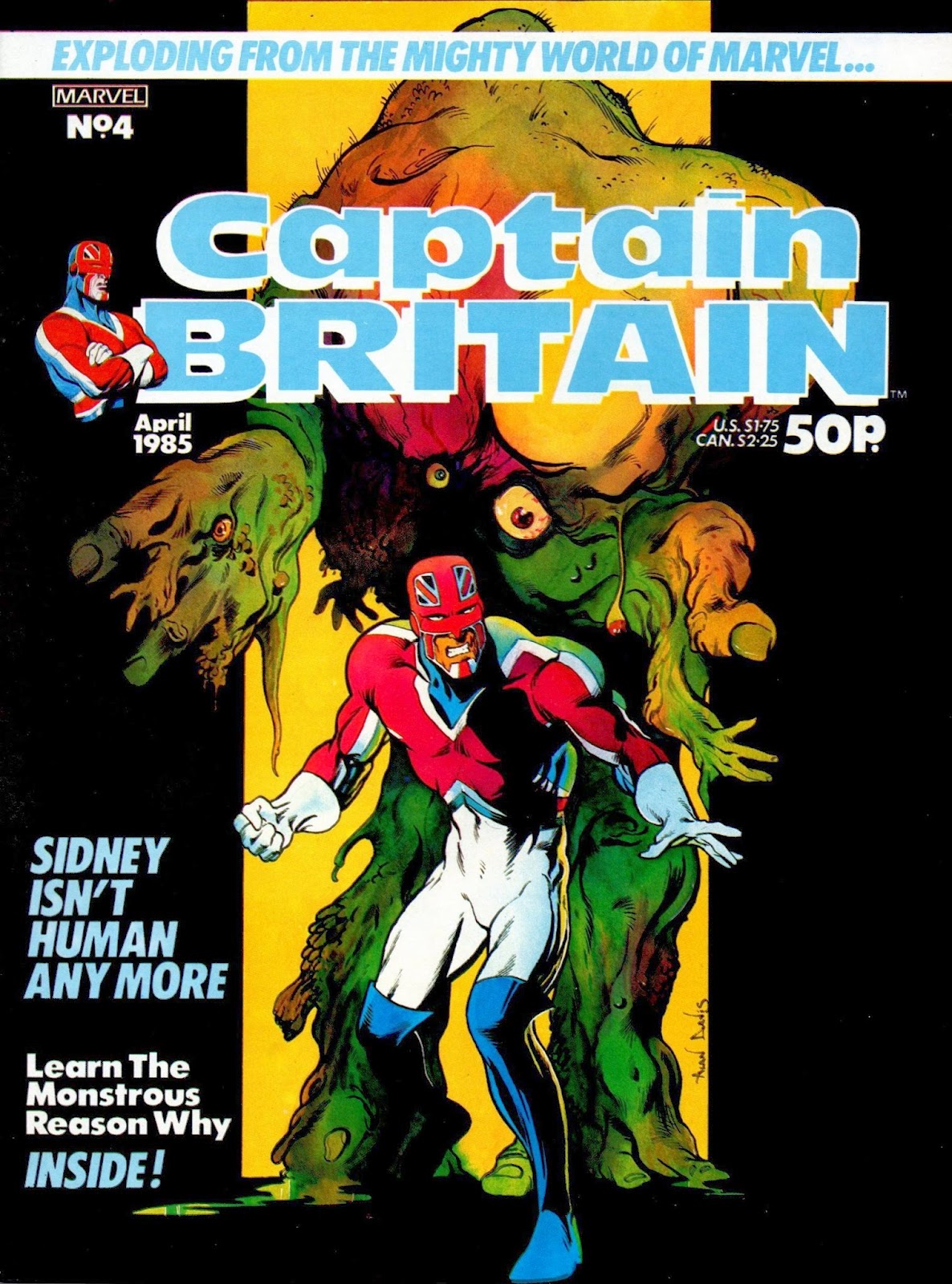 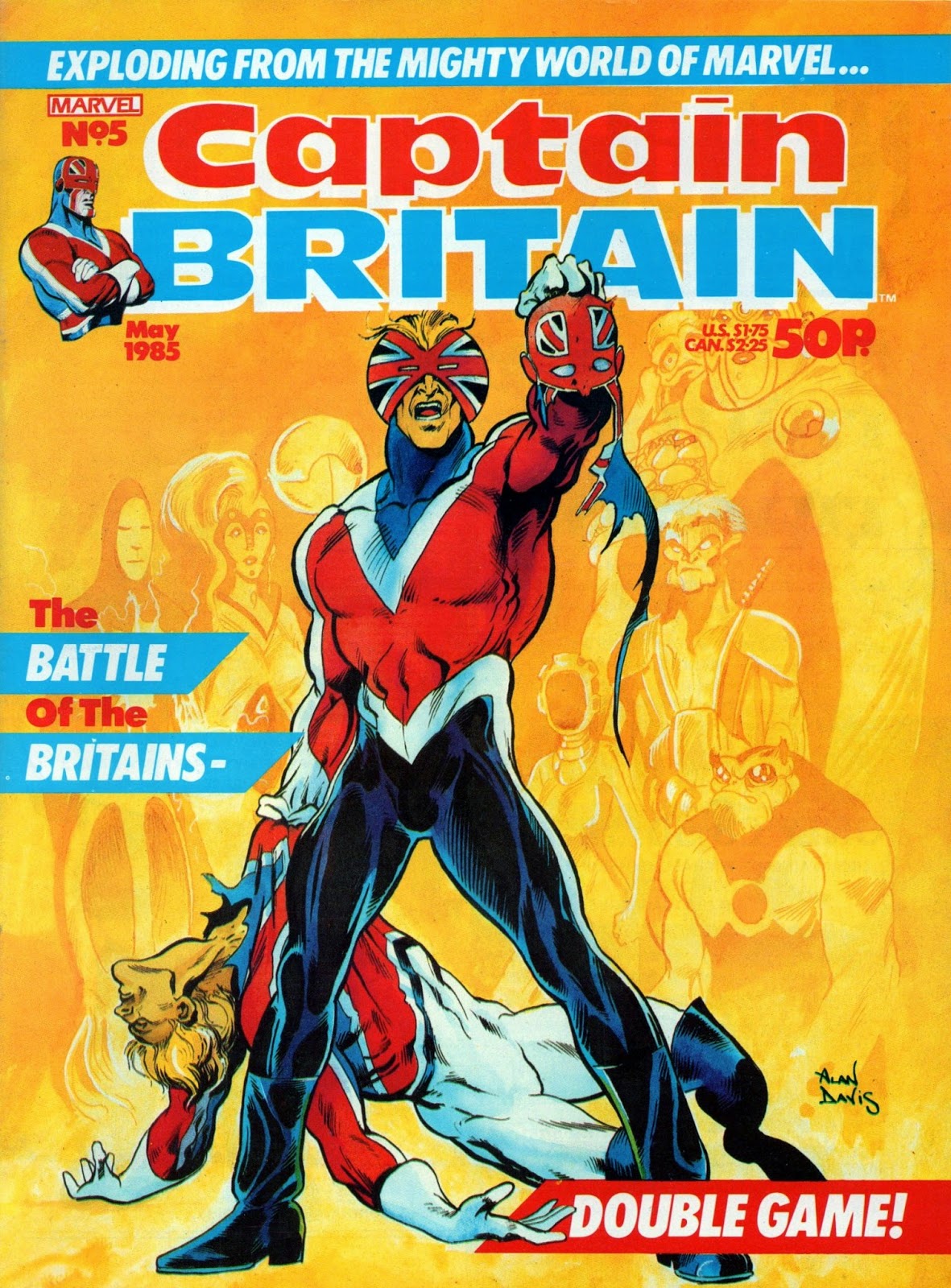 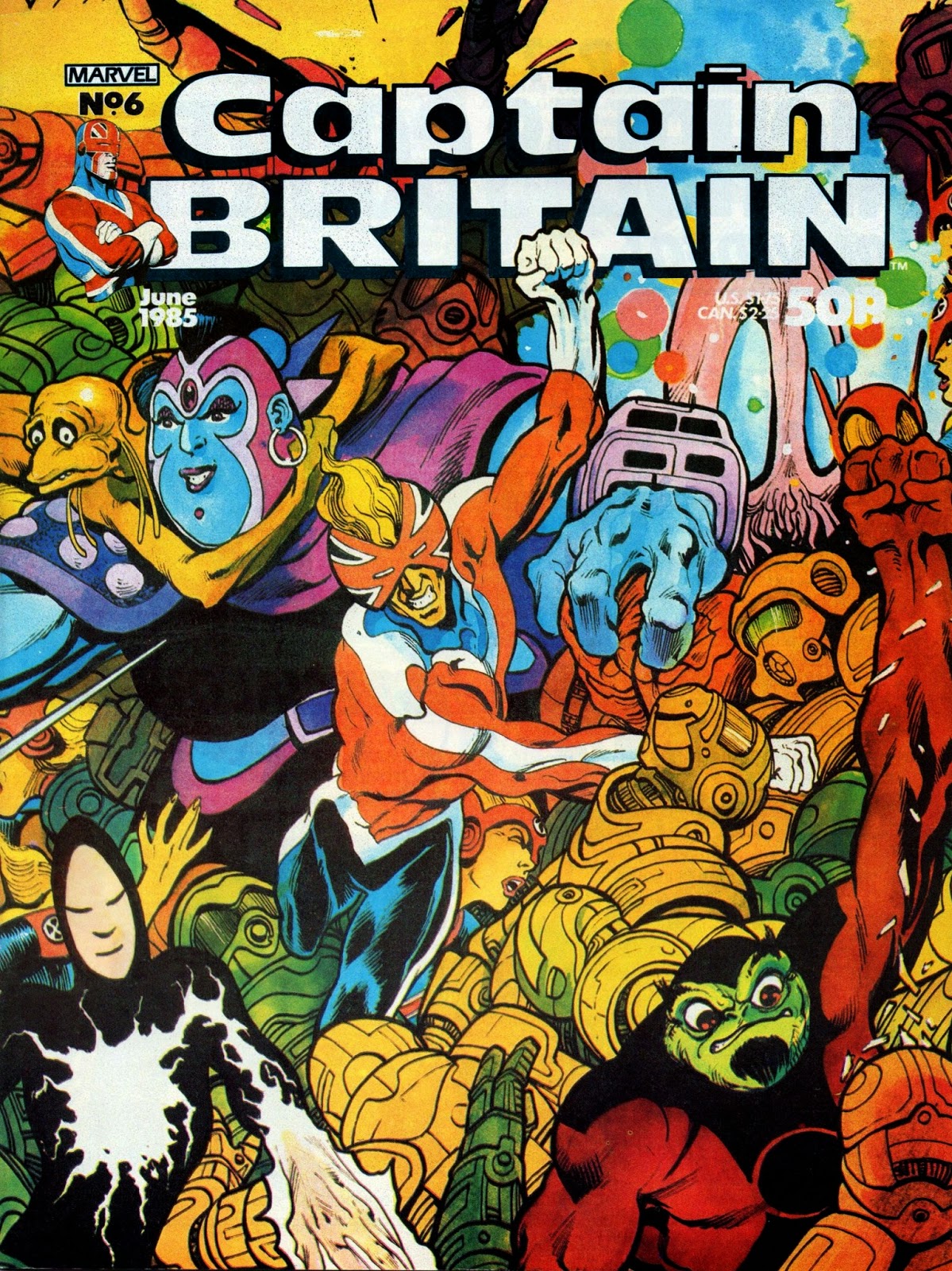 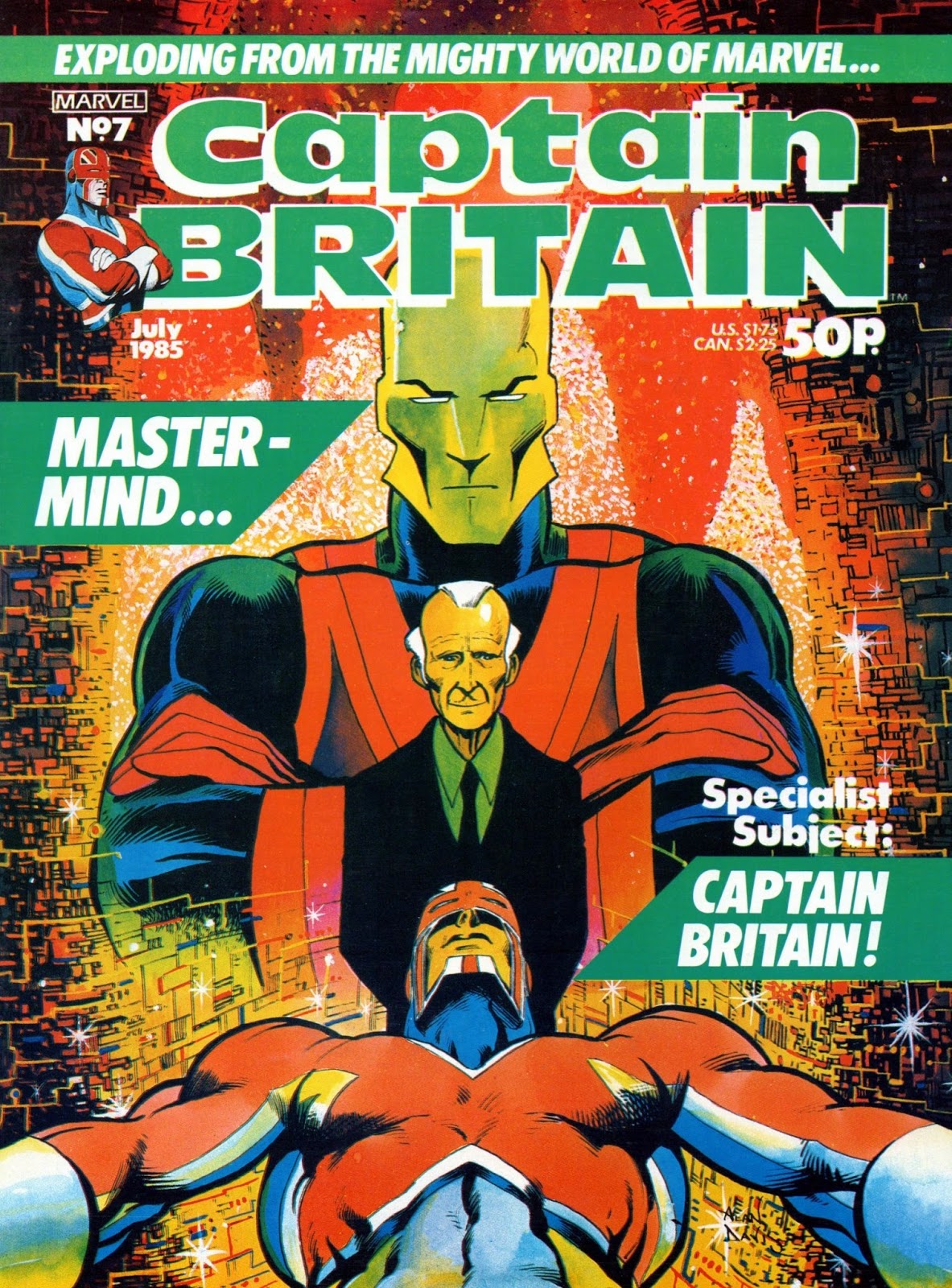 He deserved his own mag, but it's a sad point in Marvel UK's history, as it was their last REALLY great monthly for about 5 years until 1990"s Complete Spider-Man.
Anyway, loving these covers, Kid & looking forward to CBW which I missed, especially a peek inside as I gather they were colo(u)red in the States.

Worry ye not, JP, I'll give you a peek inside the CB weekly. Incidentally, somewhere on the blog is a post on CB #1 which does just that.

I never really managed to get into either version of Captain Britain for some reason although I loved Alan Davis' art - surely one of the UKs best and most underated artist.

Certainly one of the best, McScotty, but underrated? I think he's held in pretty high regard. As to Cap, I think I preferred the first version. Corny for sure, and a Spidey rip-off, but pure Marvel.

In answer to CJ's self-deleted question (wish you'd stop doing that, CJ - it b*ggers up the flow)), Cap appeared (sans costume and with amnesia) in the Black Knight strip in Hulk Comic in '79, and then (in his new costume) in The Daredevils in 1983. That was soon swallowed by MWOM, where his strip continued until his own mag hit the shelves in '84/'85. The lettering in those early 'new' Cap tales in MWOM was truly awful, until Tony Jacobs eventually (and thankfully) took over the calligraphic duties, giving the strip a more professional look.