Okay, here we are with the next instalment of the SMASH! cover gallery, to give all you comic-hungry peeps an idea of what you missed if you weren't around at the time, or refresh your memory if you were.

One thing I've noticed about Smash! is just how much reading there is in each issue. Typical of boys comics in Britain at this time, each page equalled two pages of an American comicbook.  Therefore, a three-page strip in a comic like Smash! was really a six-page strip in U.S. terms.  So, even though some of the strips were retitled reprints, the comic was exceptionally good value for money at only 7d.

The WARRIORS Of The WORLD cover feature lasted for 46 issues, before being replaced with a dramatic 'splash page' representing the exploits of SIMON TEST for the remainder of the comic's lifespan.  Looking back now, it's hard to believe it ran for only two years - it seems far longer in retrospect.  However, including the ODHAMS incarnation of the comic, it lasted for just over five years in total, making it a respectable success from the publisher's point of view.

I can guarantee you one thing:  Whatever numbers the comic was selling in when the decision was taken to cancel it, publishers today would consider half those sales figures a raging, sure-fire success. 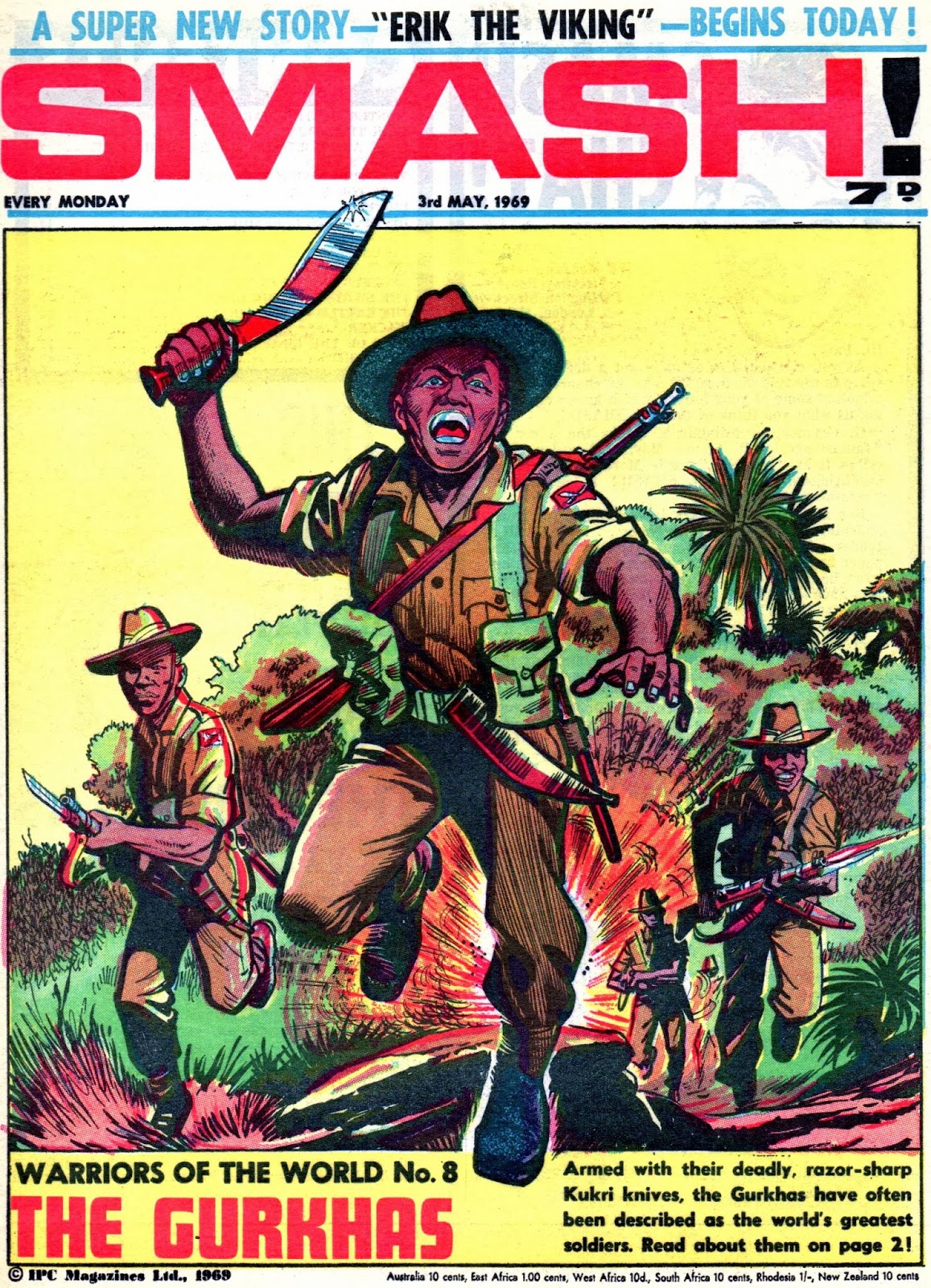 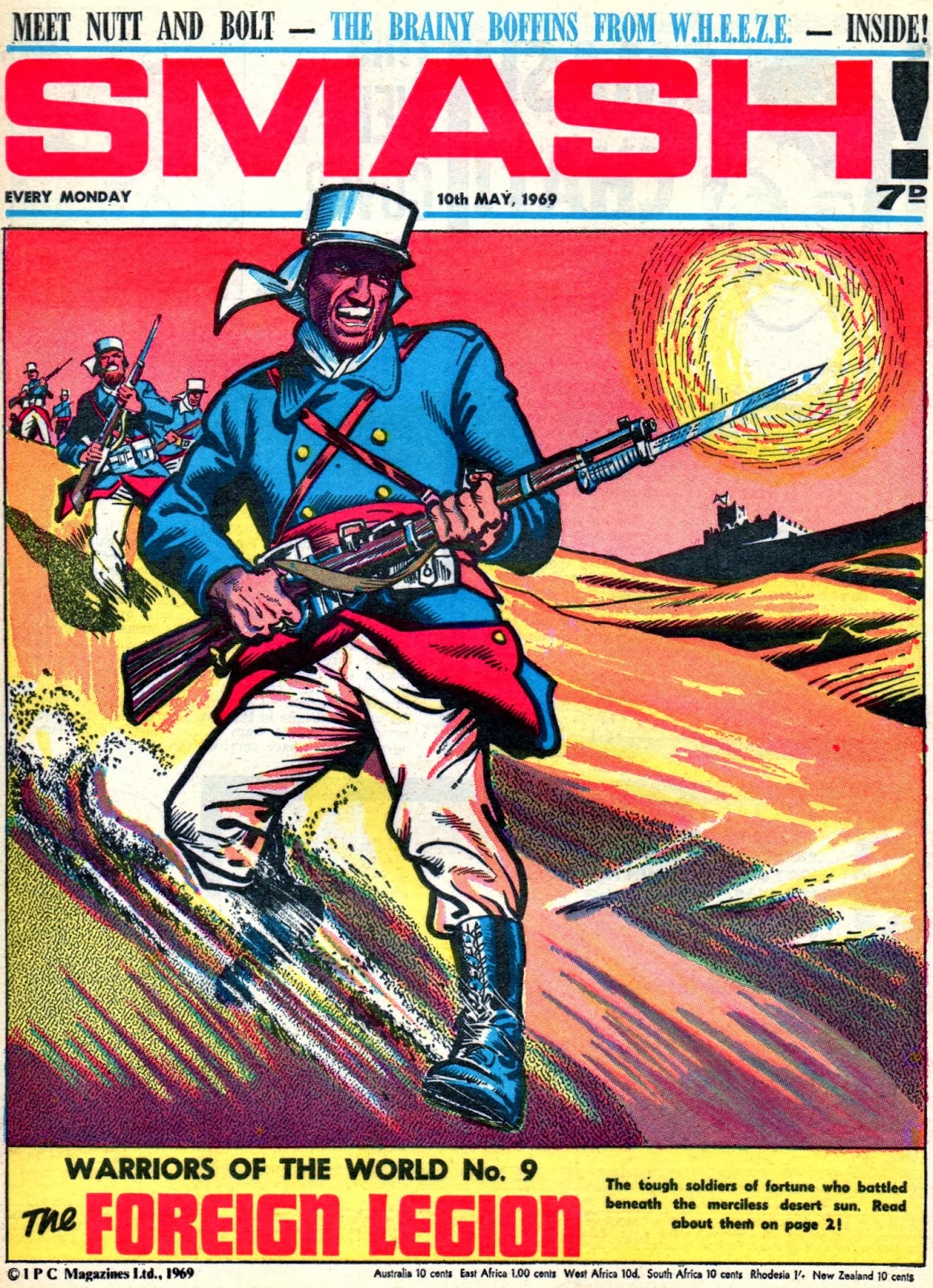 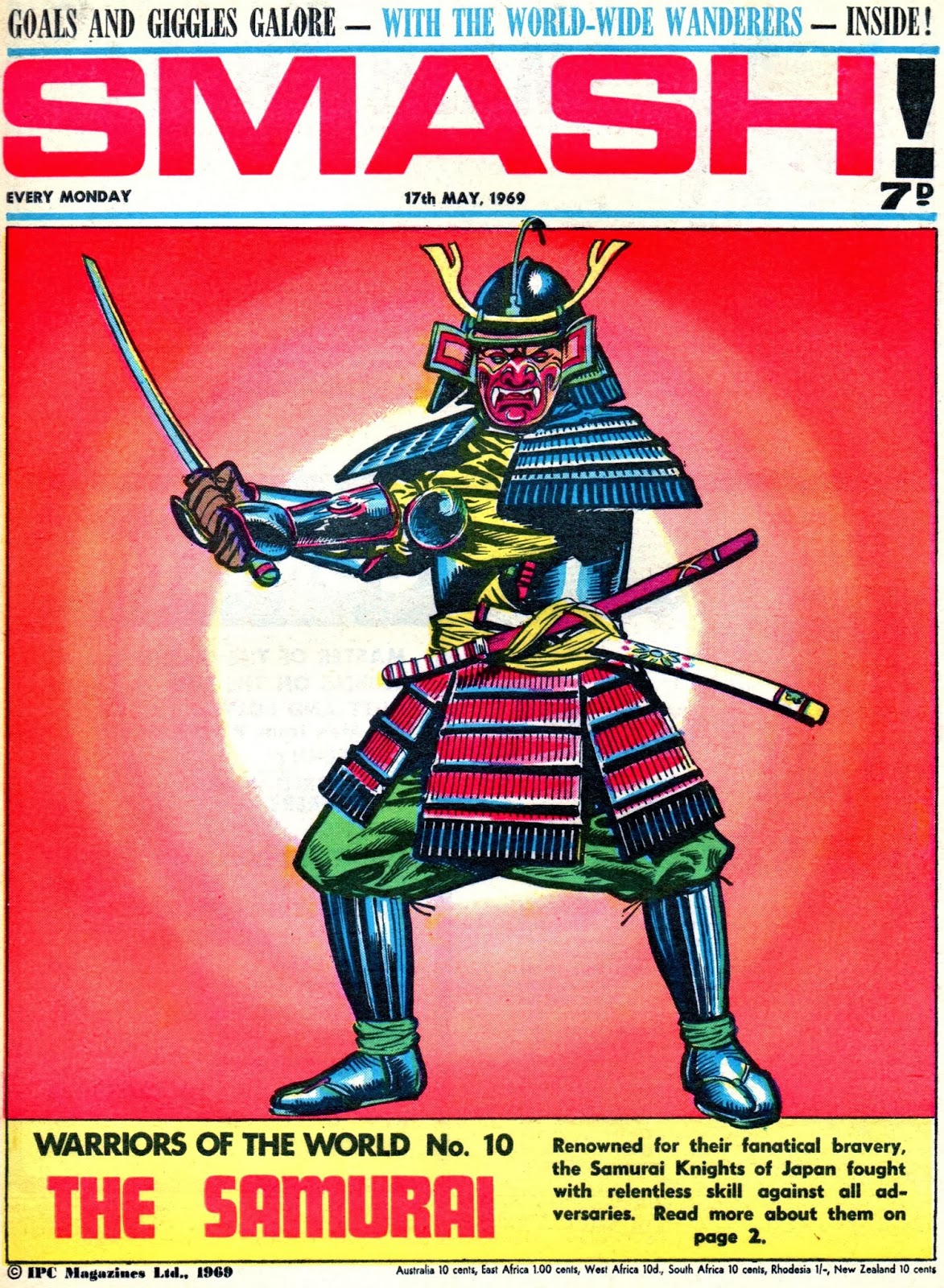 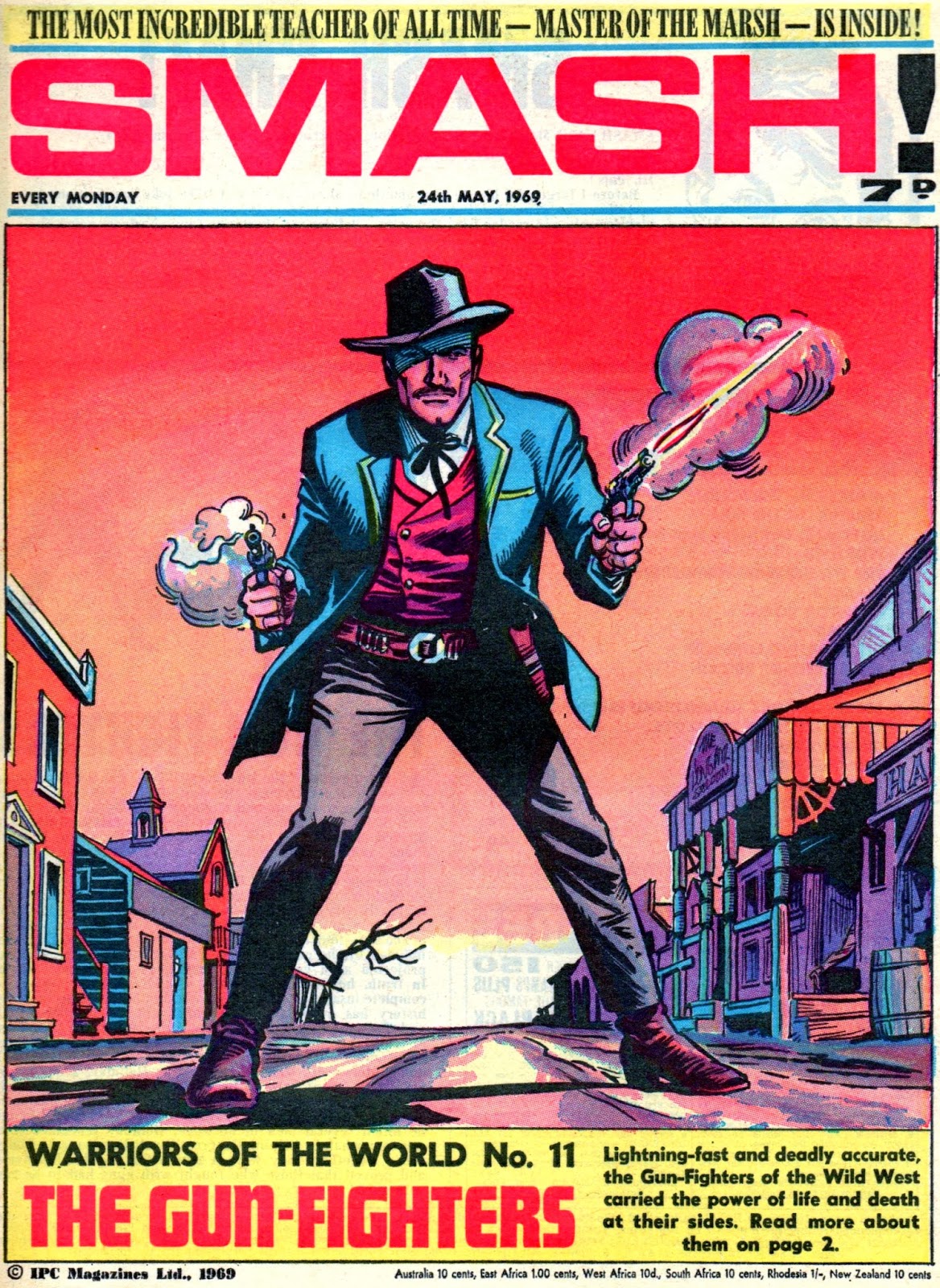 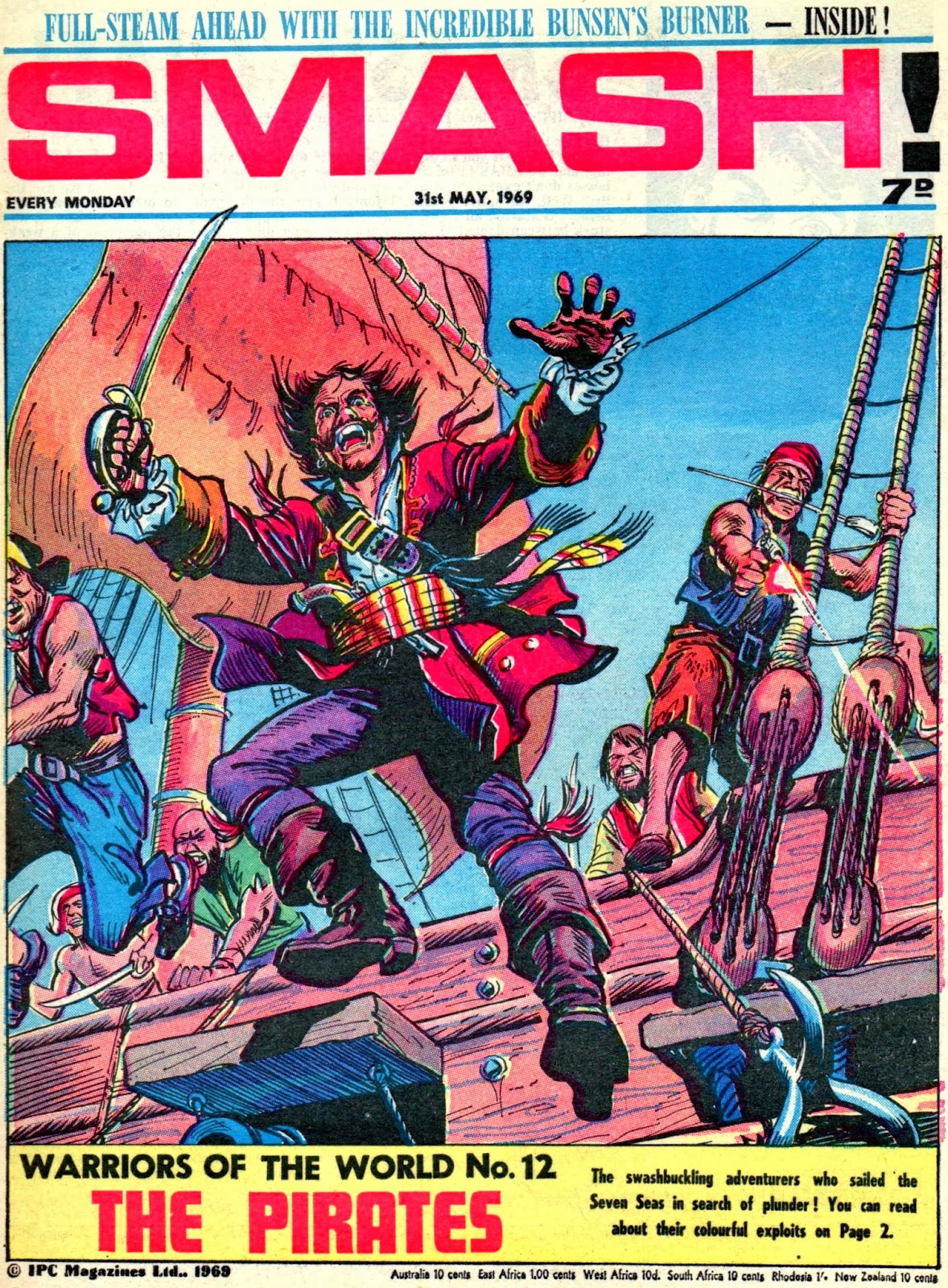 One small correction, Kid: after Warriors of the World ended, all the dramatic splash panels on SMASH! covers represented Simon Test stories; there were two series in SMASH! – The 13 Tasks of Simon Test lasted for 12 weeks, followed immediately by The Curse of the Conqueror (35 weeks). So rather than being splash panels representing various interior stories, all 47 essentially belonged to a single story.

And that was the one story amongst the various that I was thinking of, Irmantas. I'll amend the post to make it clearer. Ta.

One even smaller addition to the covers Kid; If my maths are correct and according to your first SMASH blog Smash lasted 94 issues of these 46 issues featured "Warriors of the World" and 47 issues featured "Simon Test" on the cover = 93 covers in total - The remaining cover was of Frances Lee (Manchester City) who was "used" to advertise the "My Favourite Soccer Stars" picture cards that were given away across the IPC boys line at the time (February 1970) - I wasn't sure how long that free gift ran for and assumed at that time Football stars featured on the cover for a while and not just one issue as it may seem they did (and wasn't aware Simon Test featured for so long either)

McScotty, there was indeed an illustration of said footballer on the cover for the 7th February issue. The football gifts lasted another three issues, and there was an insert-illustration of the fact on the Simon Test covers. I'm assuming that these cards included the Gordon Banks one I had as a kid. I was never into football, but I liked Gordon Banks because he was the best at what he did - and because his name was Gordon, of course.

Ah, that rings a bell. Funny thing is, even 'though I wasn't into football, I bought Shoot!, Scorcher, and Score when they first came out. I've got a scan of the front of that Banks card, which reminds me of those days.

I remember going to a Christmas party in the village hall when I was about nine (so Xmas 1975) and we all got presents - mine was a football book which was of no interest to me, I'd much rather have got a Marvel annual but I suppose all the boys got a generic "boy's" present and all the girls probably got a doll.Even an Action Man would have been preferable to a football book.

Action Man was a British name for an American toy, Col. G.I. Joe was first introduced in America in 1964 by Hasbro (Hassenfeld Brothers, if I recall correctly), and repackaged by Palitoy as Action Man for Britain in 1966. (The original ones on sale were actually G.I. Joes in Action Man boxes.) Then Palitoy acquired their own moulds and started producing their own figures, which had both the Hasbro and Palitoy names in the small of the back.

Pedigree had tried to acquire the rights to G.I., Joe but lost out to Palitoy, so they produced their own figure - Tommy Gunn. There's a post about him on this blog somewhere.

The first Action Man I got (in the AM box) was indeed a GI Joe (the "doll" had "GI Joe" stamped on his bahookie). I dont remember the Tommy Gunn figures that well but seem to recall they were pretty well made.

That's right, McScotty - the name G.I. Joe was stamped on the American figure's bum, the British one had something like 'Made in England by Palitoy, Under Licence by Hasbro(C) 1964' stamped in the small of the back.