HUMOUR IN A JUGULAR VEIN - PART ONE...

There are some people who think that FREDRIC WERTHAM's so-called 'anti-comics crusade' had an entirely negative effect on the comicbook industry way back when.  However, to quote a line from a well-known song from the classic film, CHITTY CHITTY BANG BANG, "From the ashes of disaster grow the roses of success!" - and MAD was most certainly that.

For its first 23 issues it was a comicbook, featuring lampoons of well-known comic strips, books, TV shows and movies, before switching to the magazine format that we all know and love today.  So, for all the nostalgists amongst you, here's a look back at the very first issue from 1952.  We start with a JACK DAVIS drawn tale which is positively calculated to drive you - what's the word again?  Ah, yes - MAD!  (Don't say I didn't warn you.) 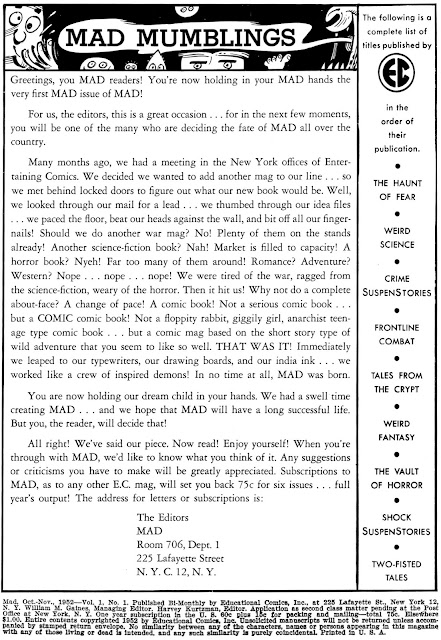 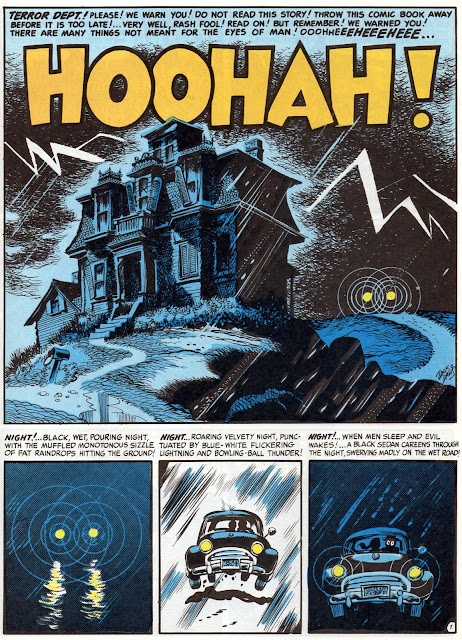 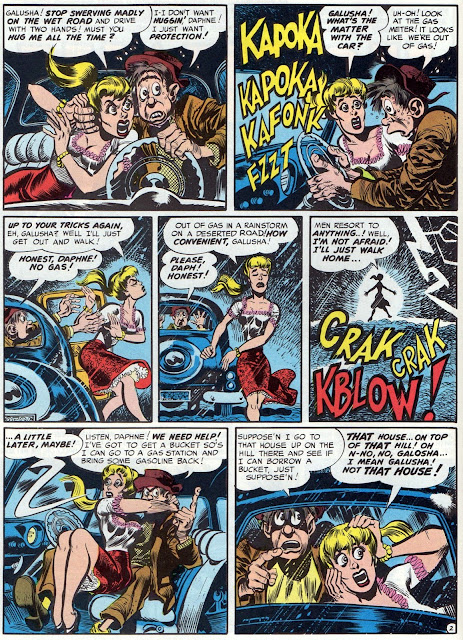 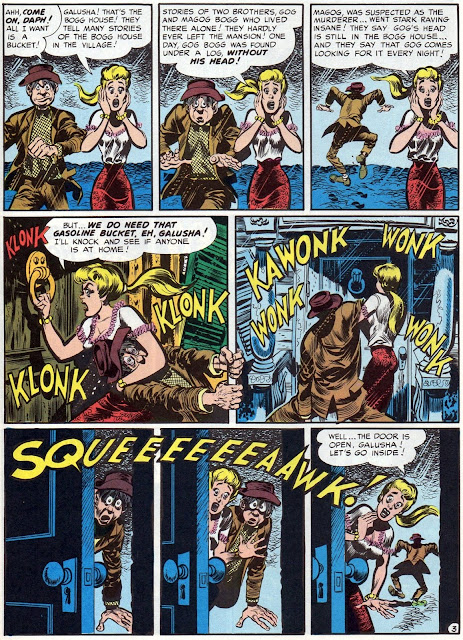 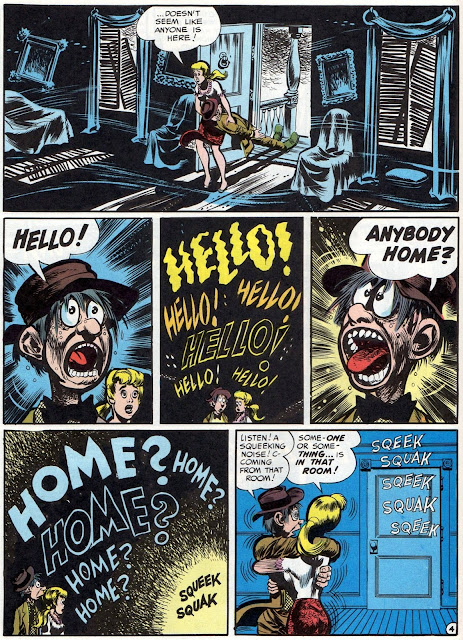 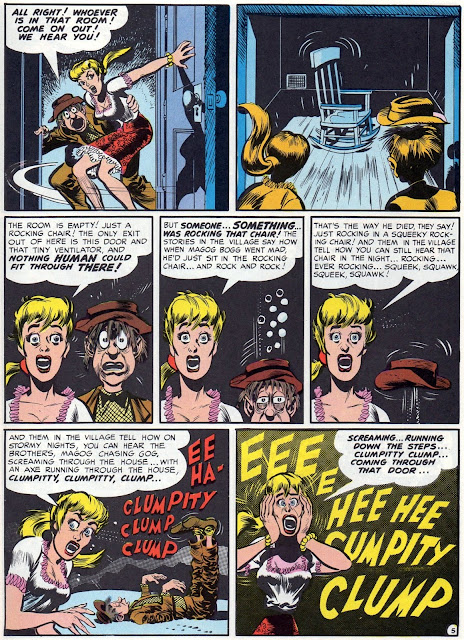 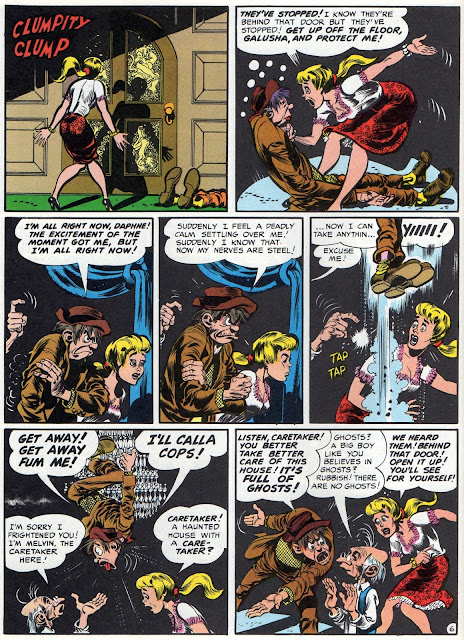 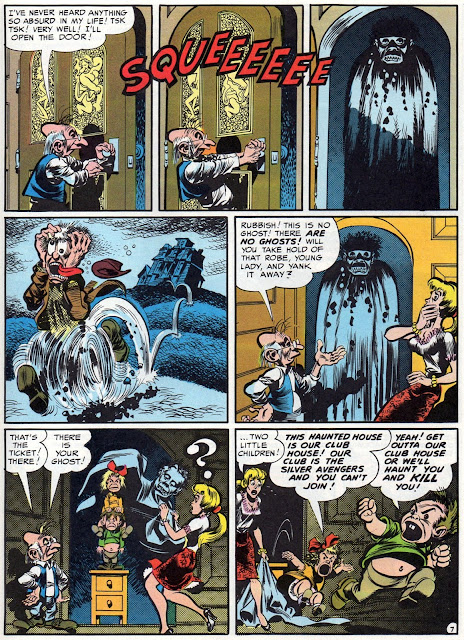 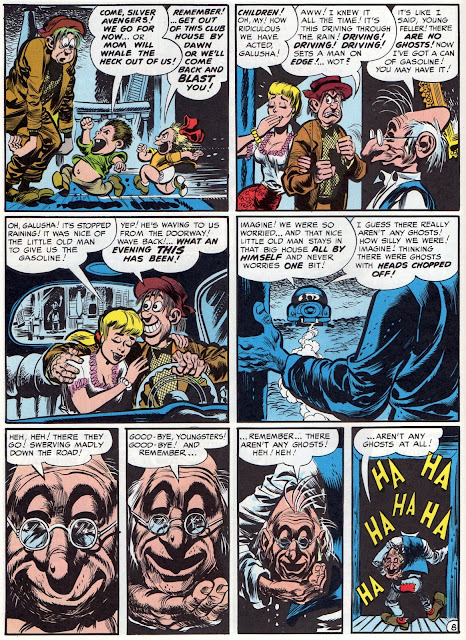 Good one, never seen the first issue! Got loads of the collected paperbacks and a fair few issues from the 1960s, but the early comic-format will always be where it's "at" for MAD.

Even the MAD cash-in titles were great, stuff like Cracked, Get Lost and Bananas... All good fun.

MAD these days is hit-and-miss. The masses of adverts are the first obvious turn-off, but then they also have amazing stuff by Tom Bunk, Sergio Aragones, and still the odd bit of Spy Vs. Spy. It's a comic/magazine that I'll always have a special place for.

Thing about the ads, THB, is that it helps pay for the colour within the mag these days. It's still number one in a field of one, I reckon. Shame it doesn't sell more.

Ah, the great Jack Davis - does his art ever remind me of my school days!; cards, stickers and a particularly lurid purple book cover with ghastly creatures all over it. Loved it. The MAD I remember was full of Arogones' marginal cartoons, Don Martin's angular characters, Spy v Spy, the fold in picture and especially the art of Mort Drucker.

"Number one in a field of one" sadly applies to a lot of comics now.

I know what you mean, but it doesn't so much apply to a 'lot of comics' as the only one of its kind left standing - The Beano. That truly is 'one in a field of one', sadly.