As promised to all you Crivvies last time, here's the second part of the GERRY ANDERSON content from the 1963 TV COMIC ANNUAL (released in '62), including the game on the back cover and the accompanying spinner and counters.  Now, printer permitting, you have everything you need to have a go at reliving a game from your long ago childhood.

When the FIREBALL XL5 story was being prepared for the annual, the show had not yet aired on TV, and it's clear from the art that some drawings of the actual craft were based on concept pictures of Fireball at an early stage in its development, when it had a slightly sleeker design and was called CENTURY 21. That's right - Fireball XL5 was originally named Century 21 and was a silvery-blue-ish  colour.  (See pic.)

It seems that the artist, NEVILLE MAIN, only had reference to black and white photos, as the colours of the crew's uniforms don't match up to their TV counterparts.  However, this was the first time that Fireball had appeared anywhere, so it's a genuine collectors' item.  Not quite up there with mighty MIKE NOBLE's supeb strips in the later TV CENTURY 21 comic, perhaps, but a nice enough little tale for the slightly younger readership that TV Comic attracted.

And once again, BILL MEVIN turned out a nicely drawn story of SUPERCAR, with an effective application of colour that would've had a greater impact on readers of the '60s than it does us, as the programme was made and broadcast in monochrome.  That was one of the attractions of TV21 when it made its 1965 debut  - viewers could see the characters and craft of their favourite puppet programmes in colour, many for the very first time if they'd missed the TV Comic publications.
Anyway, that's enough prattling preamble from me - we now unleash you upon all the pretty piccies.  Enjoy. 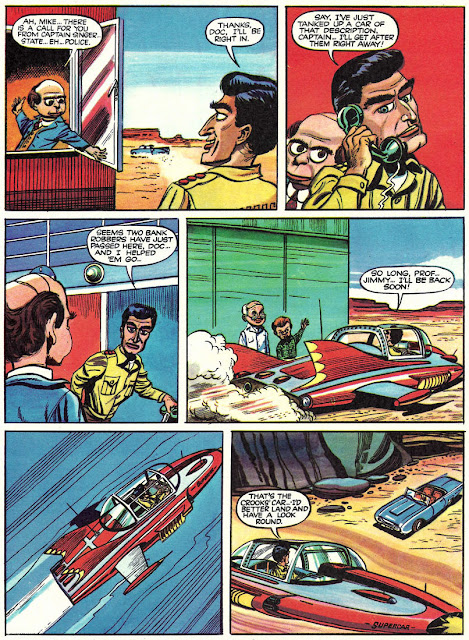 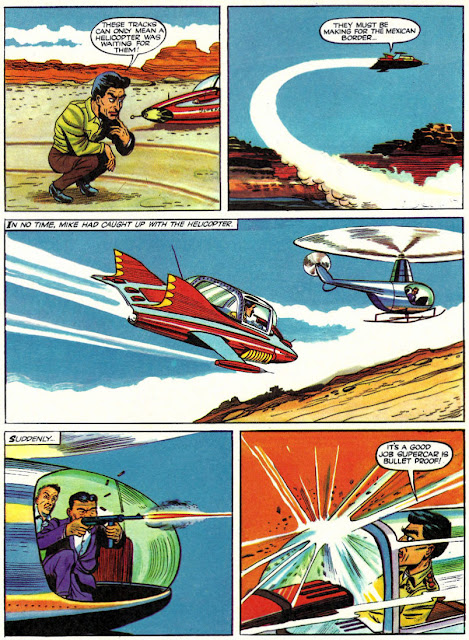 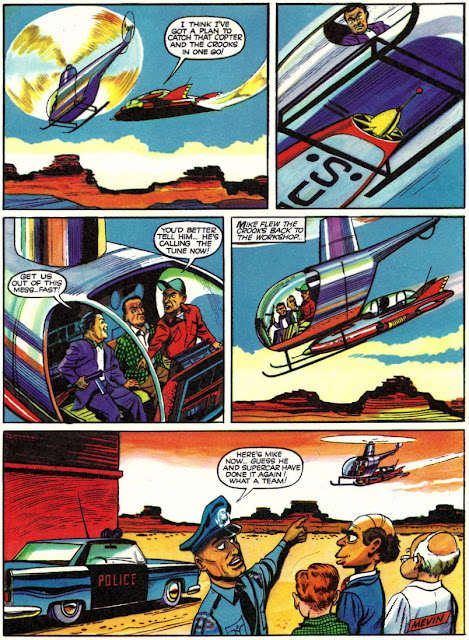 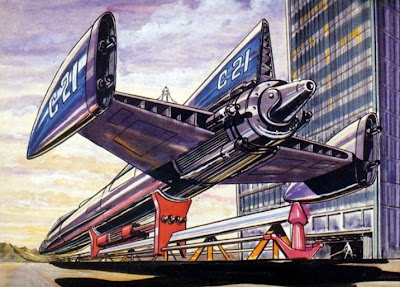 Not from the annual, here's a concept drawing by DEREK MEDDINGS of Fireball XL5 when it was originally called Century 21.  As you can see, the first drawing  (as well as one or two others) of XL5 in the story below seems to have been based directly on the visualisation above.  (In regard to shape - especially the nose-cone - not colour, obviously.) 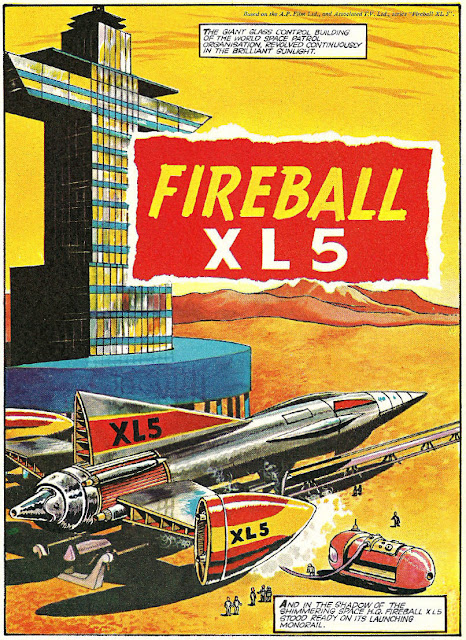 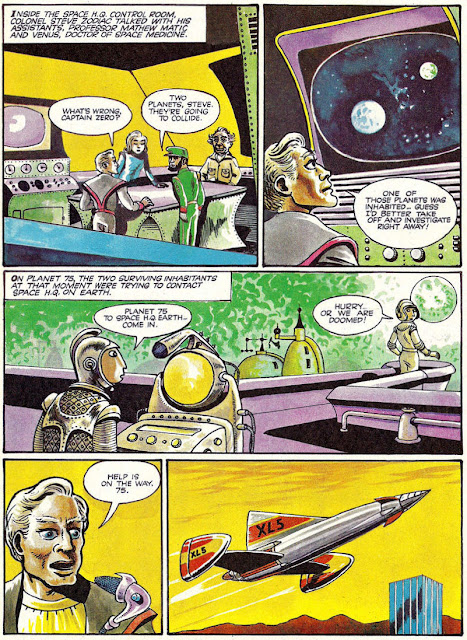 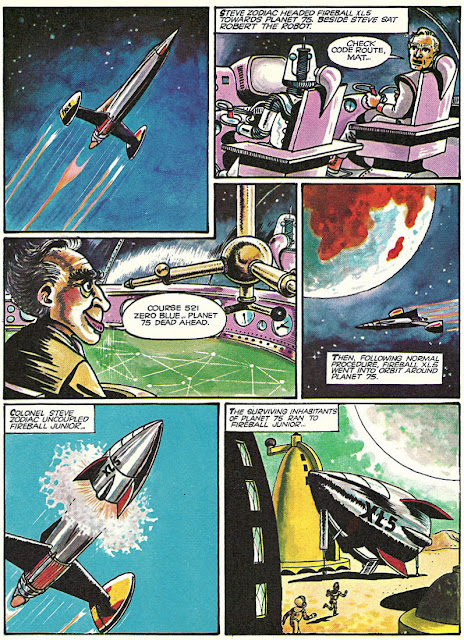 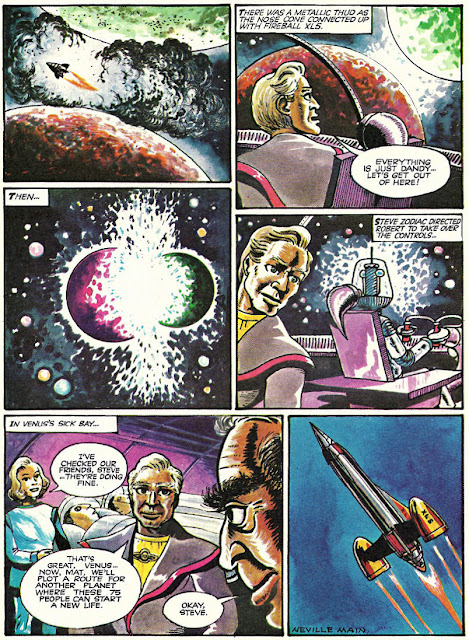 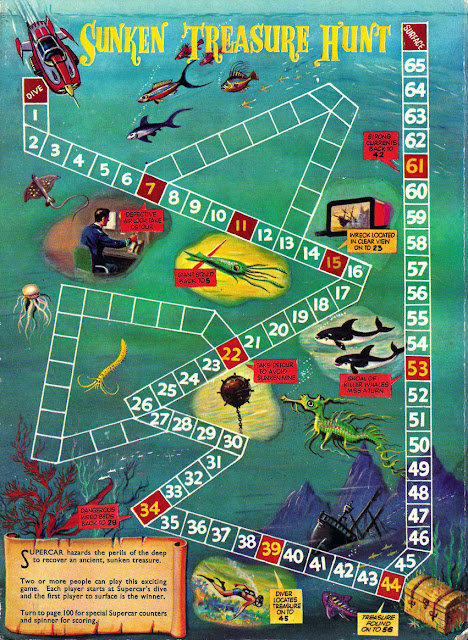 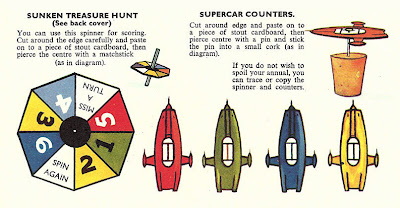 Kid, it was interesting seeing the Supercar and Fireball XL5 pages for the first time. Here are my reactions:-
Supercar is a show I never was exposed to as a kid, all I have seen are some small excerpts on Youtube, so I have no real connection to it. It seems strange that the artist drew the characters so stiffly, actually posing them as puppets. To me eyes it looks from an even earlier time than the 1960s.
Fireball XL5 is a show I do remember from the mid 1970s, in my region it was on tv during school summer holidays in the early afternoons. The artist now interprets the figures as caricatures of people. Steve Zodiac looks like a middle-aged man. In that final panel appearance, Steve looks like Lorne Greene (Battlestar Galactica) while Venus looks like an even older Barbara Bain (Space 1999)! I suppose both examples reflect the primitive style of those early series. Children must have looked at things in a different visual perspective 50 years ago, less sophisticated than today, although this style sat next to the much slicker and more mature art of Mike Noble.
I think if I was exposed to the original shows and these kind of comic adaptions as a young impressionable child they would have a certain nostalgic appeal, but viewing them for the first time is certainly different. But, it is good to view the action/adventure comic strips from this period before things really exploded in the mid-60s, getting a sense of the evolution of the genre.
(Jake)

What we have to remember, I suppose, is that TV Comic was for younger readers and, as Supercar and Fireball were puppet programmes, the editor probably felt that Mevin's and Main's art was more suited for strips based on the TV shows. The Range Rider (previous post) was a live-action show, so someone like Mike Noble was more suited to that kind of strip.

Remember also that when the Fireball strip was drawn, the programme hadn't yet appeared on TV, so Neville Main was probably working from only a few black and white stills for reference.

As you say 'though, it's interesting to look back on how things were once done. And it certainly makes one appreciate the high standard of art in TV21 all the more.

Many thanks Kid, I had no idea Range Rider was a tv show. I googled it and found out it was a us show from 1951-53 starring Jock Mahoney and that it did not turn up on British tv until the 1960s. I am not a western fan, but I do like watching things with Jock in, I saw his other tv show Yancy Derringer on youtube. We just don't have real men characters like him anymore, the nearest in recent times I suppose was Tom Selleck. So I will watch some of the full episodes that are on youtube.
You obviously have a fondness for the Supercar and Fireball art and stories, it all evokes memories and emotions for you. But, me personally I just don't see the quality that you do. I actually thought that the two stories were illustrated by the same artist in different styles. That just proves that I only glanced at the artwork and was not drawn in to really absorb it. I contrast that with the Fireball XL5 lunchbox designs by Wally Wood that I have seen, now that artwork stands up 50 years later. Maybe it is unfair to compare the two British artists with One of the Greats.
(Jake)

Jake, I was unaware of the strips when they were first published, so I have no 'actual' memories of them, but they do suggest associations with a particular time and place to me when I look at them now.

I wouldn't offer them up as great examples of comicbook art PER SE, but for a comic for young kids in the '60s, they are not without their own (dated) charm. They are of their time, I suppose, but they fulfilled their purpose well for the audience they were for back then.

I have a re-released version of one of those Woody XL5 lunchboxes. Great stuff.

I would assume that the characters were drawn to look familiar to fans of the TV shows. Of course, to anyone not familiar with those shows, the stiff poses and large heads may be somewhat jarring.

In a case similar to the Fireball XL5 strip, I think that Gold Key/Western prepared their Voyage to the Bottom of the Sea comic before the TV series premiered, so the designs of the Seaview and, later, the Flying Sub, were based on preliminary concept art, and looked different from the final versions that appeared on TV.

Re: Steve Zodiac and Venus looking older in the comic, the Voyage to the Bottom of the Sea comic was the opposite. In the comic, Admiral Nelson often looked more like Flash Gordon or Steve Canyon, and he looked too young to be a retired four-star officer.

IIRC, Range Rider was produced by Gene Autry's production company. It was basically a children's action series, like Hopalong Cassidy or The Lone Ranger.

Jock Mahoney was a stunt man at Columbia Pictures in the early 1950's (he doubled for Charles Starrett in the "Durango Kid" series) before graduating to playing speaking parts and achieving minor stardom. He also played Tarzan in two movies, "Tarzan Goes to India," and "Tarzan's Three Challenges." IIRC, his last on-screen appearance was a small part in "Bandolero," with Dean Martin, Raquel Welch, and James Stewart.

I remember seeing Fireball XL5 (and Thunderbirds) lunch boxes ca. 1964-65, but I didn't know until now that Wally Wood had anything to do with them. Of course, when I was six, I would not have known Wally Wood from Grant Wood, anyway.

Thankfully, when TV Century 21 took over the strips, it portrayed the characters (with the exception of Supercar) in realistic proportions, TC.

And I don't even know who Grant Wood is, TC. I've known for a number of years now that Wally Wood did the Fireball XL5 lunchbox because I bought a re-released version from Forbidden Planet back in the '90s sometime.