JOHN SEVERIN was much more than 'just' an inker of HERB TRIMPE's pencils for The INCREDIBLE HULK, or his sister MARIE's work on KULL The CON-QUEROR - he was a mighty fine artist in his own right.  He was so good that he was one of the primary cartoonists on the early MAD comic, though he later became more associated in many fan's eyes with Mad's rival, CRACKED magazine.  (Which had the good sense to admit that it was "Number two in a field of one!")

Anyway, John's strip brings us to the end of our four-part tour through Mad's first issue.  Hope you enjoyed it, and that you're soon let loose from those long-sleeved pyjamas that tie-up at the back.  And don't worry - a nice young nurse will be around shortly to give you your medicine.  You'll get outta here yet - trust me, I'm a doctor!  Now, excuse me while I take this little pill and - ZzZzZzZzZzZ! 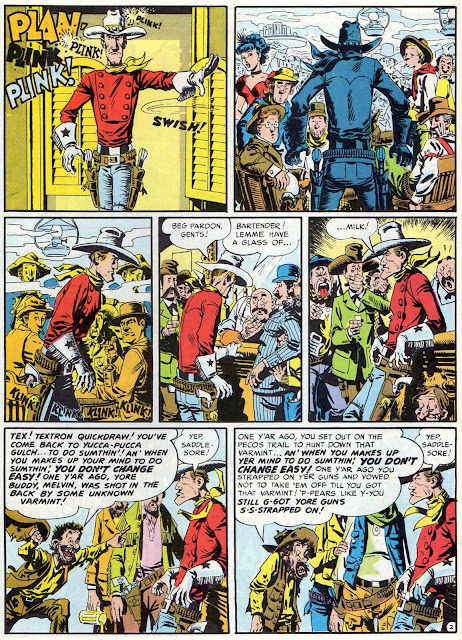 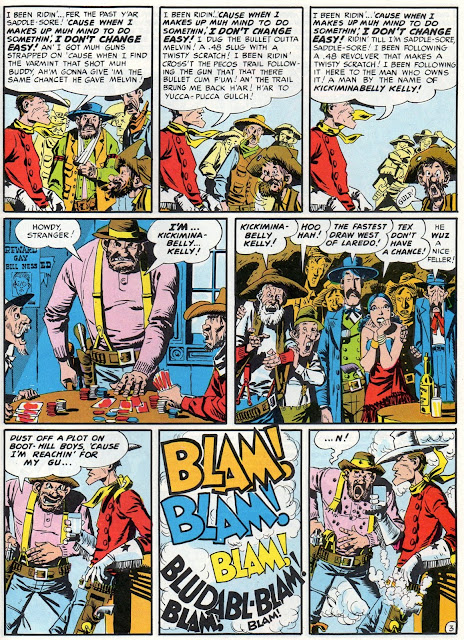 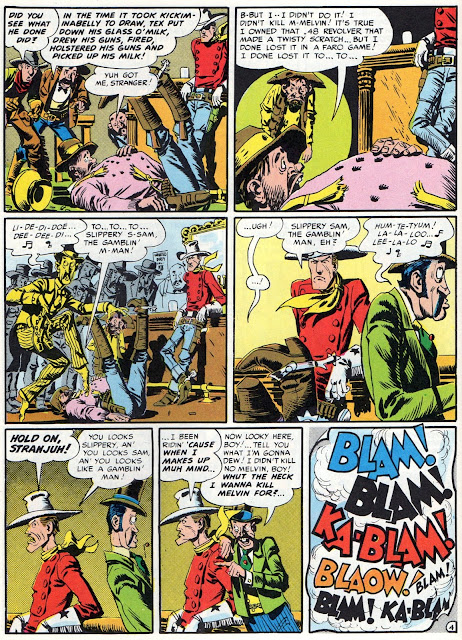 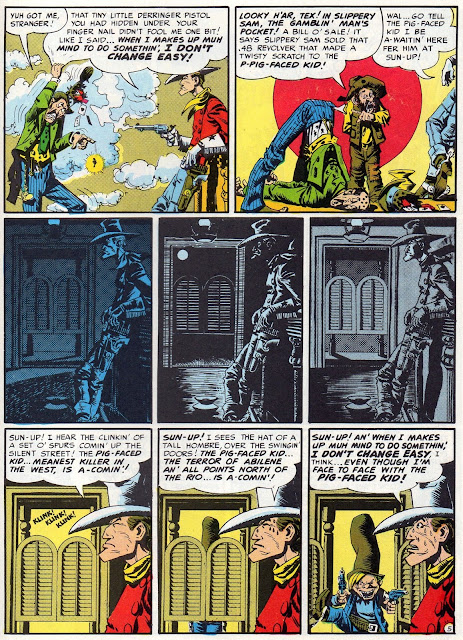 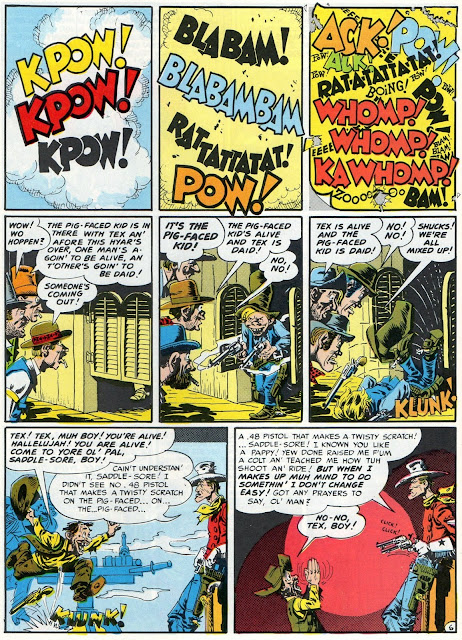 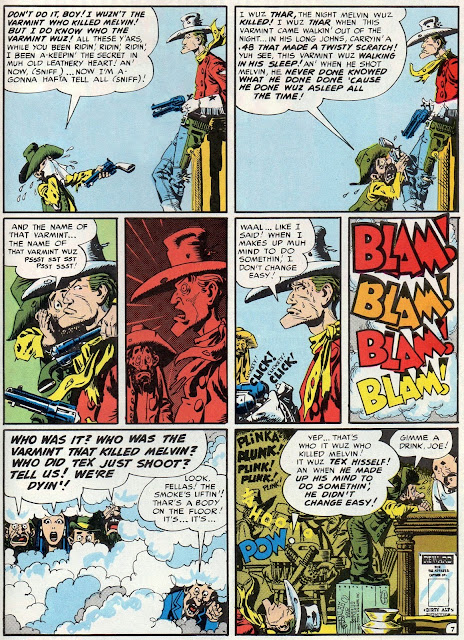 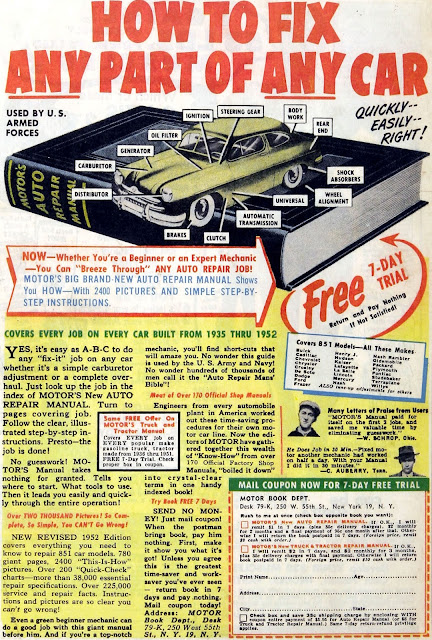 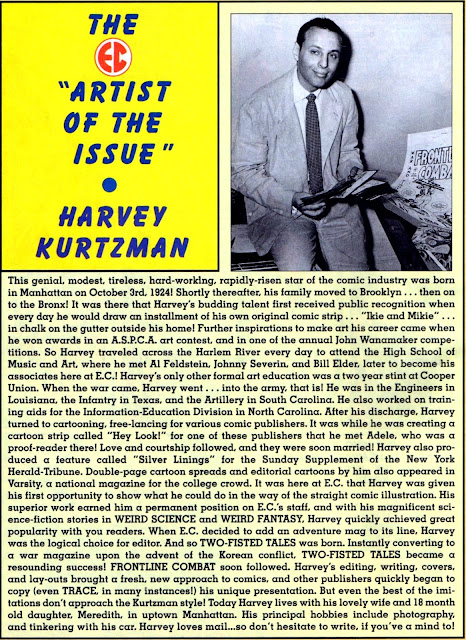 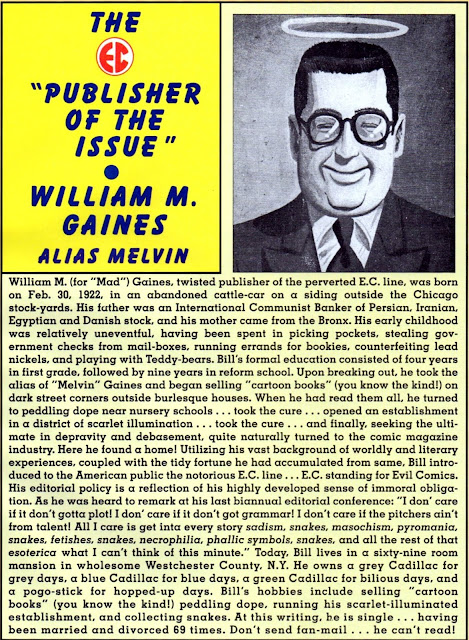 I noticed that you have page 29 twice, but page 28 seems to be missing from the posting. Hoping you can rectify the situation. Thanks for continuing to showcase the art of some early practitioners of this medium.

Sorted, JS. That's what comes from working from thumbnail images with similar last panels. Glad you're enjoying the posts.

Kid, its funny, but the first time I noticed John Severin's art was in a copy of Cracked, that I bought 30 years ago, while at school in London. It seemed he drew the cover and every other strip in that issue! I still remember his contributions very well, but totally forget what else was in the magazine. I had no idea he was one of the original MAD artists in those days.
His style never seemed to change or evolve over the decades and it looked pretty much the same whether the subject was humour or drama. I don't mean that as a criticism, just very unusual over such a very long career. He certainly suited doing this western parody in Mad and the Kurtzman direction, poses, staging and energy is much in evidence.
(Jake)

I've got the first British edition of Cracked somewhere (which I think was just a regular edition with 'first issue' tacked on for U.K. readers), so I'll have to dig it out at some stage and feature it on the blog.

I think John's action//adventure work for Marvel (Kull covers) wasn't so 'samey' as his humour stuff, 'though it might've been for other publishers. No doubt he was under instructions to 'think Kirby'.

Kid, I just looked at the Kull covers you posted on your site in May and to me, it's unmistakeable Severin. I don't think Severin could draw funny as could Davis, Wood and Elder, or be as dramatic as them, but his drawing was very sound. I think the visual humour in the Varmints strip derives from Kurtzman's layouts. You really see the Kurtzman style in this strip much stronger than on the other ones, because he appears to follow Kurtzman more faithfully while the others added to the pencils. Of course these are just my opinions.
I never knew there was a British Cracked! I did buy the British Mad a couple of times in the late 1970s ( I could not resist their first Star Wars parody) and then for a few months; 1989-90. I had stopped buying comics many years before, in my early teens.
(Jake)

I think I've slightly missed your point, Jake. I thought you were saying that Severin's work looked the same regardless of whether it was humour or adventure. My point was that, while his inking style was undeniably Severin in both cases, his action art could never be mistaken for a humour strip (or vice versa). From what I remember anyway.

One thing's for sure - he was pretty durn good.

I do agree with you Kid, there is a difference in the Severin humour or dramatic style, but it's a subtle difference. His "funny style" is not so distorted in say, human proportions from his realistic renderings. The characters are not funny to look at as say Davis or Wood, when they approach humour. There is no great exaggeration in features or posture, everything is somewhat understated, it's not so cartoony, for want of a better word. But, despite what I wrote, I really do enjoy Severin's approach to both genres, I think his art had an X-Factor. To be honest, I prefer Severin to Elder. Severin is under-rated.
(Jake)

His sister Marie would've been a perfect fit for Mad. I winder if she ever did anything for them?

Kid, Marie Severin never drew anything in Mad, but maybe she did some of the colouring. Oh yes, I would have loved to have seen her contribute in a big way to Mad! Mark Evanier has one opinion about why Mad never used her in the book:-
Marie Severin: The Mirthful Mistress of Comics
TwoMorrows Publishing 2012

Interestingly, it was because of Marie Severin that I started reading MWOM... almost 40 years ago (Gulp!).
I saw #43 in my local newsagent, the 22 page epic of the Hulk and Submariner scrap. I did not notice the artist names in those days. The only name that always stood out was Stan Lee! I never even thought about that a woman had drawn it, just that the art was amazing. It made a bigger impression on me than even the Jack Kirby FF vs Molecule Man! So, the next day I went and bought SCW and for the next 6 months I continued to buy the Marvel British weeklies. So I can say that Marie Severin was a big influence on me. I liked her Hulk. The stories that stand out were: The Space Parasite, The Rhino and especially the Inhumans! Later I saw her version of Dr Strange (I believe it was drawn before the Hulk). At first I did not like it, but who could follow Ditko? Some of it looked like pencil drawings, or maybe it was just bad reproduction. But, the more I looked at it, the more I appreciated the style.
Of course, Herb Trimpe took over the Hulk and another of my favourites was the Ka-zar story inked by John Severin. Because of that story, I wrote and drew my own mini-comic of a jungle lord and the "style" was definitely influenced by John Severin! It's funny, but I never realised this before as I look at my recent artwork now and I still see that little part of John Severin; the 'feathering' technique especially...
(Jake)

Jake, I loved that Hulk versus Sub-Mariner scrap too, but I first read it spread across a few issues of Fantastic back in the '60s - same goes for the Space Parasite tale. I've still got the MWOM presentations of each story - and I also have both original American issues as well.