I can remember where and when I first laid eyes on Hanna-Barbera's Fun Time #1 as if it were yesterday.  'Twas on the counter of W. & R. Holmes sometime near the end of October or beginning of November in 1972.  I seem to recall being surprised to see that it 'incorporated' Yogi and His Toy, as that suggested Fun Time was a pre-existing comic instead of a new first issue.  I guess I'd stopped buying that particular weekly by then otherwise I'd have known about Fun Time prior to seeing it on sale.  (Maybe I did, but have just forgotten since.)

Anyway, I bought it, but goodness knows for how long.  Did I purchase all 22 issues (according to one of Denis Gifford's comics catalogues) or did I abandon it before then?  Dunno to be honest, but the first cover always reminds me of Holmes, and in particular standing in front of that counter back in the day.  That's why I bought a replacement recently on seeing it on ebay, so that I can once again enjoy the cool interiors of a much loved, much missed, long-gone shop from my childhood and teenage years - even if only in memory.

Any other Crivvies do that?  Buy back issues simply to remind themselves of where they were when they bought the original, rather than because of the merits (if any) of the comic itself?  If so, feel free to express yourselves in the you-know-where. 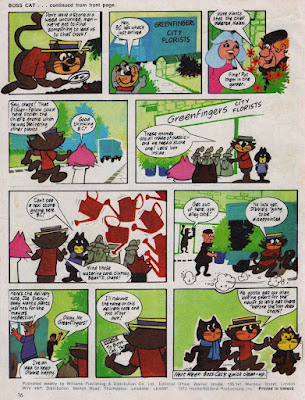 I would say that 90% of my back issue purchases are due to the fact that the comic reminds me of a memory from the past. But I don’t think I would pick up just any comic that reminded me a particular time, place or person from the past it would have to be a comic that I liked and there as so many good comics out there that do that for me. I have list of at least a dozen old comics I would like to buy that hold fond memories for me.

I'm the same most of the time, McS, but sometimes there's the odd comic I'll buy just because it takes me back to an earlier time - even if the comic wasn't all that good. I don't think I even thought that Fun Time was all that good back in the day, but one glance and I'm back in that shop.