RECAPTURE YOUR CHILDHOOD WITH CORGI... 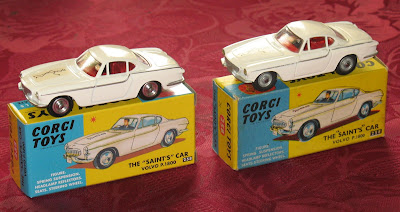 Above, two versions of The Saint's Volvo P.1800, and also repeated below for good measure.  One is the original 1965 car (well, a later edition in the '60s run, with different 'hubcaps'), the other is a recent reissue by Corgi, in conjunction with Blue 14 DTC Brands.  Can you spot the difference?  There are some very slight ones, but nothing to write home about. 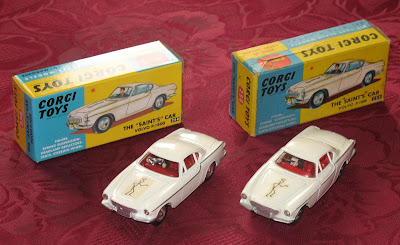 Take a look at the base-plates, which are distinguished mainly by one saying 'Made In Gt. Britain' and the other saying 'Made In China'.  However, the new box says 'Designed In Gt. Britain' to capture that '60s feel, and instead of Playcraft Toys Ltd., it says Hornby Hobbies Ltd., who now own Corgi (as well as Airfix and most likely some other brands). 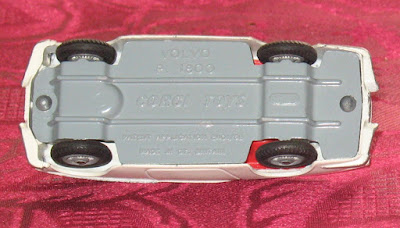 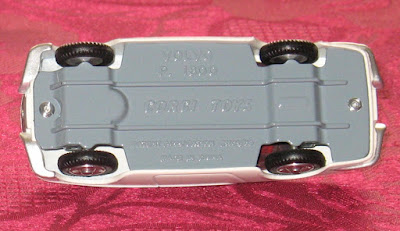 There are other reissues on their way, including the gold-coloured Aston Martin D.B.5, which going by the photo at the top of this post, is closer to the original 1965 version than any other 'reissue' Corgi have thus far produced.  Oh, and the Batmobile is also one of the range, so that's something to look forward to. 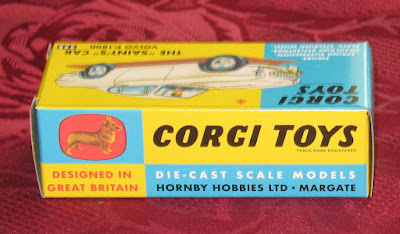 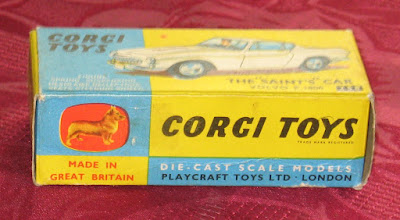 Below are another couple of reissues, along with a free facsimile of the 1966 Corgi catalogue, which can be obtained as part of a special offer from the Corgi Model Club.   So what are you waiting for?  Scoot over there now by clicking on the name above and avail yourself of a great bunch of stuff that's certain to return you to your childhood.
Me?  I never left mine. 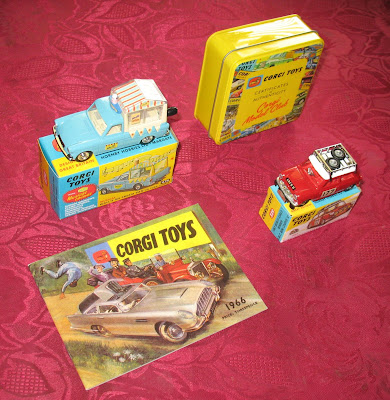 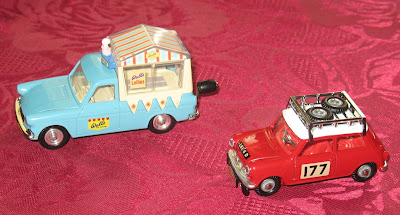 The only one of those I remember having is the Land Rover, and I'm convinced it's the source of my life long love of Land Rovers. Don't think I ever saw the gold AM when I was a kid, only the normal silvery one.

The gold one was the first, OD, and despite saying D.B.5 on the base, was actually a D.B.4 that was pressed into service because Corgi were in a rush to get it ready for Christmas '65. Two or three years later, they issued their second version, which was the correct silver birch colour and made from a newly created mould of an actual D.B.5.

Just to clarify, when I say a mould of an actual D.B.5, I mean Corgi created a brand new one from scratch, not modified an already existing one. (Nor did they cover a life-size, real D.B.5 with rubber in order to make a mould, in case you were wondering.)

Great post, Kid! I'm definitely in for the Saint's Volvo, DB5 and the Green Formula One racer. Kept the originals for years (with boxes) until I sold my complete Corgi and Dinky collection in 1984 to build a deposit for my first flat. My Corgi Ford Mustang was an early metallic lilac colour, though, and an earlier model that the re-issue of the one in the photo. Did you have that?

The only ones I had (and have) in the photo, B, are the Volvo and D.B.5. Incidentally, none of these reissues are going to be available in the shops (and the ice cream van is already sold out), so jump over to that link and see if the offer is of interest to you.

I actually had the Walls ice cream van lol . I also had the gold AM Bond car. My favourite ever Corgi was the VW Commer van with the TV camera on top (I think you showed this a while ago).

I think it was a good many years ago I showed that, McS. Tempus Fugit.

Wow! 8 years ago I would have said about 3 maybe 4 years tops - scary stuff.

Yeah, that's what I'd have said too. Scary doesn't describe it really, does it, McS. It's worse than that - terrifying.

I picture you as Cliff from CHEERS as you bestow these facts. :)

Ach, no, OD - I'm much more entertaining in my delivery.

I still have my original Saint Volvo and the VW Commer with the camera on top. I always liked the ambulance as well with its little red flashing torch bulb on its roof. Corgi made some damn nice cars back in the 60s

I remember the original Volvo in our house at the time, LH, but my brother must've brought it in. The one I have now is a boxed original I got many years ago, plus I now also have the reissue. I'm glad Corgi kept the design and spirit of the original box.

You're looking a lot brighter in your avatar, so hopefully that reflects you feeling a lot better.

Much much better as the weeks pass. I was told about 9 months before a full recovery.

I feel a baby joke coming on, LH, but I'll resist.