Time marches relentlessly on, and I find myself amazed by the fact that seven Annuals over a six year period were first published between 43 to 49 years ago.  In that time I went from being a mere schoolboy to a working 'adult', yet I doubt I was aware of the distinction back then.  I was just me, the same as always, and very often we're not really conscious of such changes in our circumstances until long after the fact.  Or are we?  It certainly doesn't feel like it to me in retrospect.

Anyway, several posts back I said I'd do a cover gallery of all 7 Marvel Annual tie-ins to the weekly comic The Mighty World Of Marvel, and as the final three that I needed to complete my collection arrived at Castel Crivens today, there's not much sense in hanging about.  I remember reading somewhere that the cover of the Annual for 1979 was drawn by Frank Miller (and I may well have repeated that claim on the blog somewhere), but inside the book itself, the cover is attributed to Tony DeZuniga and Pablo Marcos.

Perhaps there's a story behind it.  Is the book correct or is it a mistaken attribution after a last minute change of plan where Frank Miller had to step in to the breach after the credits were prepared?  I assume that whoever first made the claim must have a reason for crediting it to Miller, so if anyone knows anything about the subject, kindly step up to the plate and enlighten us, ta much.

I suspect (though I'm not 100% certain) that I had all of these Annuals back in the day, though there's a possibility I might've missed a couple of the later ones.  However, even if I did buy all of them as they appeared, I didn't always keep them from one year to the next, so today is the first time that I've owned all seven at the same time.

So which one's your favourite cover, fellow Crivvies?  I tend to favour the first two, though the 1976 one by Herb Trimpe is good.  Couldn't say whether he drew it specially for us Brits or it was lifted from a previous US source, but it's a nice piece of work.  Anyone know if it appeared elsewhere first and was 'borrowed' for the Annual?  Again, if so, share the details with your fellow Crivvies.

I have completed my task of attempting to entertain you all.  'Tis now your task to be entertained - so get to it and check out these captivating covers! 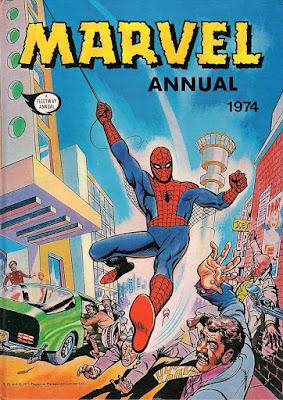 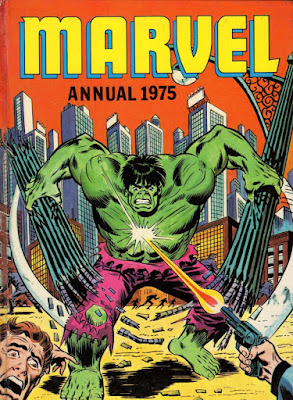 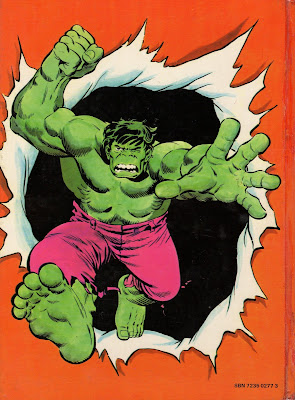 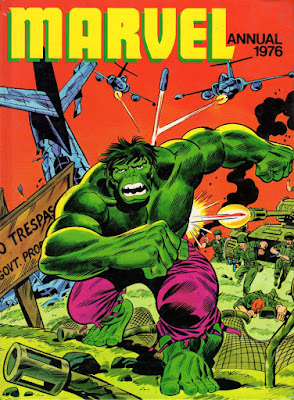 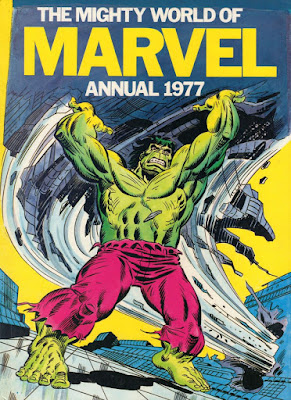 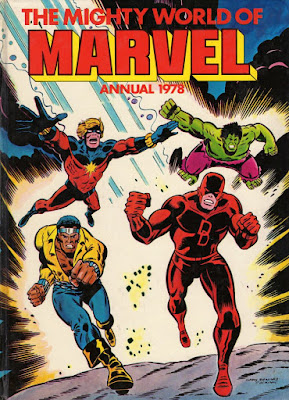 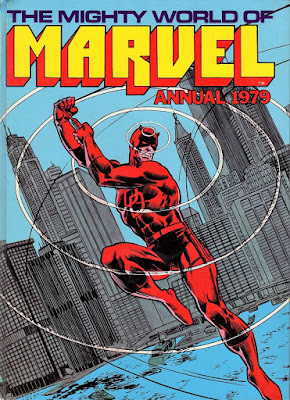 I recently said that I'd bought the 1979 MWOM annual but I must have been thinking of a Hulk annual because I definitely didn't buy that annual with DD on the cover. The one I'm thinking of had the Hulk and Sub-Mariner on the cover. Anyway, my favourite of these covers is the 1976 annual.

Yeah, it was the 1979 Hulk Annual you had, CJ. I showed it on the blog back in 2018 and you commented on it. The Herb Trimpe Hulk on the back of the 1975 Annual first appeared somewhere else, but the 1976 cover you like might've been specially drawn for the Annual. Anyone know?

I wonder why DD was chosen as the solo cover star of the 1979 annual and so prominent on the 1978 book.As far as I recall he wasn't rarely on the weekly MWOM covers . Although DD is one of my favourite characters it seems a strange choice . Cover doesn't look like Miller to me.

The 1979 Annual is easy to explain, McS - it's cover-to-cover Daredevil inside the book. The '78 one is harder as DD doesn't appear anywhere inside. The last time I recall him being prominent on an MWOM cover was #20, when he made his debut there in 1973.

I don't see much Miller in that last cover, I quite like the inking on it though, whether it was Marcos or someone else.

I do like the first cover, even though it looks very un-Marvelly in style. The Howitzer thing is as much the feature on the cover as the Hulk himself is- a Marvel artist would have had Ol'Jade Jaws much more prominent.

Also, Captain Mar-Vell: every tone I see him I think that his costume was as close to perfection as could be. A classic design.

The first cover is actually based pretty closely (might even be a tracing) on a panel in the actual Hulk story inside, DS. I think I read somewhere that Captain Marvel's (2nd) costume was based on someone else's, but I can't remember whose. Or maybe it was the other way around.