Some ebay sellers continue to disappoint me.  Even ones with 100% feedback can let you down in their customer relations technique (learned from Basil Fawlty it seems), and so reluctant is ebay to take action against offending sellers with 100% feedback, they'll sometimes remove honest negative customer feedback if the seller complains, as ebay don't want to sacrifice their percentage of that seller's profits.  I know that for an absolute fact 'cos it happened to me on a previous occasion.

He accepted, asking me for my email address so that he could send an invoice, and I sent it to his email address which was listed in his business details, and sure enough, an invoice arrived.  (Call me thick, but it never occurred to me that he was proposing an 'outside ebay' transaction until he later described it as such, as I was too eager to pay him so that he'd send the comics.)

He'd described them as 'very good/fine, complete, no cut-outs, no scribble', but when they arrived, one was defaced by a felt marker on the cover, which had also been absorbed into pages 2 & 3.  Now I don't know about you, but when a comic is said to have no scribble, I take that to mean it has no defacement by pencil, pen, felt marker, or any other kind of writing implement, and I don't consider myself unreasonable in that view.

I contacted Wayne Green (that's his name remember) and explained the situation, suggesting that a small partial refund of £3 or £4 would suffice in compensating me for my disappointment in finding that particular issue not as described.  (Incidentally, 52 wasn't great overall either, with multiple splits on the spines of almost every page, but I subtracted the pages with coupons and transferred them to the copy I already owned.)  Only 50 was in a condition that came near to matching the seller's description.

No doubt emboldened by the fact that he wouldn't have any negative ebay feedback to contend with, the seller 'declined' to accord me a small refund, and came up with all sorts of excuses for not doing so.  Remember, he'd accepted my offer of £20 per comic, but now claimed that #50 was worth around £50 and the other two worth only about a fiver each, so if he refunded me a few quid, he'd lose his profit on one of the 'lesser' issues.  While it's true that some sellers do indeed ask high prices for better condition copies of the 50th issue (on account of The Daleks being on the cover), it can still be obtained for a more reasonable price from time-to-time.

The simple fact is that, in this particular case, he was indulging in retroactive financial gymnastics in trying to ascribe different values to different issues, as he'd accepted my clear offer of £20 per issue.  That means, even if he was getting less money on #50, he was gaining more on #s 44 & 52, which considering that his description of condition was inaccurate (if not fanciful), he was still coming out well ahead on the deal - especially as he's avoided paying ebay's percentage.

He said that if I was so dissatisfied with the entire transaction, I could return all three comics, but I'd only expressed disappointment about one comic, not all three.  He also said if he were in my position, he'd return all the comics even if it meant losing a little money in doing so.

So look at the images and judge for yourself.  I'd say the defacements are pretty pronounced for a comic that was described as having 'no scribble', wouldn't you?  Totally unreasonable seller in my opinion, not prepared to consider things from the buyer's point of view.  A small partial refund of £3 or £4 (no big loss considering he'd avoided ebay fees remember) would've ensured I'd have bought other items from him from time-to-time, but there's no chance of that now.

So just goes to show - you can't even always trust some sellers with 100% feedback to behave reasonably, ethically, or decently.  Just thought you should know in case you ever consider buying anything from him. 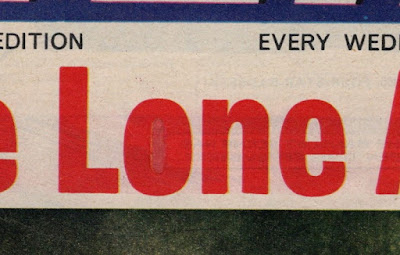 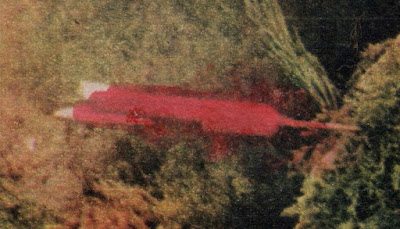 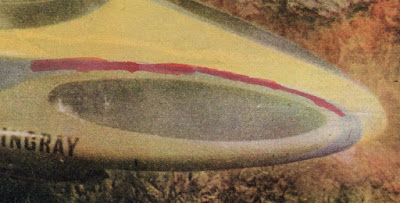 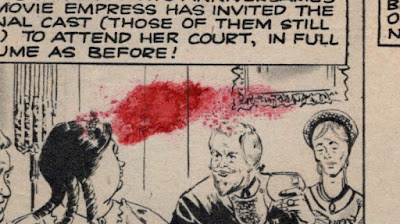 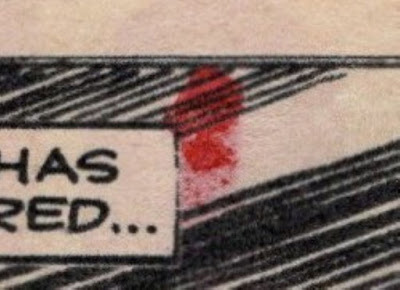 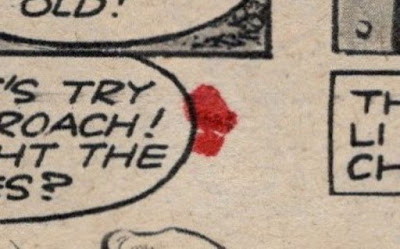 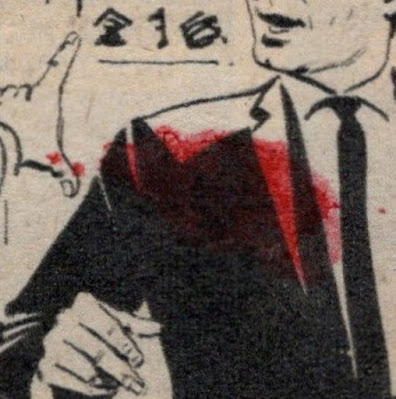 THE 'AFTER' EFFECT...
It's not quite finished yet, but here's the cover after I've started to do a bit of work on it to reduce the defacement.  Whenever I try the colours I've mixed on a piece of spare paper, they seem a perfect match, but when I apply them, they somehow don't look as they should.  However, I'll keep working on it 'til I get it more or less right, or see a better condition copy elsewhere.  I've also started to carefully paint out the red 'bleed-through' on the internal pages.  So, not perfect by any means, but better than it was, eh? 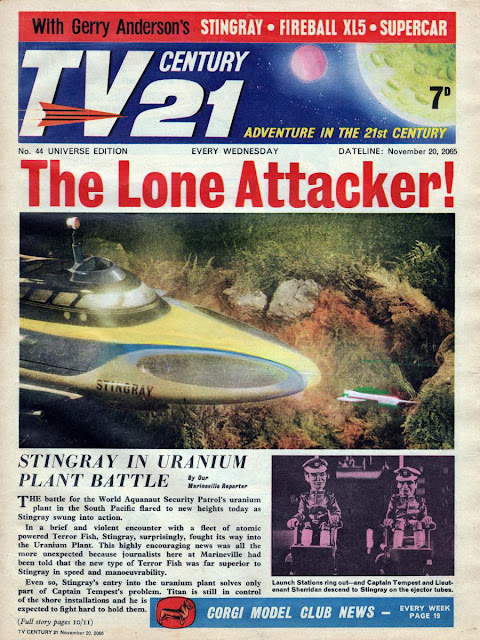 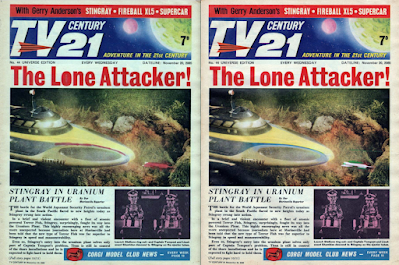 For £20 each your darn tooting he's outta order. That's an outrageous price imho for a weekly comic in that condition they's not awful but not worth £20 and I would personally send them all back Kid.

I had a similar situation years ago with a so called "5 star" seller on one of those items you bid for. I only lost £7 ( the offer was too good to be true and think he had second thoughts ) but eBay gave me a bad review as he said he never go the money despite me complaining first I never got the comics. A few weeks later I got confirmation from the bank that my cheque was cashed but I was overseas working at that time and had no time to get back to ebay .Anyway since then I have never been back on eBay and never will

I'm on a bit of a mission just now to complete the first year's worth of TV21, McS, and with only one issue now to go, I'd rather have the comics than the money, otherwise I would've returned them as a result of the seller's attitude. Had he been a decent kind of bloke, he'd have considered my goodwill towards him worth a few quid and handed it over, but he's obviously a bit of a money-grubber. It's more the principle with me than the money, otherwise I'd have wanted more, but when a seller makes the gesture for a comic not quite being in the condition described by giving a small partial refund, then it's that acknowledgement of the oversight that's more important to me.

I've had a go at lessening the offending marks, so I'll scan the cover and add it to the post shortly.

Kid, have you heard the news that Jodie Whittaker is leaving Dr. Who next year?

No, don't usually pay attention to anything concerning her, CJ. Shame she can't leave THIS year. The BBC won't want to admit defeat though - they'll probably give the role to another daft burd.

I too collect old comics but digital versions. It started with an ebay purchase of all the first series of TV21 on a CD. I got my money's worth for the fiver it cost me then. They're all availaable free now of course and so my collection has increased immensely. It's a great way to relive your childhood.

PS I thought Jodie Whittaker was a good DR WhO. It was her choice of companions which ruined it.

I've got the complete data disc of TV21, DW, but that was only ever a stopgap for me and to provide me access to images for the blog until I tracked down 'real' issues of the comic. I much prefer reading comics on paper to reading them on a computer screen. They should've made Bradley Walsh the Doctor - he'd have been better than Nurse Whittaker.

Marc Warren would be a good Doctor Who.

I'd still like to see David Bradley as the first Doctor, DS, even though he's getting on a bit now.