THROUGH THE HEAVENS' MIGHTY RAGE...

Supercar is the earliest Gerry Anderson puppet show I remember seeing back in the early '60s.  If I saw any of his previous programmes, time has dimmed the memory of watching them almost to the point of amnesia.  (Love the theme tune, along with Fireball XL5 and Stingray.)  I never had any of the Supercar Annuals when I was younger, though I think they're contained in a PDF on my boxed set of DVDs.  Whether they are or not though, I always prefer to have the actual items themselves, as opposed to mere digital reproductions, and that's why I recently bought the very first Supercar book.

It arrived today, and I was surprised to see that it was smaller and thinner than expected, as I'd thought it would be of the same dimensions as the four Fireball XL5 Annuals by the same publisher (Collins).  However, it's in excellent condition, was inexpensive, and having it now, I feel like I've returned to 1961/'62 and 'expanded' my childhood by fitting in something I never owned at the time, but would surely have wanted had I known about it back then.  Now, through the power of imagination and suggestion, it feels as though it's part of my memories stretching all the way back to when the show was on TV.

The cover and interior art is by Brian Lewis, and the stories are written by Sylvia Anderson.  There were at least three Annuals in all, which are all currently available on ebay, though none of the remaining ones are in a condition which is acceptable to me, so I'll be giving them a miss for now.  If they ever turn up in better shape, I'll probably add them to my collection.  Anyway, if you're of a certain 'vintage', I thought you might like to see my most recent acquisition.  Amazing to think that this book first appeared 60 years ago.

If you had this Annual as a kid, please share your memories of it with the rest of us in the comments section - if you'd be so good.

The middle page below, with circular 'panels' containing the characters' names and faces is similar to the splash page of The Fantastic Four #1.  Sylvia Anderson and Stan Lee knew one another later on in life, so it's an interesting coincidence that the same idea was used in both debut strips, though it's unclear whether Stan or Jack Kirby was responsible for deciding on the 'introductory' spheres in the FF's first issue.  It's also interesting to note the similarity (in concept) between Captain Scarlet's Cloudbase and S.H.I.E.L.D.'s Heli-carrier - was one a rip-off of the other (and if so, which one), or just a coincidence? 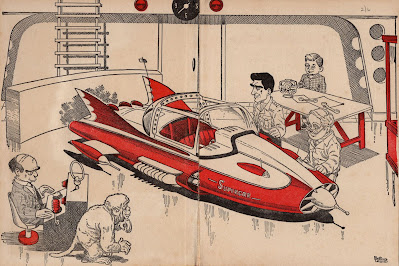 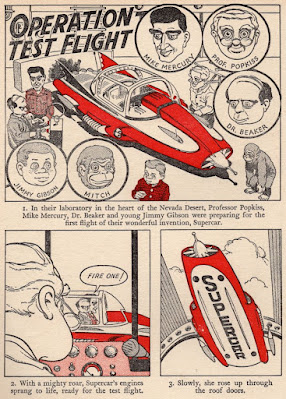 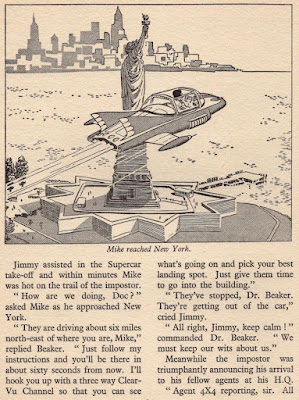 Thought you might like to see the seller's photos compared to my own after I gave the spine a colour touch-up (oo-er, missus) with acrylic ink which I mixed to match the original.
Incidentally, the line you can see on the spine in the first photo below is the reflection of the flash, not a colour crease.

Click on below to hear both versions of the Supercar theme.

A few years ago SFX magazine reviewed a DVD release of Supercar and they said that the Mike Mercury puppet looked rather like Prince Charles. I wouldn't know as I've never seen Supercar.

I'd say that Charles looks absolutely nothing like Mike, CJ, so SFX are talking out of their @rse.

You've led such a sheltered life, haven't you? Far too many things you've never seen or heard of.

They must have repeated Supercar on the TV in the UK as in 1962 I would only have been 2 or 3 years old (depending on the month it appeared) yet it is one of my first (albeit very vague) TV memories. I used to have a Supercar toy so it must have made an impression on me but after I was 2 or 3 years old (doubt I would remember too much at that age).

Mike Mercury certainly didn't look like Prince Charles, although the puppet was good for its time it was pretty ugly puppet, (not that Charles is a braw chookie)but he does remind me of someone but I cant think who. I will need to check the Supercar theme tune as I cant recall it (I loved the Fireball XL5 theme tune though)

I think most of these shows for kids were practically on a continuous loop back then, McS, as I can hardly remember a time when they weren't on TV. Supercar was certainly being shown when Fireball XL5 was on TV, though like you say, it would've been a repeat - though an early one not long after its first run.

There are two versions of the Supercar theme, the 'strident' one of the first series, and the 'softer' one of the second series, where 'stormy rage' was changed to 'mighty rage'. I've got the Supercar and Fireball soundtrack CDs, and aim on getting the Thunderbirds one next.

You feature lots of things which I'm too young to remember, Kid! Supercar was broadcast before I was even born. But of course I learn things by reading Crivens :)

Ah, but you're forgetting that it was repeated for years afterwards, CJ. Frankenstein was made in 1931, decades before I was born, but I still know about it because I caught a repeat of it on telly. So I'm afraid not being born isn't a sufficient enough excuse. And everybody learns things by reading Crivens - even me.

Kid, you're right that "I wasn't born" is no excuse but Frankenstein is rather more famous than Supercar. You say that Supercar was repeated for years afterwards but I never saw any of those repeats. My earliest memories go back to about 1970/71 so if Supercar was repeated in the mid to late '60s I won't remember it!

The book may be more famous, CJ, but you'd be amazed how many people in their 30s and older aren't familiar with the 1931 movie - or Supercar. I once had a brief 'romantic' liaison with a 29 year old female (when I was 40) and she'd only heard of Bela Lugosi (Dracula) 'cos his name was mentioned in a song. She didn't know who he was though. She was ignorant of old movies, old film stars, etc., and just about anything going back more than 20 year. As I'm sure McS will testify, when we were kids, we knew all about those sort of things - mainly 'cos back then there was usually only one telly in the house and kids watched what their parents watched. That way, we knew what they knew.

Yes, and in the '70s the BBC regularly showed those old black & white films as well as Laurel & Hardy, Harold Lloyd etc. They were a joy to watch and it's so sad they've been forgotten. Apparently young people nowadays refuse to watch anything made in black & white.

Their loss, CJ. I don't understand it, 'cos there are loads of old b&w movies and TV shows that are absolute classics, and not being in colour doesn't detract from their greatness in the slightest.

I grew up with Stingray and then fell in love with Captain Scarlet. It was only as an adult some relatively few years ago that I got to finally see Thunderbirds, Fireball XL5 and then Supercar. Although Supercar was the least sophisticated in many ways, I really enjoyed it much more than I expected.

It's an okay wee show, RJ, but it's definitely the car that's the star. I don't recall any particular episode (even though I watched some of them a few years back on DVD), but I absolutely love the theme tune.

I had one of the supercar annuals when I was a kid. Can only remember the cover vaguely.Pretty much the same as yours but a grey blue background. It was given away without my permission which would have been No!. The excuse being you are too old for that now. Quoting Queen Victoria. I was not impressed!!!!

Or even amused, as ol' Viccie is reputed to have said, LH. The covers on the two remaining Supercar Annuals were actually better than on the first one, and once good condition copies appear on ebay, I'll be having them. (The ones listed on there now have no spines.)