POST FROM THE PAST: FREAKY FRANKIE FIGURE IS FINALLY FOUND - NOT FAR OFF FORTY FLIPPIN' YEARS AFTER THE FACT...

Look at the above ad, published on the back of various DC comicbooks in the early 1970s.  I'd have first seen this around '71 or early '72, and so impressed was I with the idea of a pocket-sized FRANKENSTEIN that I customized an old MAJOR MATT MASON figure to fit the role.  First, I cut up a black polythene bag to make a sombre suit, and then used a BIC biro to administer some scars and the familiar Frankie fringe.  In his black outfit and complement of facial dis-figurements, ol' Matt cut quite a dash as a suitable stand-in for Boris. 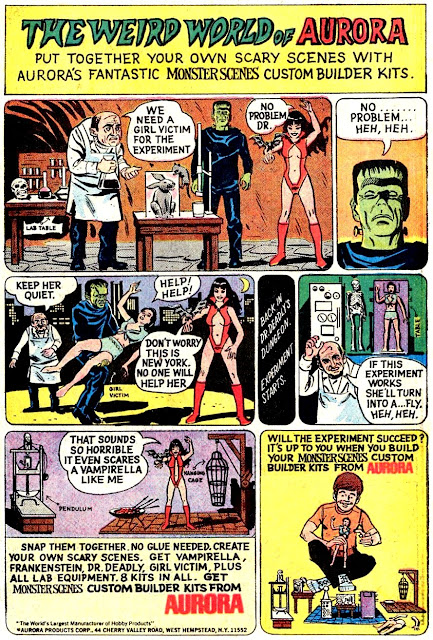 However, it was the second ad (above) that prompted me to scour the back streets of BLACKPOOL (in '73 or '74) in a vain search for this elusive figure.  British holiday resorts were great places for being able to obtain obscure items that never seemed to reach other parts of the U.K.  I'd been able to buy pristine condition copies of various MARVEL mags (FF and SILVER SURFER) from the 1960s, straight off the spinner-racks in newsagents at cover price (this was in '73 or '74, remember), so it was hardly outwith the bounds of possibility that older toys and model kits were likewise available from the same outlets.  (And some were.) 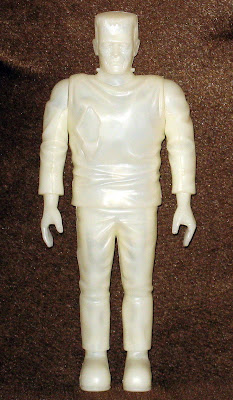 Sadly, in the case of this particular Frankie kit, it was not to be, and I had to wait nearly 40 years until MOEBIUS reissued this model (a couple or so *good many* years back now) to finally get my hands on this collectors' item classic.  Guess what though?  Not too long after acquiring this figure, an original AURORA one found its way into my possession, a gift from a generous benefactor.  Guess it must be true what they say - "All things come to he who waits." 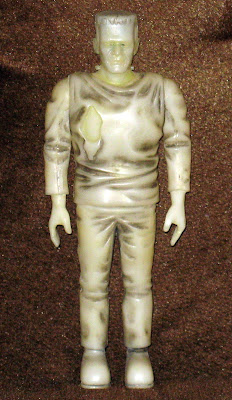 I certainly hope so.  You see, the sensational SALMA HAYEK is also on my wants-list of coveted prizes, and it surely can't hurt to be optimistic.
Posted by Kid at Tuesday, July 20, 2021

I believe that I first saw the above comic-strip ad page in Batman #236 around September 1971 and was immediately taken with the curvaceous Vampirella. Reading that page now, it seems like the story is aimed at nascent bondage enthusiasts, sadists and potential abductees of unwilling females. Even the black humour of Vampirella's comment "Don't worry - no-one will help her. This is New York" echoes the Kitty Genovese murder of a few years earlier. What were they thinking???? Didn't the comics code exist to stop that kind of thing??
Still, I bet it was a brilliant kit. Did the full set of Vampirella, Dr Evil and Girl Victim ever make it to model shops in the UK?

I believe they did, B, though I don't personally recall seeing them anywhere at the time. When Moebious reissued them a number of years ago, they were certainly available in some UK model and comics shops.

Apparently, when Aurora released their first set of monster kits in the '60s, they had psychologists do tests, who then pronounced that the monster kits (including the guillotine) were beneficial to a child's psyche, because when the macabre is reduced to the level of a mere plaything, it becomes non-scary and therefore harmless.