THE DAY THE LEGENDARY BOB HOPE TURNED UP ON MY DOORSTEP...

You'll know already, of course (because I've told you before), that I was fortunate enough to meet Bob Hope in person on two occasions ten years apart.  I met him before his gig in Edinburgh in 1984, and again, after his show in Glasgow in 1994.  (Even got my photo taken with him on the second occasion, but I've shown it a few times so I'll spare you a repeat.)  Both times I got his autograph, and was also the grateful recipient of two separate personally autographed photos he was kind enough to send me.

Well, guess what?  Today, not a word of a lie, Bob popped in to say hello to me and he's decided to stay.  Okay, I know he died back in 2003, but today there was a knock at my door, and when I opened it, there was Bob on the doorstep.  Admittedly, he was in a cardboard box and he was only 12 inches tall, but it was definitely Bob, even though he was made of plastic and dressed to perform at one of his overseas gigs for American servicemen. 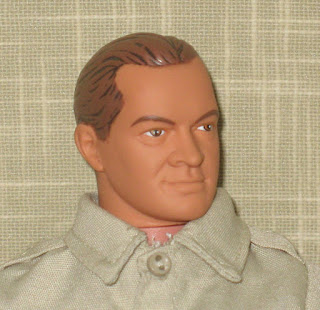 One drawback is that, although the box had never been opened, when I carefully took the figure out for examination, the 'skin' covering the fabric of his jacket crumpled and cracked on contact and it probably won't be long before bits start falling off.  Not the seller's fault that the manufacturer decided to use a fabric that wouldn't last, and he's kindly offered me a partial refund to compensate me.  I've already ordered a replacement jacket from ebay, which, although it's not an exact match, will mean I can display the figure fully attired.

It's a really good likeness, though I'm typing this before I've taken photos to accompany the post, so I'm hoping they do it justice.  If not, take my word for it, he's instantly recognisable.  Now I'm going to contact the manufacturer and see if I can get a replacement jacket from them.  Doesn't hurt to ask, eh? 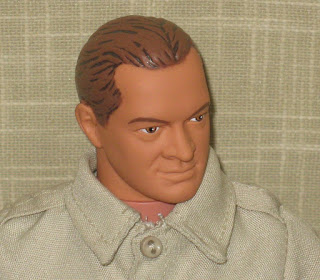 Below, cribbed from the Internet, is a piccie of Bob in his bomber jacket. 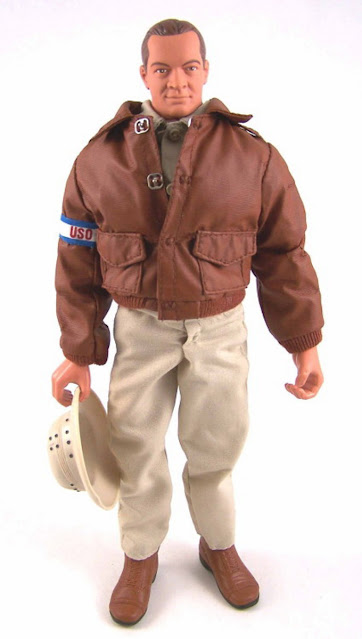 And below are three of the seller's photos of the actual figure I purchased, so that you can see what the box looks like. 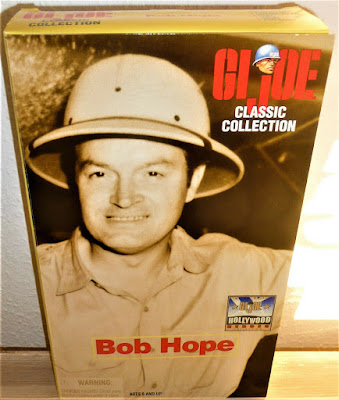 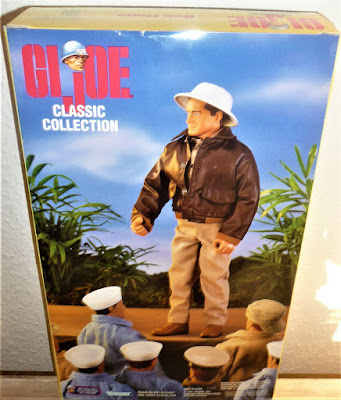 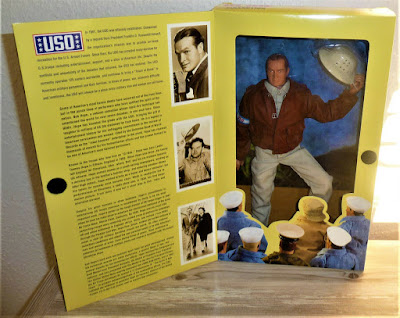 A Bob Hope action figure? I wasn't expecting that!

Luckily I was, otherwise I might not have been in.

Strange item - did the box have Bob Hopes name on it?

Oh yeah, it was sold as Bob Hope, McS. I'll add a pic of the box so that you can see what it looks like.

Excellent stuff Kid, the box is really cool. Thank you for showing it.

I live to serve, McS. (Serving 10 years at the moment for a criminal offence - this blog. Ho ho.)

Now all you need is a Bing Crosby action figure and you'll have your own "Road To..." scene.

Nah, CJ, what I want is a Jane Russell action figure - then I can re-enact The Paleface and Son Of Paleface.

Hey! I saw Bob in concert in 1977 in London ( didn’t get to meet him). I should say doing a stand up set because it wasn’t really a concert.
I got one of those GI joe’s for my son, it’s a really cool HALO skydiver with a working parachute. We opened it and played with it’s no longer mint. Don’t care. It’s a cool toy.

I can live with things not being absolutely pristine, PS (though I prefer if they are), it's when they start falling to bits that I begin to mind. The bomber jacket on the Hope figure looked okay, but the merest touch and it started to crumble. Cheap fabric. I must have well over 70 action figures now, and I'm running out of space.