I remember the day well.  It was a sunny afternoon sometime in 1981 and I was in Glasgow with a visiting pal, up from where he now lived in England to see his in-laws who yet resided in my home town.  So while his wife spent time with her parents, me and Bob Billens (name changed, though it was a double 'B') nipped into the 'dear green place' for a jaunt.  Bob had worked as a summer assistant in my town's central library when I was a full-time employee there in 1979, and that's how we'd met.  He, like myself, was also a comics geek, though he preferred DC to Marvel. 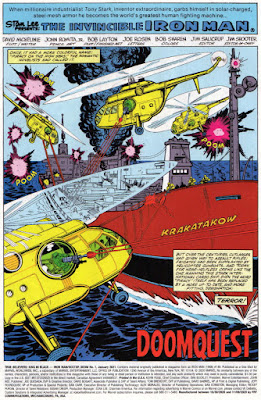 Anyway, we were near Howard Street, so I directed Bob's attention to a huge board I'd fairly recently signwritten which adorned the side of a building close by.  Then we nipped into a newsagent's opposite and I bought The Invincible Iron Man #150, which I still have to this very day.  Now, 40 years on, I finally got the chance to read the issue that preceded it when the above True Believers reprint of #149 popped through my letterbox this morning.  I suppose it's fitting that the two issues involve time travel, as my mind returned 40 years into the past to the day that two pals with the same pastime enjoyed a carefree saunter 'round the city for a couple of hours. 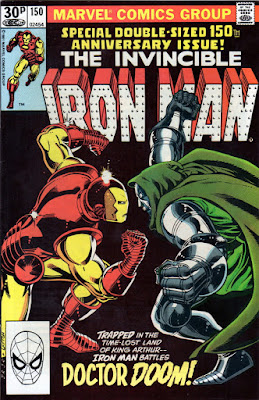 A mere 5 or 6 years later, Bob apparently decided that our long-distance friendship was surplus to his requirements, presumably having made so many new pals in England that he considered the effort of maintaining contact with me an unnecessary exercise, so he simply stopped keeping in touch.  He'd become a bit of a social climber, like Bob Ferris in the TV show Whatever Happened To The Likely Lads, and I think he'd come to regard me as the Scottish version of Terry Collier and therefore a bit of an embarrassment to his imagined new status down south. 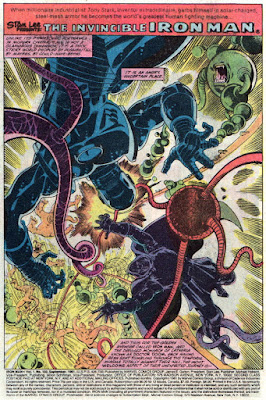 So, sadly, turned into a bit of a pr*ck, did Bob, but, regardless, I can't help but smile fondly at the memory of our friendship, before it finally faded like the colours of a parted petal, bleached by the radiating rays of the summer sun.  But enough of such sentimental b*ll*cks - if you see this mag on sale anywhere, grab it while you can.  It's been out for a month or more, but it's well-worth having.  Meanwhile, having read #149, I'm now off to re-read #150, so that I can immerse myself in the 2 part story in sequential order - almost 40 years after the fact.

I can't remember if I had Iron Man #149 but I definitely bought Iron Man #150. A few months later there was also a What If story called "What If Iron Man Had Been Trapped In The Time Of King Arthur" in which only Dr Doom returns to the 20th Century. At the end of the story King Arthur is killed in battle and Iron Man is crowned "King Anthony Of Britain". The same issue of What If also featured a story called "What If Dazzler Had Become The Herald Of Galactus?" - I rarely bought What If (in fact, I hardly ever saw it on sale) but I did own this particular issue featuring Iron Man and Dazzler.

Sounds interesting, CJ - if I ever see it at a reasonable price, I may add it to my collection. I've got a few issues of What If?, but I didn't buy the title regularly - only when the issue looked interesting. Like you, I seldom saw it on sale so maybe it was a popular mag that simply flew off the shelves?

I think I remember that What If. I had most of the first series of those - fun series.

Iron Man 150 was one of the first comics I ever got. Perfect intro to the character/ Marvel in general. (My older brother bought comics for about a year before I ever did so I remember all those old great covers leading up to it, including 149, but IM #150 was my first.)

Another first comic? Daredevil 171. Good time to be getting into comics!

I was so excited by the sequel in Iron Man #250, then so disappointed by how it turned out. They really should make a movie based exclusively on 150. Perhaps when they introduce Doom to the MCU, if they ever do.

I had a quick look at #250 when I had #150 out for scanning, BMc, and I noticed it was set in the future - though the first 3 pages (at least) were modelled after the layout in #150. I remember thinking it was a nice touch at the time and a neat nod back to 150 (which seemed to be the distant past when 250 hit the stands), but I'll have to re-read it to remind myself as to whether I enjoyed it or not. Strange to think that both comics belong to another century.

Kid, the next Epic Conan collection is out on March 10th (well, that's the date of the e-book release so I assume the physical book is out at the same time).

Ta, CJ. I'll likely buy it at some stage, even though it probably only contains the second half of the first Omnibus volume, which I already have. However, there's something very enticing about those Epic Collections.

I bought Iron Man 150 one summer afternoon from a second hand bookshop in 1987ish, and it quickly became a favourite of mine. Loved it- David Michelinie, I always feel, is an overlooked writer. Both of his Iron Man runs are great and he later wrote some very entertaining Spider-Man stuff.

Yeah, his name doesn't immediately remind me of any great classic tales he wrote, but it's one that's instantly recognisable - and his stories were usually entertaining. Job done really.

Never read Iron Man until just a few issues prior, but I absolutely loved the Doomquest arc. I really enjoyed everything about the series at that point. I was never a big fan of Iron Man's until this run (he always seemed like a twit in the Avengers). He and Doom matched up pretty well.

I must admit I liked the early Iron Man tales, G, but I also enjoyed the mag in the '70s and '80s. I also liked it when Byrne was writing it, but haven't bought an issue in years (excepting back issues or reprints) because I just don't know what the character's continuity is any more. I wish Marvel would stop changing things all the time.

A couple of months after this issue, one of the first Iron Man comics (and I think the first back issue) I ever bought was published: Iron Man 152, the debut of the gorgeous stealth armour and still, all these years later, an all-time favourite.

I can't remember whether I've got that ish or not, DS, but it sounds familiar. I'll check at a later date.