Let me set the scene.  The time: towards the end of 1972.  The place: W. & R. Holmes, one of the finest bookshops, stationers, tobacconists, toyshops, and art stores that I've ever known.  Possibly even the finest, though that may merely be nostalgic sentiment for a long-vanished aspect of my youth influencing my retrospective appraisal.  On a table in this magnificent establishment, laid out in all their finery, was a display of books - among them Superman From The '30s To The '70s and Batman From The '30s To The '70s.  (I've taken the liberty of placing the apostrophes in the correct place.)

Whenever I was in the shop, I would pore over every page of this pair of inch-thick (or more) publications, drinking in the artwork and colour covers reprinted within, and the moment I could afford to, I bought the Superman volume.  Curiously, I wasn't consumed with quite the same compulsion to acquire the Batman companion volume, though doubtless I'd have purchased it had finances more readily allowed.  It wasn't until 1979 that I bought the second printing of the Batman opus - along with the Superman one (both bought from John Menzies), as, foolishly, I hadn't kept any of the several copies I'd bought at the time.

And that last sentence perhaps requires a bit of explanation.  You see, I loved my books to be perfect, and if ever I inadvertently soiled a page with the merest hint of a fingerprint or the vague suggestion of a crease or bent corner, I had to buy a new, unblemished one.  One of my brother's visiting friends picked up my Supes volume to read one evening while eating toast, leaving several pages covered in greasy finger marks and resulting in me having to buy a new copy at the earliest opportunity.  I must have bought three or four of them at least within the space of a very short time.  Never held on to even one of them though.

Towards the end of 1982, I used my library connections (though I'd left their employ two or three years before) to get both 1979 softcover editions hardbound.  This was because the 'laminate' on the covers had started to crack and peel along the indented fold where the books opened, so remedial action needed to be taken - even though the original covers were discarded in the process.  Many years later I was able to acquire a pair of the 1972 Spring/Hamlyn printings, but still my appetite for them remained unsatiated.  Eventually I also obtained the 'sequel' to the Superman volume, entitled (wait for it) Superman From The '30s To The '80s - a nice US hardback copy to complement my UK softback '70s one. 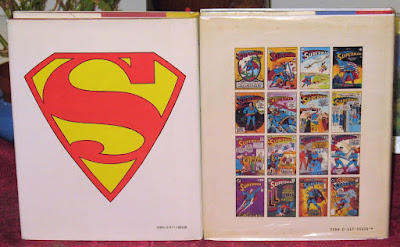 Interestingly, these books had late '80s equivalents to celebrate 50 years of Superman and Batman, called The Greatest Superman Stories Ever Told and - well, if you can't make an educated guess at the name of the other one, you shouldn't be allowed out on your own.  The advantage of those new collections was that they were in full colour and, a few stories aside in the Superman volume, didn't repeat the contents of the '70s collections.  In fact, going from memory, I don't think the Batman book repeated any of the contents of the earlier version, with the exception of a couple or so cover images.  It's a shame that the earlier books weren't in full colour throughout as opposed to just a few sections, but perhaps at the time the costs would have been prohibitive.

And now to the point.  (Yes, surprisingly there actually is one.)  A couple of days ago, a 1978/'79 US hardback copy of the first volume, exactly the same dimensions as its '80s counterpart, arrived from America at Castel Crivens.  The '80s edition jettisoned some stories and included others, and to be honest, is probably a better representative example of Superman tales over the decades, but there's something about the earlier '70s cover that I prefer.  The pair look good together in their matching sizes, and who knows, I may even think about getting a hardback of the Batman book.

First though, what I'll probably do is scan the dustjacket of the Superman tome and create a duplicate for my '79 printing, just to enhance its visual appeal.  When I've done that, I'll see about scanning the cover to the first edition of the Batman softback and creating a dustjacket for my '79 second printing of it.  No doubt you'll all be filled with a sense of undying gratitude when I tell you that you'll be able to see the results of my handiwork right here on Crivens, so panic not - you won't miss a thing.

In the meantime, feast your eyes on the covers of these two beauties.  And if anyone knows whether there was a Batman From The '30s To The '80s companion volume, be sure to tell me, eh?  If it exists, I quite fancy adding it to my collection.  And I know what you're thinking - that's a helluva lot of words just to show us a couple of covers!  True, but it was worth it, wasn't it?  H'mm, now where did everyone go? 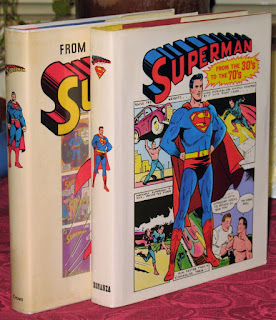