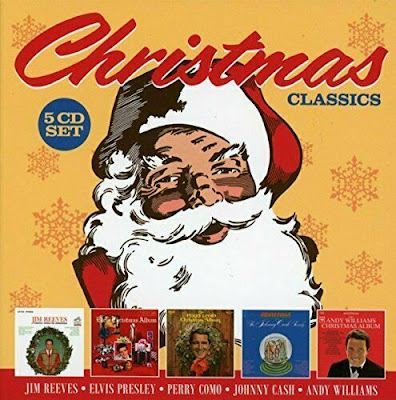 I'm a sucker for the Jim Reeves Christmas album; I forget precisely how many copies of it I've got, but it must be around at least a dozen.  And that's only counting it in its original form (12 Songs Of Christmas), not the Christmas Songbook version which includes the original 12 tracks along with a selection of Jim's religious tunes, or compilation boxed sets which also include the Christmas songs.  I've got it in LPs, cassettes, and CDs, and I don't really need any more, but I just can't seem to stop buying it.

I got a remastered version released last year, and saw a CD on ebay around a week or so back that was like a mini LP, in that it came in a cardboard sleeve (no case) which was a facsimile of the original cover.  Well, I just had to buy it, didn't I?  That cost me £11.50 plus £1.65 p&p, but it looks and sounds great.  It was part of a 5 CD box set (the seller split them to sell separately) which contains the Christmas albums of Elvis Presley, Perry Como, Johnny Cash and Andy Williams, most of which (the exception being Johnny Cash) I already own on vinyl and CD.

Guess what?  Then I saw the box set itself, factory sealed, on sale for £5.99, p&p free - so I bought that as well.  What a bargain!  Anyway, in case you're interested in obtaining a copy for yourself (if you can find one) for the end of this coming December, I've included a couple of photos to show you what it looks like (cribbed from the Internet).  Note that Jim Reeves heads the pack, as his album is, in my view, the best of the bunch.  (Which is only to be expected, given that he was the greatest balladeer of the 20th century.) 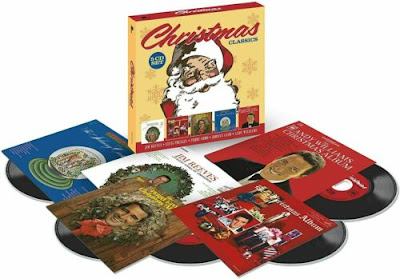 Kid, you've answered my recent question. I asked what you'd do when you had re-acquired everything from your childhood - wouldn't life be dull without those regular postal deliveries? But the solution is that you'll keep on buying multiple copies to infinity!

To infinity - and beyond! Except that I didn't have the JR Christmas album when I was a kid, CJ, and I'm not really re-acquiring it, because I still have my original LP from when I first bought it.