"All things come to he who waits" runs the old saying - or something pretty close to it.  And it's right, 'cos I've just this minute purchased the comic wherein I originally saw 'The Man Who Outdistanced Death!' back around the mid or late '60s.  I managed to acquire a colour reprint of the story two or three years back, but I just had to have the b&w one I'd originally read as a kid.
Surprisingly, for a self-proclaimed 'Adult Comic', they've toned down the skeletal figure of Death on the cover, and also adjusted the 'first' page of the story to avoid repeating the cover image inside.  However, rather than describe it all in my usual tedious, long-winded way, I'll just show the cover and splash page as they originally looked when first published.
Well, that's another one soon to rejoin the throng.  At this rate, it won't be long before I have just about everything I recall from childhood back in my possession. 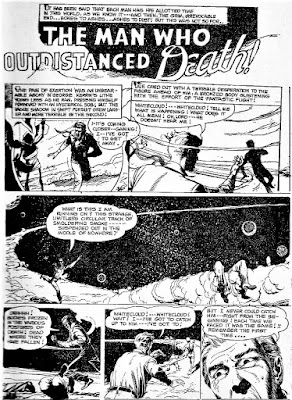 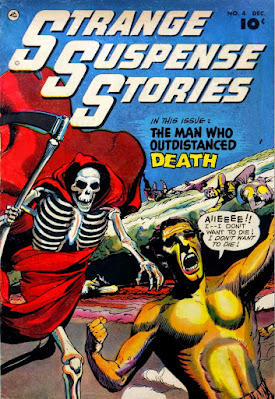 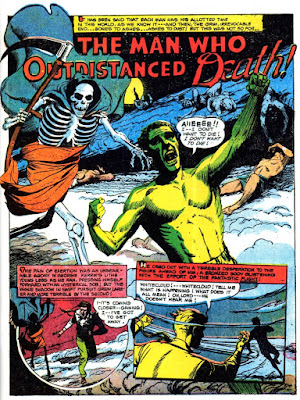 So what will you do, Kid, when you've re-acquired everything from your childhood? Life will get very boring without those regular deliveries from the postman!

Don't worry, CJ, he'll still be kept busy delivering all that heroin and stuff that I get posted to me from abroad.

Have you obtained a copy of the Black Knight Facsimile edition yet, Kid?

Mine arrived this morning, and what a thing of beauty it is. Joe Maneely's art is stunning. Looking forward to reading it properly later!

I have, DS, and was intending to do a post on it earlier today, but got distracted by other things. Will publish it shortly (I hope).