Before Marvel there was Atlas (and before Atlas, Timely), so it's nice to see an Atlas Facsimile Edition in the shape of The Black Knight #1, illustrated by Joe Maneely, who was Stan Lee's pal and favourite artist when the two worked together back in the '50s.  Unfortunately Joe was killed in an accident while still relatively young (32), and we therefore never got to see what he might've done with the Marvel Age of heroes.  Had there even been one that is, as Jack Kirby was a major force in what was yet to come, and had Joe Maneely lived, it might never have seen the light of day.

Stan was under instructions from Martin Goodman to create a superhero group in the wake of DC's hit mag, Justice League Of America, so The Fantastic Four in some form or other would probably still have appeared, but who the members were, what they were called, and a whole host of other factors, may have been entirely different and not quite the success of the Lee & Kirby version.  If it hadn't been, it's entirely doubtful that there would've been The Hulk, Spider-Man, Thor, etc. 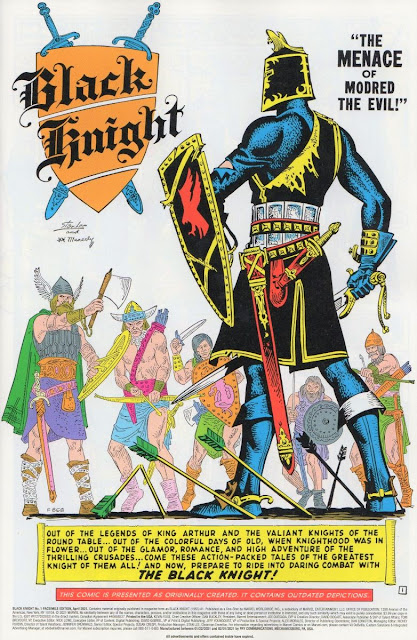 Stan Lee is quoted as saying that had Maneely not died, he (Stan) would most likely have given the FF to him to draw, but I think Stan is going overboard in trying to honour his pal's memory and artistic talent.  That's a common trait of Stan's - to bestow credit on his collaborators to the 'nth' degree.  (Ironic then, that he's accused of not giving enough by his often rabid band of detractors.)

Joe was reputedly an extremely fast artist (probably faster than Jack according to Stan, but there's no way to confirm that at this late stage) who had a nice, intricate and ornate yet easy-on-the-eye illustrative style that told the story perfectly adequately.  However, he didn't possess the dynamism or the raw power that Jack did in bringing a page to life, and looking at this reprint of The Black Knight, his shortcomings are all too obvious when considering him as a possible alternative co-creator of the mighty Marvel Universe. 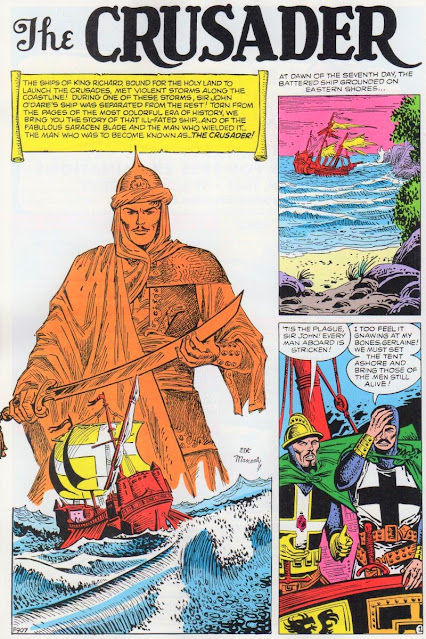 His layouts are rather 'staid' and repetitive, and - were you to equate his storytelling abilities to that of a movie - give the impression that everything was shot from the same eyelevel as the 'actors', performing directly in front of the camera.  There isn't the variety of panel composition, or figure foreshortening that Kirby was capable of, and while nicely drawn, Maneely's art is more like the equivalent of a measured trot (occasionally rising to a canter) as opposed to Kirby's frenetic gallop.

Look at the first splash page.  There's almost an extra foot of body in the waist area of the Black Knight's figure, and I see that Joe repeats this tendency to elongate torsos throughout the mag.  A lot of his panels have a 'flatness' to them, and don't possess that almost 3D effect that Jack's panels have.  Often, Jack's figures appeared to be jumping off the page at the reader, whereas Joe's figures are all too clearly confined within the panel borders.  A Lee/Maneely FF would've been an entirely different animal to the Lee/Kirby one we're familiar with, and I suspect it would've pretty soon faded into limbo and not been the precursor of the avalanche of Marvel heroes back in the '60s. 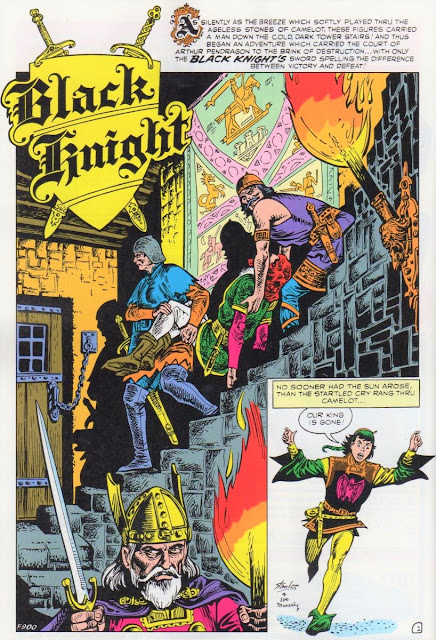 So, summing up, Joe Maneely was a competent, professional artist who drew nice pictures that served their purpose, but his art just didn't have the raw, raging power required to kickstart and maintain the momentum of the Marvel Comics Group.  You may disagree, but if so, then I suspect that you're seeing something that I don't - something that isn't actually there in fact.

However, Maneely  certainly wasn't a bad artist, and I heartily recommend this comic to those who'd like to see what Marvel might've been like had Jack Kirby not been part of the equation that helped birth the 'House Of Ideas'.  And also just on its own merits, as an entry into a vanished age when comics were exciting fun.  Grab it while you can.

Yes, he's more like John Severin in inking style, PS, but without the same 'drama' as in Severin's art.

I can see why Stan Lee liked Joe Maneely so much very nice art, BUT AS Phil says its more akin to newspaper style of the time such as Prince Valliant. Even although it looks a bit staid to todays eyes at the time I’m sure this would have looked quit modern and exciting . As talented and as quick an artist as Mr Maneely was I don’t think he had the creative mind Jack Kirby had (to be fair did anyone have the comic book creativity of Kirby) to produce / create /co create the plethora of characters that Jack did. From the little I know of Maneely I don’t think he drew very many superhero comics, so he may not have flourished at Marvel, but it would have been nice to see his work on Capt America etc.. Didn’t he and Ditko work together at Atlas anyway, if so at least Ditko Im sure he would have continued to co create Spiderman etc even if Maneely hadn’t passed died so tragically and so young. I think John Romita may also have been at Atlas at this time (didn’t he draw Capt America or was that at Timely?). Regardless he certainly was a very talented artist, so it is nice to see his art is still appreciated in this facsimile

Romita did draw Captain America, McS, but off the top of my head, I can't recall whether the company was calling itself Timely or Atlas at the time - and I'm far too lazy to Google it. My problem with Maneely's art is that, good as it undoubtedly was, I just can't envisage The Fantastic Four Or The Hulk (for example) being drawn in his style, and if they had been, I doubt they'd have been the hits they eventually became. As you say though, it's a nice facsimile to have as a reminder of Joe Maneely's art.

I'm a big Joe Maneely fan and adore his Black Knight work. It's one of the few Masterworks that I picked up ever and I also scarfed up a copy of this recent facsimile. It's a beautiful germ of a comic. As to the Joe/Jack debate there's not much of one in my view. Maneely was a very different kind of artist, producing ornate handsome artwork not unlike what Everett was also doing during this time. But Kirby was a transformative talent. Would Maneely have become something greater with more time and opportunity? Alas we can never know.

I assume you mean 'gem', not 'germ', RJ, and you're right - it's a great wee comic. However, I think it's safe to say that, unless his style changed radically, Maneely's art just didn't have that ol' 'Jack Magic' that was so important to the birth of Marvel. Joe's panels are just too flat looking, and those extended torsos just leave me wondering 'why?' Howver, that aside, he was still good at what he did.