AT LAST - THE GENUINE ARTICLE...

One Together Is Two... 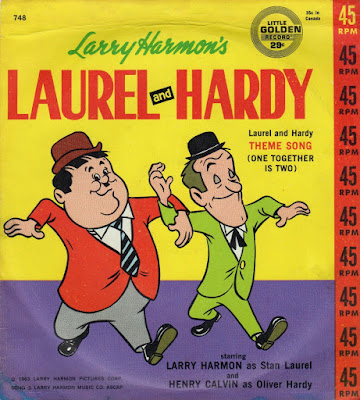 Finally!  I recently managed to obtain an original Golden Record of the Laurel & Hardy theme song from Larry Harmon's animated '60s TV show.  Regular readers may recall that I recorded the song from YouTube some months back and made my own cd to replace the single I had as a kid.  (Well, it wasn't actually 'mine' - it must've been acquired by either my father or brother, but I played it more often than them.)
There have been different versions of this record, though the content is the exact same in all of them.  I believe it was first released in America in 1963 as a 78 rpm 6 inch record (yellow vinyl), as well as in Britain by Goldentone Records (orange vinyl, also 6 inch).  At some stage, the US single also became available as a 45 rpm 7 inch single (black vinyl), which is the one pictured above.  (I scanned the sleeve with the single still in it, which is why you can see the shape of the record.)

The one I had as a kid was orange vinyl, and if it ever shows up on ebay, I'll buy it if I can, but in the meantime I'm just happy to have an 'official' recording of the song.  Actually, I probably prefer 45 rpm for a single, and the sleeve isn't radically different to the Goldentone one, so I won't be too disappointed if the original stays beyond my grasp.  One look at the cover and I'm once more on the living-room carpet, sat in front of our old cabinet record player, singing along to this humorous ditty.

Just to remind you, below is what the Goldentone one looked like, along with the cd I made for myself. 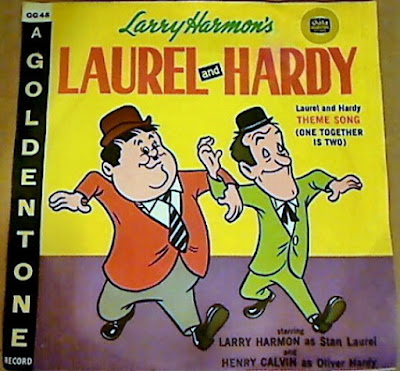 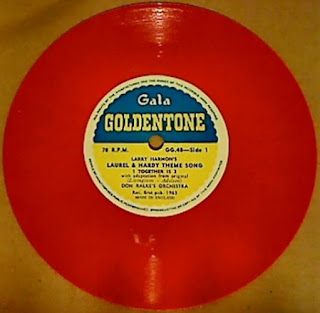 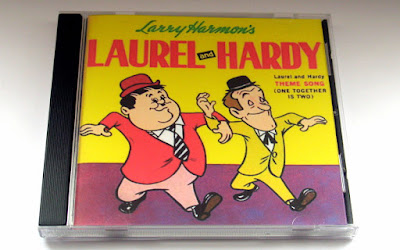 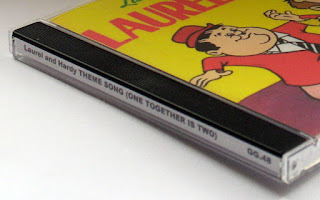 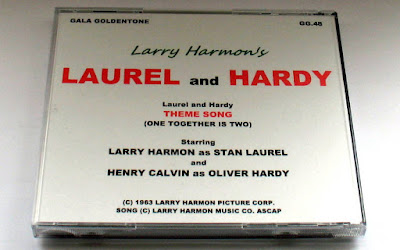 Thanks, MW, I'm well chuffed with it. Plays like a dream for something that's nearly 60 years old. (Well, it will be in 2 years.)

Did you know they supposedly have the orange one for sale on discogs? 4.40 pounds, somewhere in the uk. Believe it or not, i got one for free a couple of months ago at a local charity shop. I was lucky this summer to get a card game based on the cartoon series as well.

Thanks for that, LM, just bought it. In case there's a problem with it, would you consider selling me yours? And has your Fireball cover turned up yet? Cheers.

Bah! Just noticed that it only has a 'generic' sleeve, meaning the original one is missing. I'll have to make one for it. At least I have the record though.

I don't remember the Laurel & Hardy cartoon at all - was it shown on UK TV, Kid?

Not entirely sure, CJ - TV comic had an L&H strip clearly based on the Larry Harmon cartoon versions, so it could've been.

Kid, hi! No, the Fireball sleeve hasn't arrived yet, it usually takes about a month to get mail from overseas to us in the northwoods. I don't want to part with my record, but I'll keep a lookout for you for another one. I never knew there was a cartoon show, so I'll have to keep a eye out for that as well! My wife and i are currently watching the dvd sets of Our Gang, Laurel and Hardy, and Charley chase. If you collect comics, did you get the recent (well, within the last two years) L & H comic from AmericanMythology? And didn't L&H turn up in Judge Dredd drawn by Bolland?

I was being optimistic, LM, because I posted a magazine to America and was told it would take at least 6-8 weeks, possibly more - but it arrived about 10 days later. Nope didn't see the comic, but I remember L&H turning up in a Dredd story - drawn by Brian Bolland I think?

Any chance of me getting good quality scans of both sides of your record sleeve? If so, send me your email address (which I won't publish), then I'll send you mine and you can send me the scans, if it's not too much trouble. It's so I can make a duplicate of the Goldentone sleeve.

Thanks for that, FK. After thinking about it some more, I seem to have a vague memory of seeing it when I was younger, but perhaps I'm only imagining it.

IIRC, Gold Key published a Laurel & Hardy comic in the late 1960s that looked like it was based on the TV cartoon. Don't know offhand if the British TV comic reprinted from that, or if it was all new content.

There was also an Abbott & Costello TV cartoon at about that same time, and a Charlton comic book series based on it.

TV Comic used all-new content, TC, though based on the Larry Harmon style. If they ever did an L&H Holiday Special, they might've reprinted some US strips, as they did that with their Pink Panther Specials, which were a mix of UK and US strips.

There was a new Laurel and Hardy comic that came out in 2019 and was still going in mid 2020 that looked fun. I remember DC had a L&H comic in the early 70s based on the Harmon style (it may have been reprints)

I should say that TV Comic used all-new UK L&H content when they first published it, but thereafter they reprinted the strips for years. Anyway, think I saw the DC comic, McS, but never bought it. Glad to say I've just tracked down another UK Goldentone version of the record, with the sleeve, and bought it. It should be winging its way to me tomorrow, but will take a while to arrive as it's coming from America. Strange that I bought the US version from a UK seller and the UK version from a US seller, eh?

Hi Kid! Sorry I couldnt reply earlier, but it was a bit hectic here the last few days. Got your sleeve for Fireball, and SO MANY THANKS! I spent a half hour looking for the L & H 45 in my basement, and couldnt find it...but noticed that i had quite a few records i didnt know i had complete with sleeves. One 45 was Jimminy Cricket, cop ; a Wally Gator; and a weird one with a nicely illustrated little girl in a tutu learning how to tap dance. I finally found the L & H 45, but alas it is the same one you have, tho I now see you found the one you wanted. Now Im mystified as I KNOW i have a coloured vinyl somewhere and i wonder what that is...its a kids record, but who knows. Another search! Do you ever have problems keeping your collection organized? Any hints?

My singles collection isn't that large, LM, so I can keep them all in one box, though there's around 40-50 that I keep in an actual record box I bought back in the '70s. I'll have to get a decent storage container for them all one day, so that I can access them easily. Actually, my collection of records is probably the most organised part of everything I own - it's other items that I have difficulty finding again 'cos I've forgotten where I put them.