BOB HOPE IN HIS NEW JACKET... 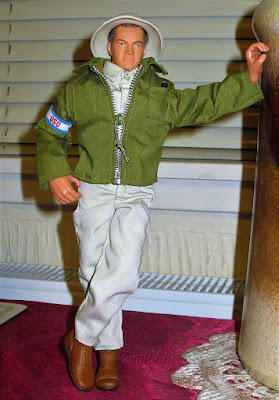 Dug through over a dozen boxes yesterday, trying to find spare outfits for my action figures - success!  So here's Bob Hope with his 'new' jacket on, seeing as how the one he arrived in started decaying the second I touched it.  (And it was in a sealed box that hadn't been opened since the figure was first produced nearly 23 years ago.)  The new jacket isn't the same as the original, but it looks the part - and at least the problem is now sorted.  Doesn't he look smart?
(Update:) Well, the jacket I ordered via ebay finally arrived (from China), but the cuffs aren't wide enough to allow the figure's hands through without probably damaging the material, which is similar to the original but of a different style and colour (black).  So my decision to use the one in the photo was a good call, even though it was only meant as a temporary measure until the new one turned up.  (It's now permanent unless I find a better one somewhere).
Posted by Kid at Sunday, February 21, 2021