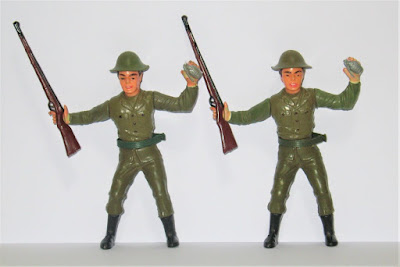 I told all you cavortin' Crivvies a few years back (two or three times actually) about a swap I made with a now former pal back when we were kids.  The pal was the guy you've seen me refer to as 'Billy Liar', and who I usually call Adam Cowie as it's close enough to his real name for those who knew him to recognise who I'm talking about.  If he saw his real name here, he's conceited (and daft) enough to regard it as a badge of honour and I want to avoid giving him that pleasure should he chance upon the site.

However, first let me set the tale in its proper context.  In the '60s, Marx Toys made a poseable Batman figure, which really wasn't very poseable.  They also made a soldier figure which was even more bereft of points of articulation, and who had the exact same face as Batman.  I had Bats, Billy/Adam had the soldier, and one night we swapped them, only for Batman to come to a sad end when an older boy maliciously decided to see if he could fly (knowing full well he couldn't) and launched him across a playing field, where poor Bats came a cropper upon crash-landing.

Billy/Adam immediately wanted to annul the swap and get his soldier back, but I pointed out to him that it wasn't going to happen as he had been Bats' owner when the toy had met its inglorious end, so he'd have to live with the consequences.  We both went 'round to the boy's house and told his mother what he'd done, but apart from saying she'd have a word with him, she clearly wasn't interested.

Anyway, just consider the above a reminder for the purpose of setting the scene for the latest development in the saga.  Obviously I'd love to be able to replace the Batman figure (I had two of them at different times as a kid), but I've never yet seen one for sale anywhere.  However, only today I took possession of two replacement soldier figures, along with quite a few accessories (not shown, apart from what they're wearing or holding).  I wasn't looking for two, one would've been enough, but they were being sold as a pair so that's how I bought them.

Okay, they're both military men, but I think I'll regard one as a soldier and the other as Batman/Bruce Wayne dressed as a soldier.  After all, the Batman toy used the exact same head.  And so another old friend from childhood rejoins the merry throng, assembled to keep me company until I finally fall off the twig in another hundred years or so.  (Think positive is my motto.) 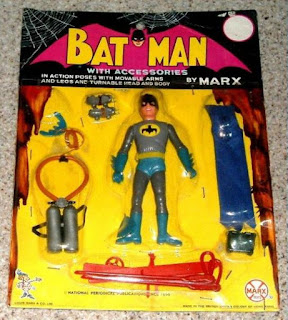 If "Adam Cowie" is close enough to your former friend's name for those who knew him to recognise it, won't he recognise it himself if he stumbles upon Crivens?

Well, obviously he would, CJ, but I didn't change his name so that he wouldn't recognise himself, but to deny him any pleasure he might derive from seeing his actual name mentioned. "Do keep up, 007."

Did you purchase the Batman Marx toy recently? Must have cost a lot . I don’t remember even seeing this.

The Batman toy is just to show Crivvies what it looks like, PS, I've never seen one for sale otherwise I'd have snapped it up. I just received the two soldiers yesterday, after buying them via ebay several days before. Exact same heads on the soldiers as on Batman/Bruce Wayne.

Did anyone else make parachutes for action figures from a plastic bag tied to the figure then folded up? It could then be thrown from a close window where the bag would open out and gently float the figure to the ground.

Btw Kid, I have some books and comics that may (or may not) be of some interest to Crivites on eBay, including an original Timely comic from 1946. Username is Davstron if anyone would line to take a look. There will be more stuff, especially comics, getting listed as I've decided to have a big clear out.

Sure did, DS. Also used to grab AM by the legs (with his parachute folded up) and throw him up in the air, then watch him float down to the ground. That was when it worked - when it didn't, he plummeted.

Davstron? Isn't that the leader of The Daleks?

Davstron/Davros? One of them is an evil megalomaniac who will stop at nothing to impose his will on the universe, the other is a wheelchair-bound scientist from Skaro.

As we all know of course, Davros exists only in an alternate universe - the true origin of The Daleks was revealed in TV Century 21.