As far as I recall (which is usually pretty far), this is the only BOB HOPE comic I've ever read.  It's certainly the only one I've ever owned, acquired sometime back in, I think, 1982.  Bob himself doesn't turn up in the tale until page 12, and seems to be merely a supporting player throughout the yarn, rather than the 'star of the show'. Illustrated by BOB OKSNER and most likely written by ARNOLD DRAKE, the story features four 'fearsome' creatures - The FRANKENSTEIN MONSTER, DRACULA, The WOLF MAN, and The MUMMY (in likeness at least, if not exactly in name).

Surprisingly, the title lasted for 109 issues over the course of 18 years, with NEAL ADAMS taking over the art chores for the final four issues.  The comic has its own charm I suppose, with some pleasing art, but to be entirely honest, I found the ads more interesting than the strip.  I've included a couple so that you can make up your own minds. What kids wouldn't have loved to own a full-sized GEMINI Spacecraft, eh?

Why I didn't take this comic with me for Bob to autograph when I first met him in 1984 (and again in '94) I'll never know.  That said, I've got his signature about 7 or 8 times, so I don't suppose there's any need to be greedy. 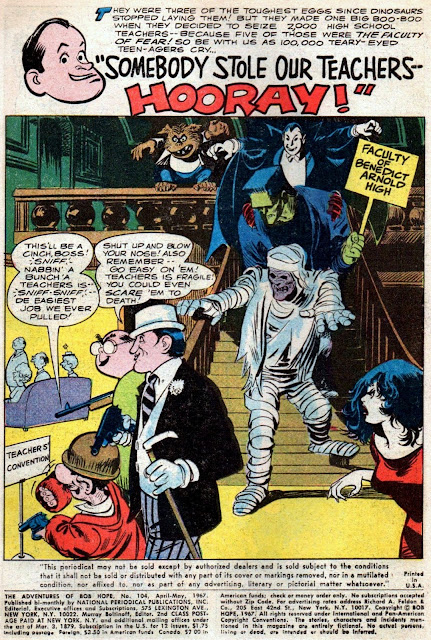 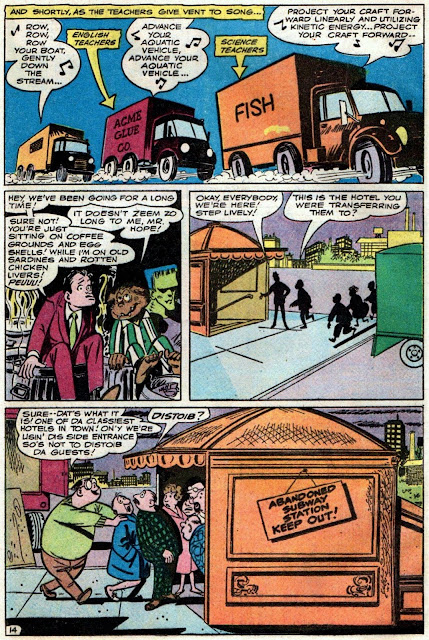 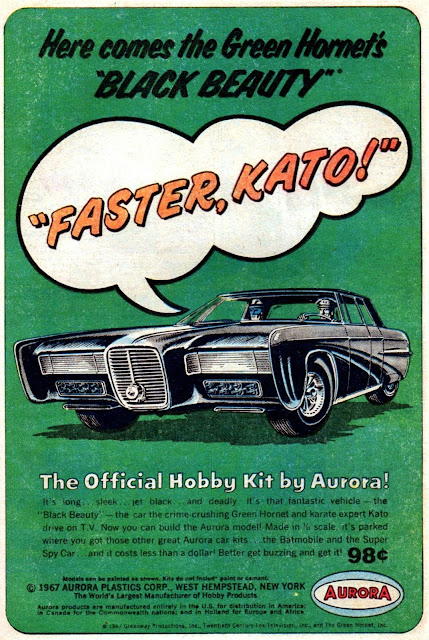 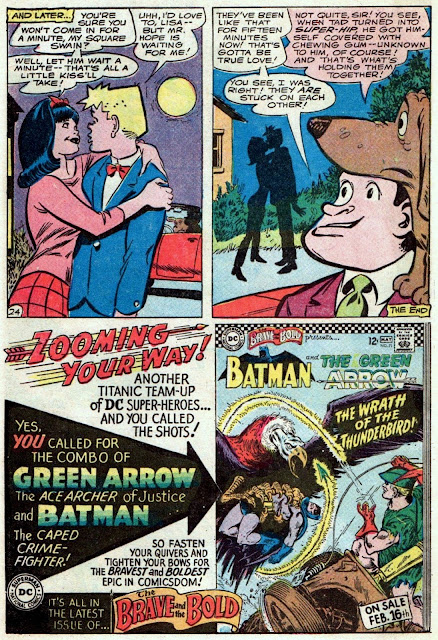 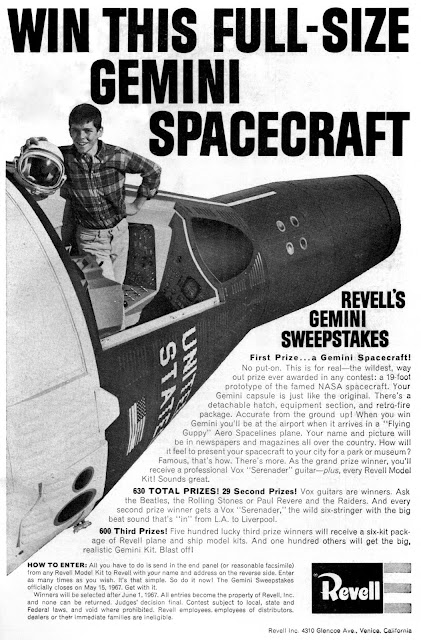 I seem to remember reading an interview where Arnold Drake said that DC cancelled the Bob Hope and Jerry Lewis comics mainly because the licensing fees (for permission to use the names and likenesses of the stars) got too expensive. He wanted to continue both series, changing the titles and using the other characters, but DC didn't think it would work without the name recognition factor of the comedians.

Hope practically became a supporting character in his own comic, anyway. The star (in the few issues that I read, anyway) seemed to be Bob's nerdy nephew, Tad. Tad had a split personality and sometimes turned into a swinging rock star/superhero called Super Hip.

The monster characters appeared semi-regularly, and were obviously based on Universal's old horror movies. AFAIK, Universal never threatened to sue DC for copyright infringement. But then, the characters were parodies, not straight adaptations.

That's one more than I had, Kid!
Thanks for showing us it.
I can't remember ever seeing any Bob Hope's in the shops, but I do remember seeing in-house ads for this very ish in other DC's I bought around that time.

I had no idea there was a comic about Bob Hope, that's so bizarre. I love the Green Hornet car and it's only 98 cents! I wish I had that.

By the way, I wanted to let you know that my new comic is finally available on ComiXology. You can check out the details here:

I think the licencing fees just seemed 'dearer' in relation to declining sales, TC. That's why Super Hip was introduced - to try and boost circulation. Unfortunately, that didn't happen and they were cancelled.

I remembered you asking if I had any Bob Hope comics and me saying that I knew I had one and would show it when I found it. Guess what? I found it.

I'm sure Criv-ites will be using your supplied link to take a look, Arion, so glad to be of service.

The Black Beauty and a full size space capsule! American pop culture in the 60s you had to love it. Commies eat your heart out.

And just think, Phil - you were living over here at the time and only experienced it secondhand, like we Brits.

Kid, my first thought was "why didn't he get Bob Hope to sign it ?" and then I read further. You could have had a photo of you holding the Bob Hope comic with Bob Hope standing next to you. But if you've only met him twice how did you get his autograph 7 or 8 times ? Did he autograph several things at once ?

Ah, you haven't been paying attention, CJ. If you read the 'Bob Hope at the Edinburgh Playhouse in 1984' post (which should be in the 'You might also like:' section under this one), you'd know that I got several items sent backstage for him to sign - after he'd already autographed a book at the stage door before the show. Add to that the personally autographed photos he sent me from America and that tots up to about 7 or 8 signatures. He also signed my programme for his 1994 show at the Glasgow Royal Concert Hall.

Kid, shame on me - I did read that post and I even left two comments first time around. So you didn't go to the Champagne Buffet Supper, I presume ?

Nah, don't drink - and Bob Hope wasn't there either. The show was excellent by the way. I sometimes find myself amazed that I actually got to see a 20th century Hollywood legend perform live - twice.

For a goodly while, the Bob Hope Hope comics were drawn by Mort Drucker, who was also doing nicely over at MAD magazine...and as someone on another blog pointed out, using the monster characters was in direct contravention of the Comics Code, although I expect they would have pleaded innocent on account of using them in a humorous context.

Yes, although the original artist was Owen Fitzgerald. I suppose that, as you suggest, because the monsters were in the same humorous vein as The Munsters and The Adams Family - who had comics based on them - the Code didn't disapprove of them. In fact, they were Code approved, so there couldn't have been a problem.

Recently (March), DC's Scooby-Doo Team-Up #36 featured appearances by comedians "Rob Pope" and "Louie Jervis" (obviously, renamed so they could be "fair use" as parody), as well as some of DC's other 1960s comedy comic book characters: Stanley & His Monster, Angel & the Ape, and the Inferior Five.

I think they'd have got away with calling them Bob Hoap and Gerry Louis, TC - that would still qualify as parody. Hell, someone stole my name and old avatar and started a Twitter account a couple of years back - and justified it on the grounds that it was parody and satire.