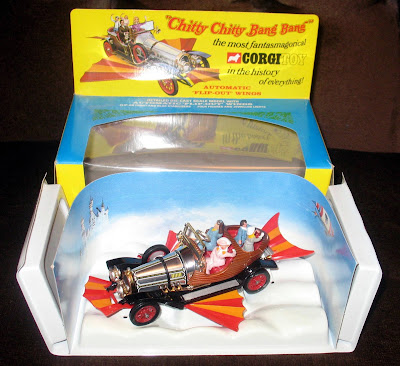 CORGI, the famous diecast model company (now owned by HORNBY), has issued CHITTY CHITTY BANG BANG three times over the years.  The first occasion was in 1968, and you can see the original car above and below.  (The car is original, but the box and base are spare ones issued with the next release.)

The car was reissued as a collectors' piece in 1991, and that's the very chappie in the next two pictures.  Cast mainly from the original moulds, the figures were newly tooled, as was the dashboard, which was slightly different, but unless you had an original with which to compare, you'd probably have been none the wiser. 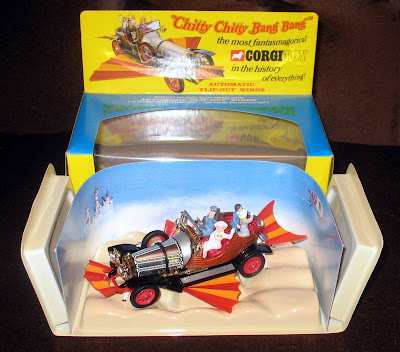 Next up is the most recent version from back in 2005.  The handbrake which released the (unpainted) wings was omitted, the wings were pulled out manually, and the front and rear wings were conspicuous by their absence.  The car included only Professor POTTS this time around, and though still a nice model, it's not quite in the same league as the original. 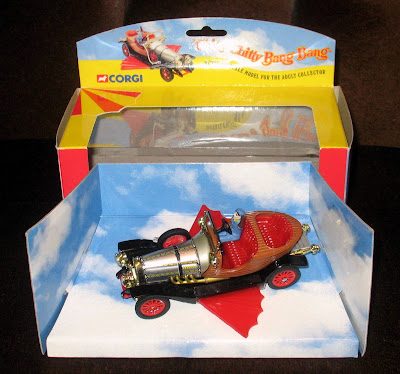 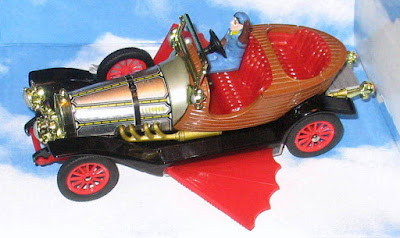 Anyone got any memories of having the original car back in the '60s?  Feel free to share them in the comments section.
Posted by Kid at Sunday, November 15, 2015

I had the original when I was a kid.....I barely remember it. It's long gone now, but I really enjoyed that movie. Can't remember a thing about it now, but loved it back then.

It's amazing how many people tend to think it was a Disney film (even TV listings) - it had that flavour to it. Never had the toy as a kid, but a relative did and I remember seeing it on visits. I love the soundtrack.

Yeah I never saw the movie as a kid but I knew the songs. As I posted on a previous entry right on this blog, we had this car and I played with it in the tub I don't know why because I don't even know if it had a floating car sequence.

Perhaps the 2005 one is a social commentary, Truly dumped Caractacus and got custody. He's left sitting alone, amid the tattered remnants of his past glory. He's off for his final flight over the needles, with an incomplete set of wings and no handbrake.

There is a sequence in the movie, Phil, where the car transforms into a sort of hovercraft. Your toy being diecast, however, it wouldn't have floated in the tub.

That'd be the Channel 4 version, DSE. Although the BBC would show it as well, the way they're going.

Was the name Caractacus Potts meant to be a joke - because it sounds like "crackpot".

I'd imagine that it may have been Ian Fleming's intention, CJ, but it's rather a lame joke if it was.

I had the original toy as a Christmas present, I think (in December 1968, probably). I remember being taken to see the film at Hamilton Odeon (possibly in '69) and there was an intermission, just after the car takes off for the first time.

You'll be pleased to know, Dougie, that the intermission card was restored for the widescreen edition of the DVD. I didn't see the movie until the mid to late '70s on TV.