Less than four months short of 47 years, today I finally got
to read the conclusion to a two-part SUPERBOY tale, the first
instalment of which I read way back in December of 1968.  (For the
story behind that, click here.)  It doesn't seem like that length of time,
and I'm amazed that it's sped by so fast.  Several school pals who were
alive when I read the first part have long since departed this mortal
vale, yet because my mind has returned to '68, it feels like they're
still out there, going about their everyday lives just as they
once did in happy days of yesteryear.

What's interesting about the conclusion is that Superboy
colludes in what appears to be the death of two alien life forms.
Okay, so they're not flesh and blood (and they're evil), but they're
sentient beings, so I'm somewhat surprised at this story receiving ed-
itorial approval.  While it certainly displays a degree of imagination,
it feels like the wrap-up was written by a different writer to the
first part.  Either that, or he didn't know how he was going
to tie it all together when he began it.

As with WORLD'S FINEST #180 (see here), I read my
newly acquired SUPERBOY #148 in a room, the door of which
displays the actual number plate of the house in which I lived when I
read the first part of the tale, nearly 47 years ago.  What's more, the
room has furniture which graced my previous room's interiors, so
there's an almost tangible air of continuity and connection,
which appeals to my overdeveloped sense of nostalgia.

But there's more!  My screensaver is the view from my old
bedroom window of the house in which I stayed when this mag
was first published, so it was easy to make-believe as I sat down to
type this that I'd read it in the same room where I'd read the first
part of the tale, ten days before Christmas on a dark Decem-
ber late afternoon in 1968.

Okay, my mental associations with this mag are imaginary
rather than memory, but don't let that prevent you from sharing
your own personal reminiscences (if you have any) of this comic-
book with your fellow Criv-ites in the comments section.

Y'know, now that I think about it, this story seems strangely
familiar, making me wonder if I'd perhaps read it out of sequence
before I bought #146.  This would account for me not realizing I'd
already read the denouement in advance of the first part of the tale,
especially as the wrap-up takes a slightly different turn from what
one would naturally expect from the set-up.  Perhaps it was one
of the issues contained in a DOUBLE DOUBLE COMIC?
Still glad to have it 'though, whatever the case. 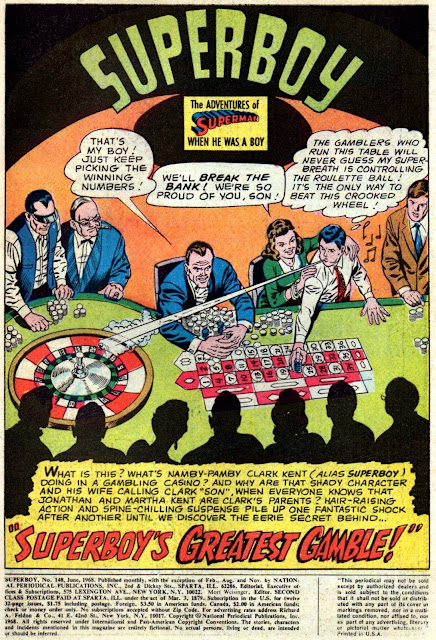 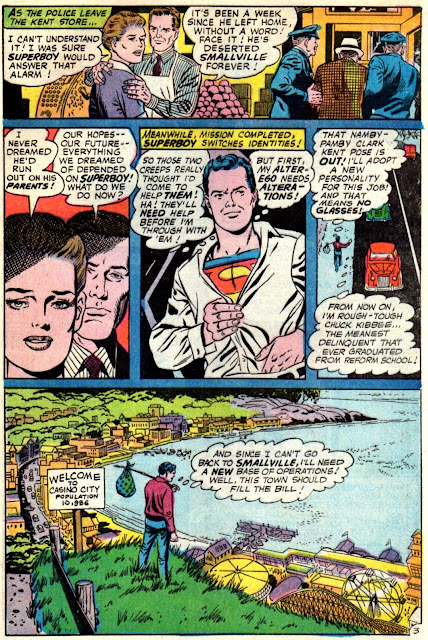 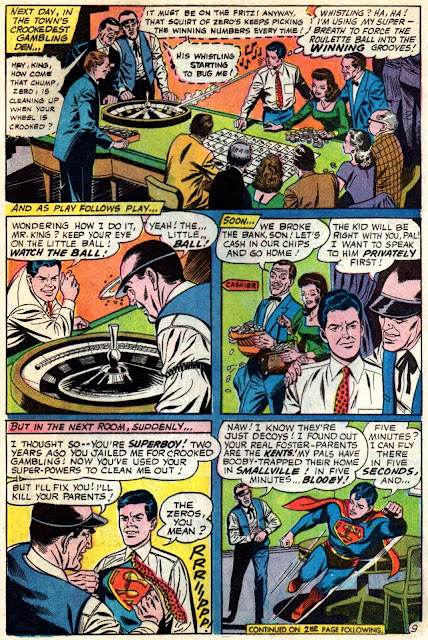 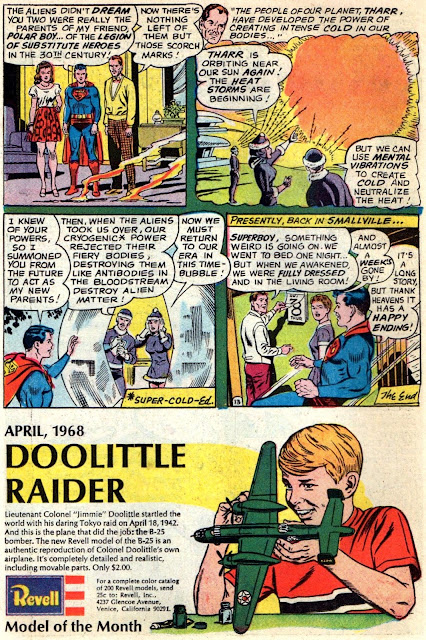 Well done in tracking that down Kid, I hope you enjoyed it - I don't think I ever read this issue but I do remember as a kid being fascinated by the covers to most DC comics, some of the covers were better than the actual stories inside. I think comic covers are a lost art now, not the actual drawing/paining of them but the ability to have a cover that made you want to know what was happening inside - today covers seem to be mostly splash pages with little bearing on the actual story - I assume this is an early Neal Adams cover?

It looks like Neal Adams to me, McS, but I don't think it's one of his better ones. I also don't like the positioning of the speech balloons, I'd have placed them differently. I agree with you about today's covers - most of them seem to be just pin-ups. I think editors don't want speech balloons on covers anymore because they think it makes a comic look juvenile. It's as if they're embarrassed by the fact that comicbooks were originally for kids. And I did actually enjoy the story of Superboy #148 - the writer's imagination was working overtime, which made it interesting.