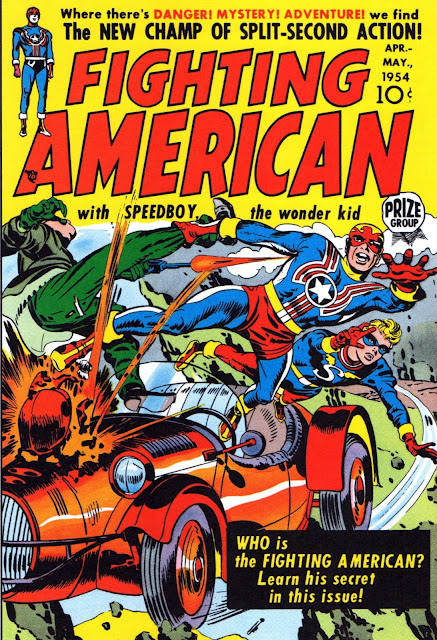 CAPTAIN AMERICA & BUCKY in different costumes -
that's all FIGHTING AMERICAN & SPEEDBOY really were,
but with Reds instead of Nazis.  Intended as a serious strip at the
start, it soon took a detour into parody, but with no more success
than before, and the mag folded after only seven issues.  HARVEY
later attempted to revive the comic, but only one issue was ever
produced before the publishers wisely threw in the towel.
Posted by Kid at Friday, August 14, 2015

These bodacious stories have been collected recently by Titan books in several formats. The trade paper is a delightful read and includes some later material by Joe Simon which never saw publication at the time. Always loved the look of the character, a better design really than Captain America.

I've got that very book, Rip, as well as the Marvel volume that preceded it by a few years. I thought the colouring in the Titan softcover was a bit murky in places, and obscured the linework, but I think that's down to the printing.