"Two comics in one, double the fun!", but WHIZZER & CHIPS was really just one comic with two names.  However, it was a good idea to readers think that they were getting more bang for their bucks.  (Or in this case, more pages for their pennies.)  On sale on 11th October 1969 (cover-dated 18th), the title lasted for one week past its (un-celebrated) 21st birthday before being merged with stablemate BUSTER, thereby ensuring that at  least a few W&C characters survived a bit longer. 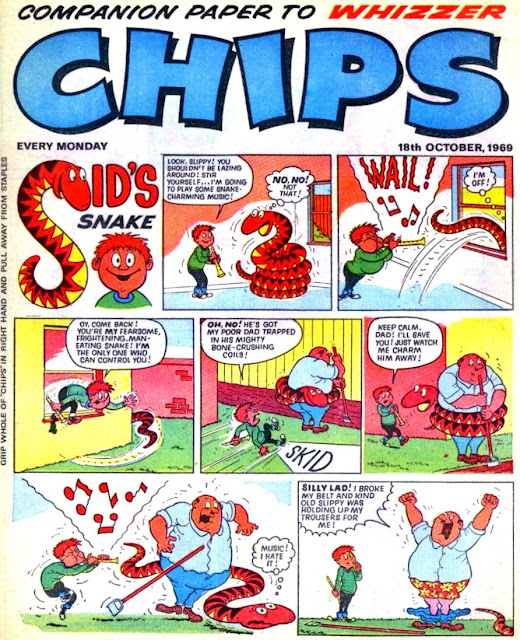 I bought the first few issues but it wasn't a regular of mine, I preferred more of a mix of humour and adventure (like Buster around this time) Whizzer and Chips was mostly humour as I recall. I did pick up the odd issue up until about 1972 when I stopped reading (lamost all) UK originated comics for MARVEL UK ans US comics

W&C had a couple of semi-serious adventure strips to begin with - I'm not sure when they were phased out. Probably after I had given up buying it regularly. I felt privileged to contribute to W&C and Buster in the mid-'80s. Great comics, sadly missed.

I really miss the Buster circa 1968 - 1971 it was a brilliant comic (like Wham and Smash) - contributing to the "Buster" (in particular) is pretty cool Kid you should feel chuffed I would be.

Well, it was only in a minor way, I suppose, but it was still great to have that connection to something from my youth. I do feel fairly chuffed.