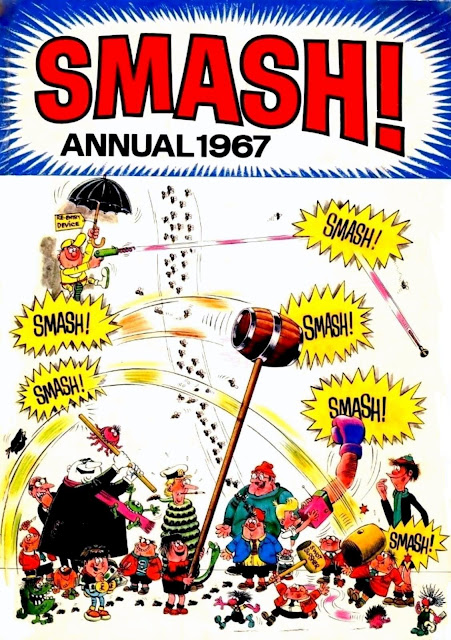 SMASH! comic came out in February 1966, so as this
Annual would have gone on sale from August or September,
ODHAMS PRESS were quick off the mark getting it out with
the other Annuals for the coming year.  They must've prepared
it at around the same time as the weekly, which isn't always the
case.  Sometimes, publishers will wait to see if a new comic is a
success before doing an Annual.  WHAM! comic came out
in '64, but the first Annual was for '66, released in '65.
Posted by Kid at Tuesday, August 18, 2015

I pretty sure I got a Smash annual (Odhams) as I got the weekly comic pretty regularly for years but I cant quite recall them. I think Smash had quite a few annuals published under Odhams and IPC including a couple of specials ( I have one of these somewhere) soit must have been quite a success in its time. Although I was (still am) a big fan of Odhams comics Pow, Smash and Wham (and to a lesser extent Fantastic and Terrific) I always preferred the Smash IPC weekly (but Wham was the best imho).

I supposed I liked Wham! slightly better, because it had the Fantastic Four & Frankie Stein, but I much preferred Smash! to Pow!, which I really only started buying regularly when Wham! was merged with it. I also liked the IPC version of Smash!

In fact, now that I think of it, I loved all 5 Power comics. Incidentally, there were 4 Odhams Smash! Annuals, 6 IPC ones, plus a Smash! Fun Book, which was an IPC softcover 'Annual' type book more in the style of the Odhams books. So that was 11 altogether.

"Smash comic came out in February 1966..." - what a coincidence, me too !! Which means I'm too young to remember those Odhams comics - in fact, I'd never heard of them till I started reading your blog, Kid.

See? And to think some people think my blog's a pile of sh*te. An unsolicited testimonial from CJ as to its educational value.