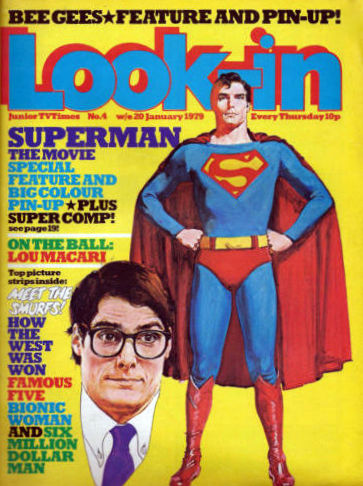 So far, nobody's really captured playing SUPERMAN quite
so effectively as the late CHRISTOPHER REEVE.  This issue of
LOOK-IN came out in January of 1979, which is when I saw the
movie in the ABC cinema in Glasgow's Sauchiehall Street.

Superman and Lou Macari must be one of the strangest combinations ever to feature in a magazine. Except possibly that issue of Marvel Team-Up that featured Spider-Man and John Belushi fighting the Silver Samurai (issue 74)...

And what about the Smurfs and the Six Million Dollar Man? Those U.K. mags certainly had variety, DD.