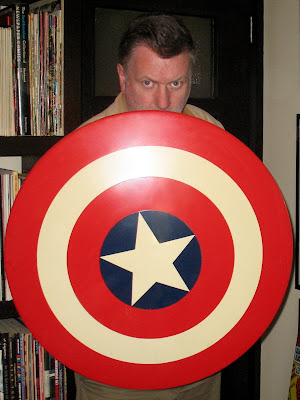 Just signed up as KID AVENGER for the new
CAPTAIN AMERICA movie.  (More like 'kid-on
Avenger' I hear you say.)  Look at that piercing stare -
baddies balk before my gaze, women wilt at the force
of my personality.  (Or maybe it's these socks I've had
on for the last fortnight?)  Either way, I'm talking my
usual p*sh, but I just wanted to show off this great
shield that belongs to a pal.

I think it would be a great idea for Cap to
have a caddie- someone to carry his shield for
him.  If it ever happens, I want the job.

A good while back, in some post or other, I
mentioned an alley in Glasgow which I said was
like something straight out of a STEVE DITKO
SPIDER-MAN comic, and that it wouldn't surprise
me to see ol' Spidey clinging to one of its walls.  Well,
below is the very alley of which I spoke - looks just
like I said, doesn't it?  In fact, it wouldn't look out
of place in a JACK KIRBY FF mag either. 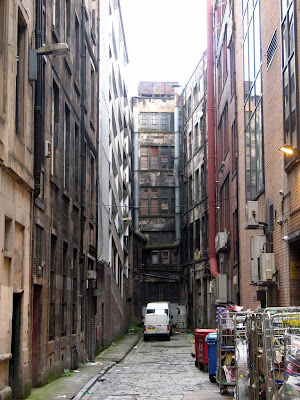 I see what you mean, cool alley!

I keep my eyes peeled for Spidey whenever I pass it, AJ.