I've read that SUPER DC came out in June 1969 and lasted to
July of 1970.  That may be true (in some parts of the country any-
way), but it's not the whole story.  When I bought issue #1, one of the
trio of free gifts was a 'wristwatch calendar', consisting of three adhesive
strips (one month on each) to be applied to the strap of one's watch.  The
months on my calendar labels were November and December 1970, and
January 1971.  Not that they were any good to me, because I didn't wear
a watch then, nor do I wear a watch now.  However, this fact tends to
indicate that, at least in Scotland, the first issue didn't go on sale
until September or October of '70 at the earliest. 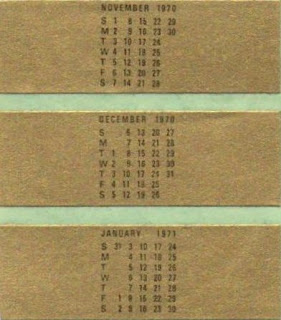 So what's the scoop?  You're asking me?  I can only speculate,
but here's what may have happened.  The comics were tried out in
England first, and unsold copies were then distributed to the rest of the
U.K. at a later date.  This would explain why all 14 issues bore the price
of 1/- (one shilling) even after decimalisation on February 15th 1971.  In
some (but not all) cases, issues on sale after this date had a 5p sticker
covering  the old price.  Or perhaps there was some kind of nationwide
delay between publishing and distribution, and the main reason that
people think the comic came out in 1969 is because of the
price and the copyright date in the indicia. 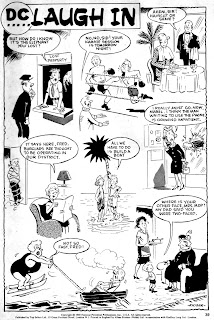 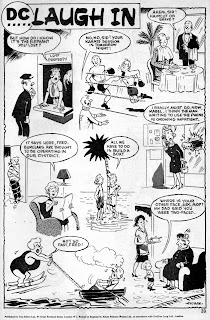 There's evidence to suggest that issue #1 (at least) was
reprinted, as the indicia is different in two copies I have in my
collection.  Take a look at page 39 (above) and spot the difference
between both versions.  I suppose this could perhaps merely be as a
result of the NATIONAL PERIODICALS copyright attribution being
added during a pause in the print run when it was noticed it was missing,
but that wouldn't explain why the comics are also slightly different sizes.
So it's anyone's guess as to the true history of this U.K. reprint monthly,
published by TOP SELLERS and edited by MICK ANGLO (who
also illustrated some covers and text stories).  If you think you
can help clear up this minor mystery, feel free to chip in your
two cents (or pence) worth in the comments section.
Posted by Kid at Tuesday, July 07, 2015

I always thought it was later than 1969! My memories of Super DC are very vague. My aunt and uncle bought it for me for a few months. They had been estranged from my parents until my dad had cancer treatment in 1970. Then we saw them more regularly throughout the 70s.

I was fascinated by the text feature on the Legionnaires,which began, I think in issue 2 of SDC- particularly the Super-Pets. I was about seven years old, I reckon. I didn't actually see the Super-Pets, though, until I read a Double Double comic that reprinted Adventure 365 and the feature in this link: http://adventurecomicsblog.blogspot.co.uk/2012/11/adventure-comics-365-february-1968.html

That must have been 1971/72, I think, because my next Legion roll call was in the 1973 revival http://dc.wikia.com/wiki/Legion_of_Super-Heroes_Vol_1

Also, the photo-feature on Cybermen was no longer current. Many of the images come form 1968/69 episodes but they felt like ancient history at that age. So, long-windedly, I am convinced that SDC was on sale, in the Central belt at least,in 1970.

I'd say you were right, Dougie, as it was 1970 when I bought the first ish, and the rest were pretty regular after that. I had a look at those text features on the Legionnaires the last time you mentioned them, with a view to putting them on the blog, but there were no pictures and were therefore pretty boring-looking. Might do it yet 'though. Funny to think that a 'new' comic was 'old' before it even went on sale, eh? I suspect that they were an experiment which were all printed at once, thus making all the letters fake - as some of them clearly were. None of their competitions had a specified expiry date, merely stating the "Entries must reach us within 30 days of publication". It's unlikely that, if they were new, issues published after decimalisation would have had a shilling price on the cover, so something sure smells fishy in Denmark.

I had the same memories of seeing this comic from issue 1 in 70/71 (in Johnny's Rutherglen) and remember thinking it had been published before that. This was confirmed when I read a blog piece (or possibly an extract from a Denis Gifford book... I think) when it was pointed out that unsold copies of the monthly were later redistributed to newsagents again with a 5p sticker added after the initial run had ended (or half way through it). I think the initial book was as you say published as a whole run and then distributed UK wide, rather than experimenting in England (population would be too big in England to bother with not going UK wide at the start) I think if anything it would be published in Wales or NI first or more likely in Scotland as they did with Vulcan.

I'm glad to report that the shop (Corson's) from which I bought my first issue (#1) still survives in the same location. 'though it no longer sells American comics as it once did. Oddly, McScotty, if I recall correctly, only one or two of the later issues that I bought had a 5p price sticker on them. I suppose that's because the one thing that nobody was confused over when decimalisation was introduced, was that 1/- equalled 5p. Yes, I favour the second explanation myself regarding distribution. My first speculation was merely to accommodate some (mainly) English people's claim that they bought the comic in 1969.

Some of the stories in Super DC have stayed with me to this day- "The Round-Robin Death Threats"; "Supergirl's Greatest Challenge"; "The Batman/Superman of Earth-X"; and the deathless "Dog from S.C.P.A". I think I read "The Man From the Phantom Zone" and "The Menace of Clayface" there too.

Of course, I would be delighted to see those text pages again- even just the Super-Pets entry.

I'll try and put them up tonight or tomorrow, Dougie. Stay tuned. Incidentally, I posted a Barry & Boing tale for you a while back, but you never responded to it, so I don't know if you've seen it yet.

Oh, sorry. I might have missed it. My short-term memory is terrible. Will look out for it and the LSH text features!

I was out for most of the day, Dougie, so haven't had a chance to do the LSH post yet. I'll try and get it done later tonight.