In the 1960s, MARVEL COMICS licenced a series of posters which were 'slicked up' with some extra delineation to make them a tad more detailed in the inking department.  Most of them made an appearance as back page pin-ups on British mags like FANTASTIC and TERRIFIC, and even, in the case of the above SPIDER-MAN pic, as an iron-on transfer given away with an issue of POW!

So here's the first in a two-part post to thrill and delight you. 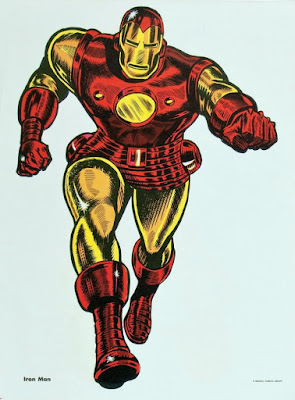 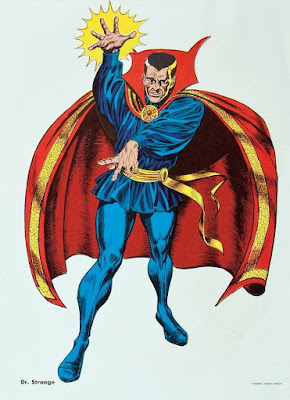 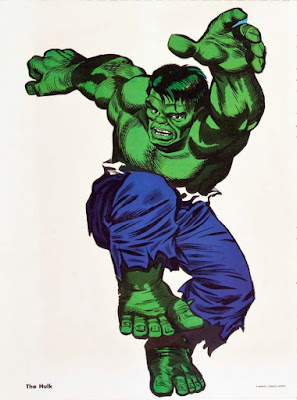 I always love that image of the Hulk dancing.

Actually, he had ants in his pants.

Kid can you tell us why companies redraw art? I can place all the pieces from actual comic books. Were they considered not polished enough for poster art? All of these have been re inked.

Yup, that's what I was referring to when I said they'd been 'slicked up'. The reason seems pretty obvious, Phil. A drawing originally produced for a comicnook-sized panel would look pretty sparse when enlarged to poster size, so some extra detail was added to make each figure more suitable for its larger dimensions.

Had that Hulk poster on my wall for years as a kid, off the back of Fantastic mag issue 20? (don't quote me) - wish I'd kept the whole mag!, but I still have that page.The over-working 'finish' does kinda diminish the character of the original art though, well as we were used to seeing Kirby at least, which had detail but not due to cross hatching as a rule. They do have a nostalgic quality looking back at them now. Good to see these.

Funnily enough, I like that extra detail, PC, because it gives an extra dimension to the drawings. As you know, I have a full set of Fantastic and Terrific, and I'm surprised that not all 8 posters were used on the back pages. The Spider-Man one (sans colour) appeared on the cover of Pow! #2 to advertise the free iron-on transfer.

Marie Severin was likely involved in some of the noodling/touch-up work, however, it looks like John Romita may have done a little work on Iron-Man's face and possibly someone else on Dr. Strange. As I mentioned in another post, its also possible that John Verpoorten worked on some of these posters as well.

Thanks Nick, if anyone's likely to know, it's usually you, so it's good to have your thoughts on the matter. Maybe they'll re-release them some day, eh?