DENISE OR BERYL, MENACE OR PERIL? THAT IS THE QUESTION...

I was looking through some old BEANOs earlier tonight and noted how good a presentation the comic had in days of yore.  No glossy pages, no interior 'full' colour (The BASH STREET KIDS aside) and no tacky bits of tat attached to the comic to encourage children to buy it.  It really was an appealing little package.

However, that's not the point of this post.  No, what I'm writing about tonight, O discerning members of this bold blog, is about the DENNIS The MENACE's cousin DENISE, who was practically a dead-ringer for BERYL The PERIL.  Denise had first appeared in 1967, but had a different hairstyle (like Dennis's).  Her '70s look made her more like Beryl in that her hair was the same.

Beryl evolved down through the years, until she had a slightly different look to artist DAVEY LAW's original character design, but I'm uncertain as to whether this process had started (or, at least, settled) when Denise re-appeared in March 1979. So, here are the cousins doing what they do best - menacing!  Enjoy! 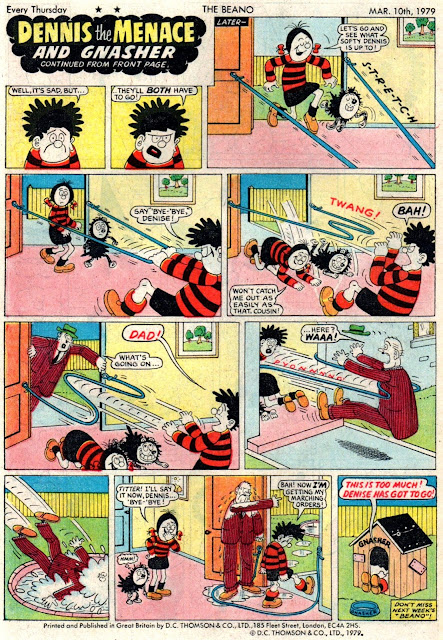