SHAZAM! WITH ONE MAGIC WORD - PART ONE...

CAPTAIN THUNDER was his original name, but by the time he appeared in WHIZZ COMICS #2 (there was no #1), this had been changed to CAPTAIN MARVEL.  A couple of ashcan editions were produced to secure copyright, but similarly-titled periodicals by rival publishers meant a change of name for the good Captain's premiere issue in 1939/'40.

Captain Marvel outsold SUPERMAN for a while, prompting NATIONAL (DC) to launch a plagiarism suit against FAWCETT, but the initial decision fell in Fawcett's favour.  National appealed and won - and although Captain Marvel himself wasn't found to be a copyright infringement, it was felt that certain storylines and situations might be, requiring a re-trial to determine the facts.

However, because of the preceding twelve years of litigation - plus a decline in circulation of CM titles over that time - Fawcett decided it wasn't worth prolonging the battle and threw in the towel.  They discontinued their comics line and paid National $400,000 in damages - which indicates that their legal costs must have been enormous if paying such an astronomical sum to their rival was considered the least expensive option.

National licensed the character from Fawcett for a revival in 1972, and finally acquired the rights to the Marvel Family line in 1991.  Of course, there's still the MARVELMAN/MIRACLE-MAN situation to consider, but I'll leave that for somebody else to explore as, frankly, I can't generate either the energy or the enthusiasm to go into it. 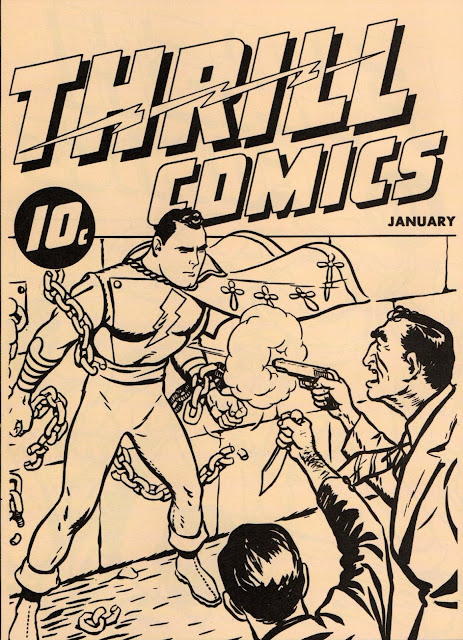 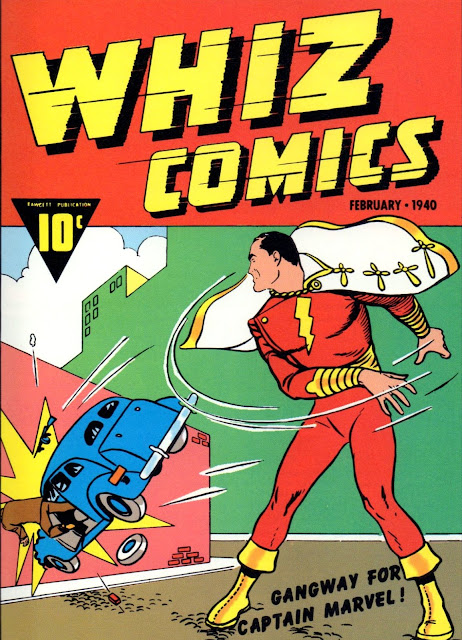 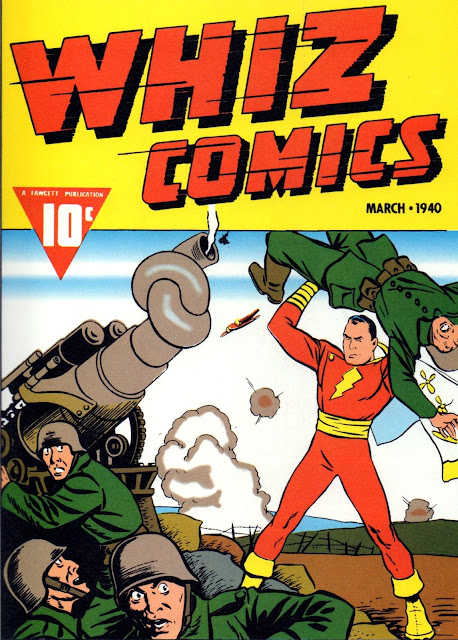 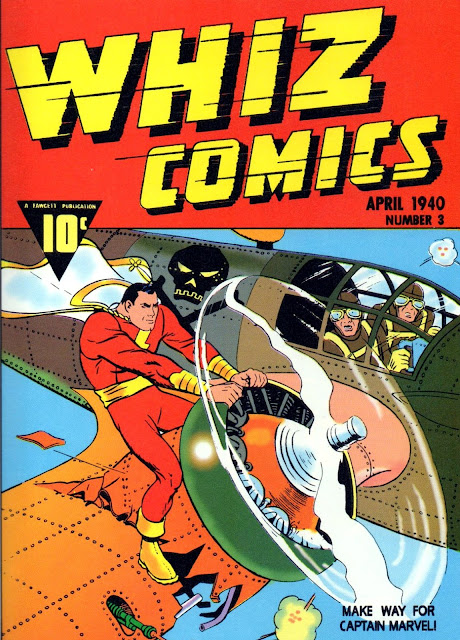 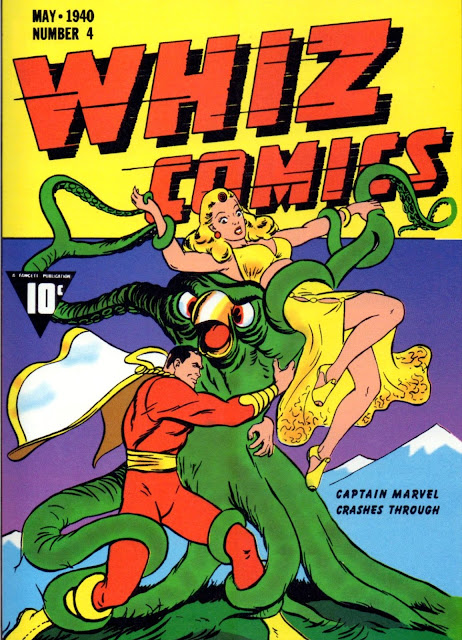 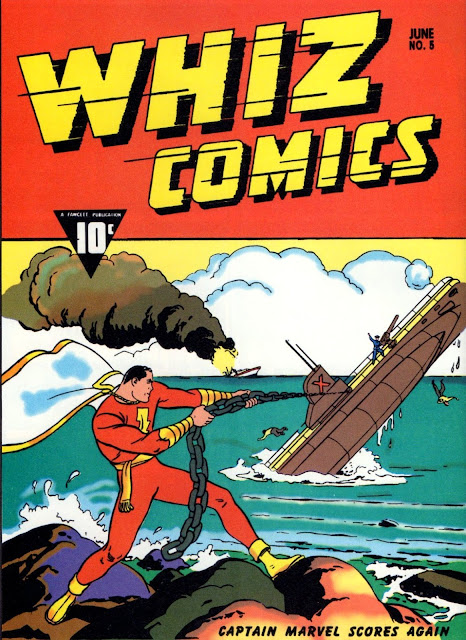 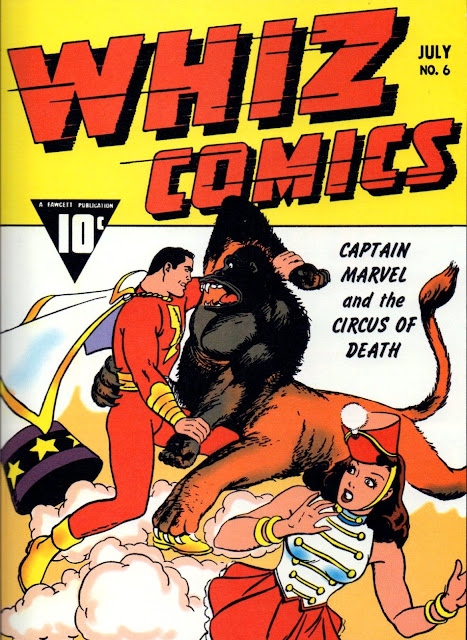 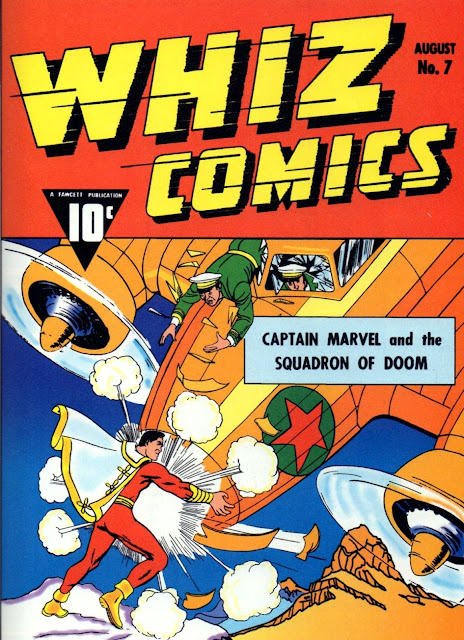 I couldn't understand why DC published "Shazam" in the 70s as a humour title so I didn’t read it or any of the Golden age reprints they published. However I managed to get 3 of these early 70s editions for £2 a few years ago with C C Beck art and thought it was a really nice little book. I think it’s a pity there aren’t more comics like this today with a fun character and nice crisp art for the kids (and bigger kids like me) to enjoy instead of endless production line of rebooted brooding, dark, violent, psychopath “heroes”……. gawd I really am turning into an old git!!!

I bought the first several issues of the '70s CM back in the day, McScotty, and couldn't understand how it had outsold Superman in the '40s. I suppose more kids (as in a greater range of ages) lapped it up, but it was just a tad too whimsical for me. I suppose one had to be there at the time (the '40s). Even C.C. Beck gave up on it after 10 issues, saying the stories were rubbish. However, back then, DC were trying to give the readers the 'original' Captain Marvel, but by then we were in the days of 'relevance' and CM seemed an odd fit in the DCU. Perhaps his time had been and gone, eh? I did enjoy Jerry Ordways's later take on the character.

Forget Mar-Vell, Carol Danvers, Monica Rambeau, and Roger Winkle. Billy Batson was the real Captain Marvel. Well, as "real" as a fictional character can be.

Unfortunately, DC has ruined the series in recent years by trying to shoehorn it into their grim-and-gritty house style. They just don't seem to grasp that some characters and concepts (Batman, Dr. Fate, Deadman, the Spectre, Phantom Stranger) are well suited to grimdark, but others (Shazam, Plastic Man, Captain Carrot) are better suited to a tongue-in-cheek approach. But DC and Marvel both seem to have a adopted a policy (with a few exceptions, like DC's Scooby-Doo) that all titles have to exist in the same "universe," and be portrayed in the same tone.

I liked the semi-satirical style of Shazam and Plastic Man in the 1970's, but DC went overboard with the comedy. Both series could have used more subtlety. They almost made the 1966 Batman TV show look like Shakespearean tragedy. One problem may have been that Denny O' Neil just didn't have a talent for comedy, whether subtle comic relief or out-and-out farce.

Ironically, DC had sued Fawcett, but then, two decades later, got tied up in a trademark dispute with Marvel Comics over the name "Captain Marvel." As a result, DC could use the name in the strip itself, but not on covers or in merchandising. A story ("What's in a Name? Doomsday!) in Shazam #7 (1973) may have been a spoof of the trademark glitch.

Besides the trademark problem, DC may not have been eager to publish a comic with the name of their biggest competitor on the cover.

The first 14 issues of the '70s SHAZAM! comic carried the tagline of 'The Original Captain Marvel', but that was changed with #15 to 'The World's Mightiest Mortal' after DC received a 'cease and desist' notice from Marvel's lawyers. I understand that the character is referred to simply as SHAZAM in whichever of today's crop of comics he appears in.

I liked the detective element of the Elongated Man (and Batman), and wish they'd return to intriguing and entertaining their readers, rather than just trying to shock them.

I read those DC Shazam comics in the 70s and didn't like them. Too juvenile even for me. We had gone through the Green Lantern/ Green Arrow relevance comics, the Marvel revolution and Captain Marvel seemed like it was designed for lil kids learning to read. The new DC versions are worse. Since the big red cheese is a juvenile character it's disconcerting to see him in the modern bloodthirsty DC universe.

I get the impression from what I've read over the years, Phil, that C.C. Beck thought that the CM style of storytelling was the best way to do ALL comics. I never really saw any difference between the new stories he complained about (and altered, until told to stop) and the ones he drew in the '40s, to be honest. Both runs were equally bland. And had all comics been done that way, they probably wouldn't exist today.

They toyed with another name after Thunder before settling on Marvel. I'll try a d find it.

I believe it was Captain Marvelous, JP (we'd have a double 'l') - which they shortened to Marvel.

Ah, thanks for that, as I wasn't able to find it again and it would have niggled me!