A GENTLE BREEZE FROM HUSHABYE MOUNTAIN... 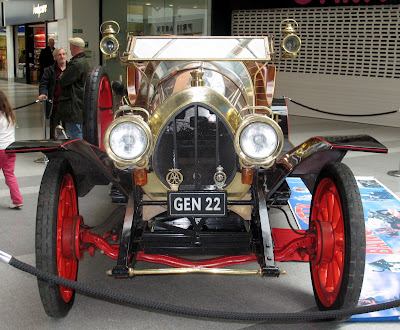 Over Easter, one of the most famous cars in the world was parked in a local shopping precinct.  Or at least, a replica of it was.  It's MOT'd, taxed, insured, and fully road-worthy, so it is a real car - it's just not one of the half-dozen that appeared in the actual film.  However, apart from the number plate, GEN 22 (as opposed to the original - GEN 11), I'd say it would be difficult to spot the difference unless one is a total expert on CHITTY CHITTY BANG BANG and all its variants. 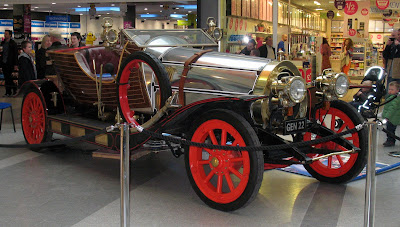 I first saw the film on TV in the mid-'70s and bought the soundtrack LP not long after.  I now have it on CD as well - along with a DVD of the movie itself.  Back in the '60s, one of my cousins had the CORGI TOYS model of the car, and today I have several versions in my collection:  The Corgi original, a '90s rerelease, a recent, cheaper Corgi version, and three Corgi Juniors.  I've also got a bigger, super-detailed version around 14 inches long, not counting the front and back wings. 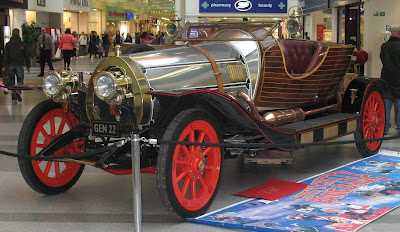 Here, though, is an actual full-sized, fully-working replica of the car which I photographed in a quiet moment over Easter.  Standing next to it, one is amazed by the sheer enormity of the vehicle - it's huge - about 16 feet long.  If it ever comes to your town, make sure you go and see it - it's well worth doing so, I assure you. 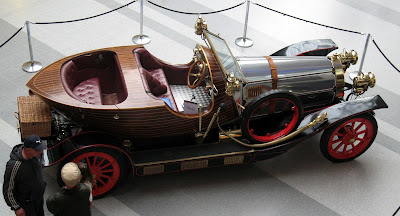 It's not unusual to see the film attributed to DISNEY in TV listings whenever it's on the telly, but, in actual fact, it's an EON production - the same company which makes the BOND movies.  Hardly surprising when you consider that it was IAN FLEMING who wrote the book on which the movie was based.  The SHERMAN BROTHERS composed the songs for the film, which partly explains it being mistaken for a Disney one as they also wrote the songs for the earlier MARY POPPINS.  The fact that DICK VAN DYKE starred in both cinematic classics cements the misconception in most people's minds. 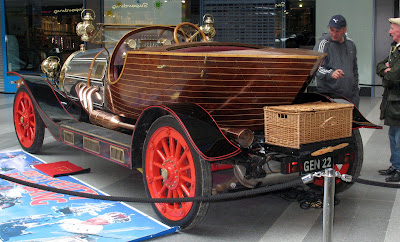 The original 1967 car was designed by KEN ADAM and FREDERICK ROLAND EMETT, and built by ALAN MANN RACING in Hertfordshire.  Like the original, the replica above had its boat-deck portion built by actual boatbuilders.  Also, the brass snake horn is from one of the original movie Chittys, so therefore shares a connection to the 'real' one. 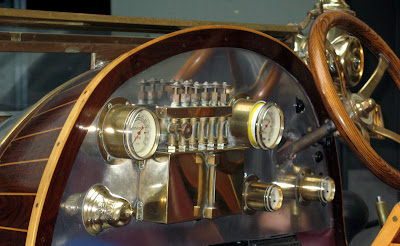 Incidentally, the car does have wings (I saw them on a previous occasion a few years back -see photo below), which for some reason weren't deployed this time around.  (They're separate pieces which have to be affixed.)  Perhaps it was due to space restrictions in the display area, or to prevent people tripping over them. 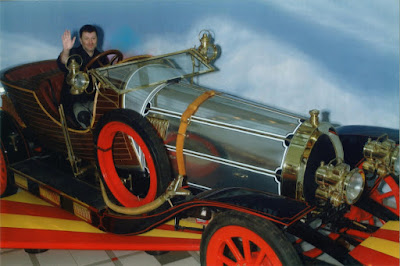 one of my favourites also.
my mother used to take us to the cinema regularly.

anyway i let my kids watch this when they were two years old and it became a fave of theirs for a good few years,to the point of them running around with bamboo sticks emulating the morris dancer routine in the movie....
roll on the years and they are now eight years old and they do not remember the movie at all...none of it.
Not even when i used to sing 'hushabye mountain' to them...
time is a mystery to me.

Never mind, baab - just think of the fun you'll have watching the movie with them again. Then you can create new memories for them - ones that they'll probably remember this time 'round.

My mum took me and my brother to see Chitty at Hamilton Odeon- now demolished- at some point in the late 60s. As I recall it, there was an intermission just after the car flies for the first time. But as your blog has proved, my recollection can be faulty!

Dougie, you're actually right about the intermission. I never saw the movie when it first came out, but one of the DVD versions (there's two) has the intermission captions on it.

Also, I remember seeing Live & Let Die in 1973 and that had an intermission in it. Just as Bond and Quarrel Jr take off in a boat from the jetty, I think.

Ahhh I see you were in the EK shopping centre then Kid, nice to see the car there (takes folks minds of the number of shops shutting down on a daily basis) I'ts an amazing looking vehicle. I had the Corgi toy as a kid, loved it but was too scared to take it out its box for too long as it was pretty pricey for the time. Saw the movie first time around at the RIO or Odeon in Rutherglen and would love to see those DVDs with the intermission in them. McScotty

I'd have to check, but I think the DVD with the intermission break is the special boxed edition, which came with a Corgi Junior Chitty and a soundtrack CD of the stage show. It's also in widescreen (unlike the regular-screen version) and in stereo.

That shopping centre is a disgrace, McScotty - it's hardly worth the visit.

It's interesting looking at the opening credits and spotting the names of regular Bond movie crew (plus occasional acting talent)...wonder if this made any kind of dent in Bond film schedule?

I doubt it would've been allowed to - Bond was a guaranteed money-spinner - Chitty was probably a bit of a gamble I would've thought. Also, although all the Bonds from Dr No to Thunderball had all been made a year apart, after that it was one every TWO years, so the schedule was more relaxed by the time Chitty rolled 'round.

walls ice cream at the intermission.
you are right about the dvd boxset as well,thats the one i have,if its about six or seven years ago.
I attempted to listen to the stage show cd but ..none of the magic transfers.

I'll have to listen to it again to remind myself what it's like, but I doubt it matches the original. Great little movie, wasn't it? I was surprised to find out that Dick Van Dyke was actually several years older than Lionel Jeffries, who played his father.