Well, we've passed the half-way mark.  This latest instalment of 1967 TERRIFIC front and back covers takes us up to #28 and, as there were only 43 issues in total, that leaves only 15 to go.  Regular readers will have noticed that some pin-ups have also appeared in the FANTASTIC COVER GALLERY posts.  That's simply because a few of them were simultaneously printed in both comics - but not always, sometimes being entirely different between both titles.  If you bought both of them, you occasionally had two copies of the same pin-up - if you didn't, you only had one, but probably missed some good ones by not buying the companion paper.  Ah well, who ever said that life was easy? 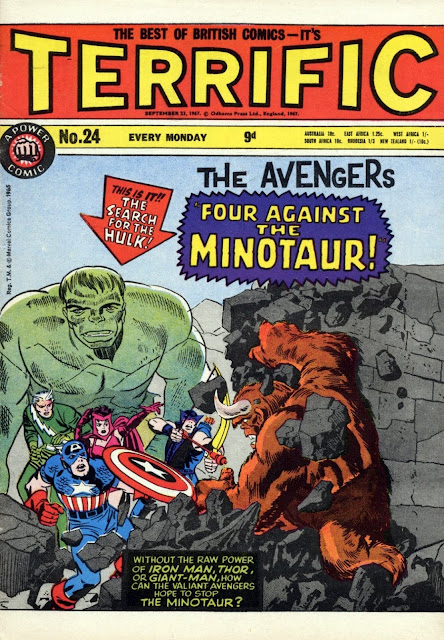 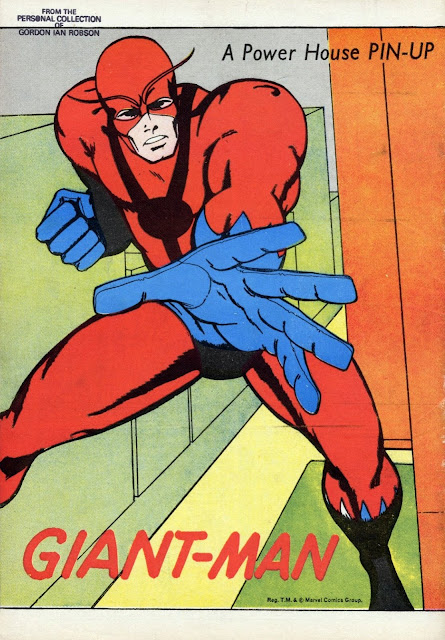 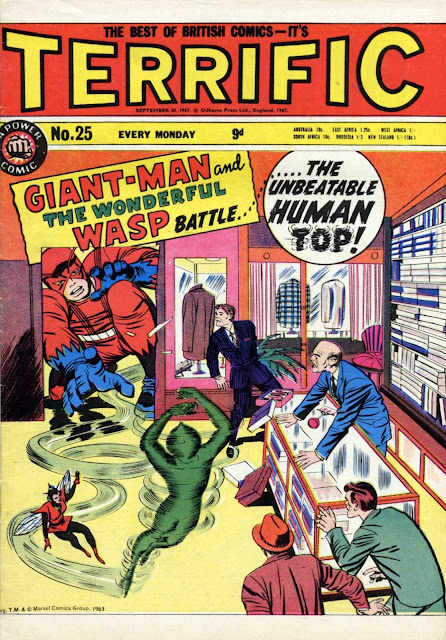 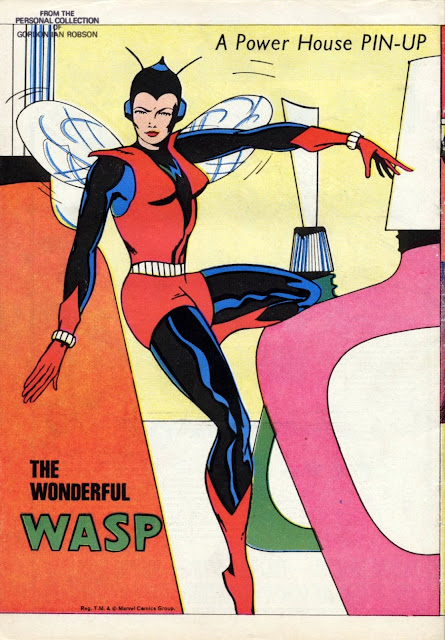 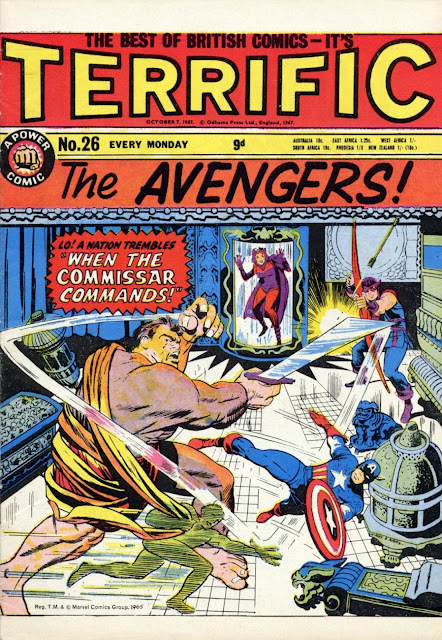 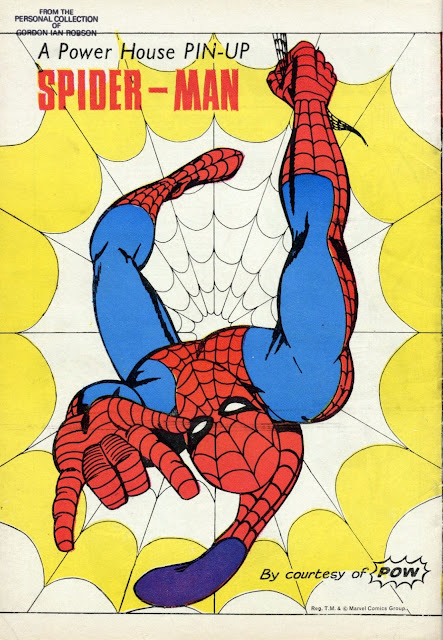 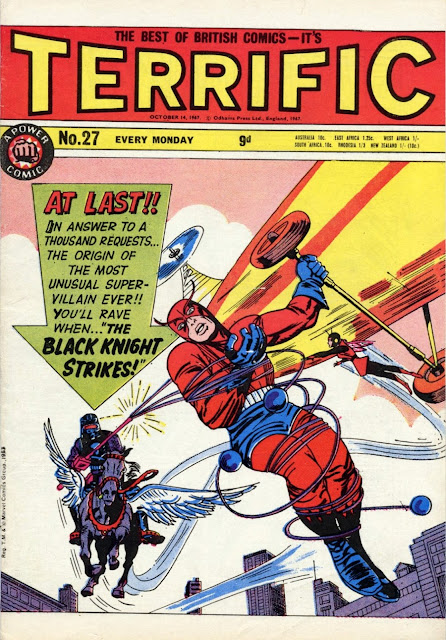 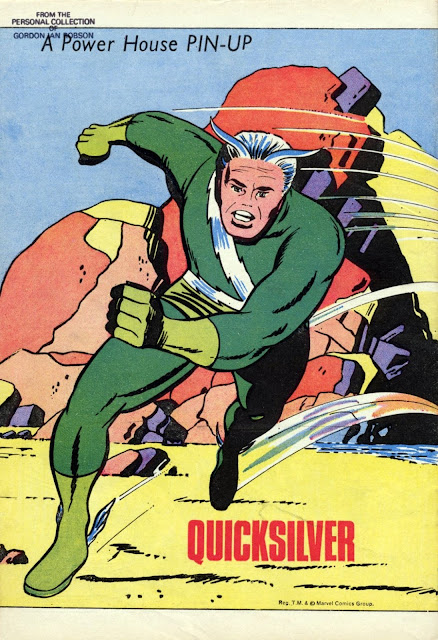 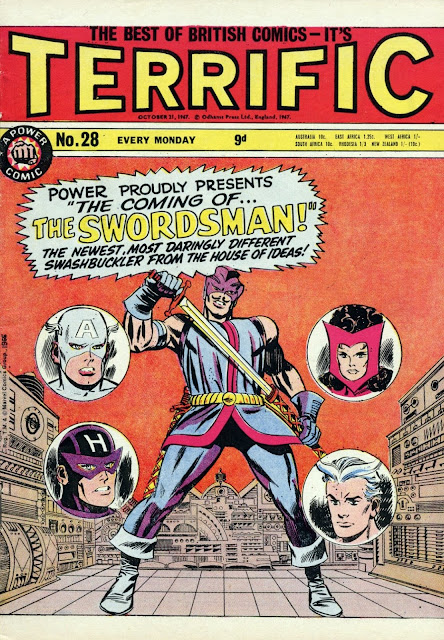 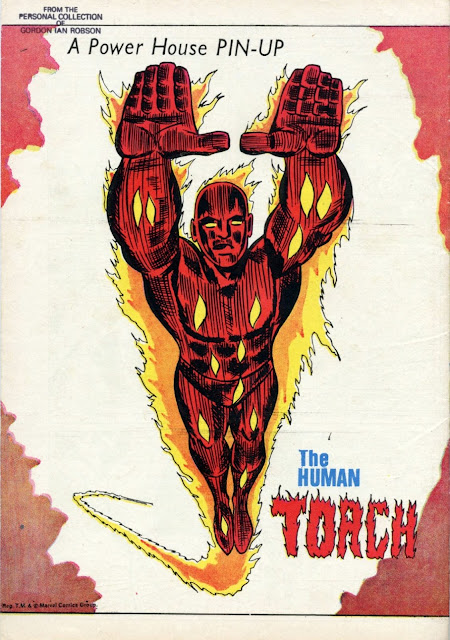 Remember to tune in again for Part Seven - coming soon.
Posted by Kid at Sunday, April 29, 2012

dial b for blog has the origin of that hulk poster on his site at the moment.
The first time I read that giant man,human top story was as a black n white reprint,in Astounding tales(?)
Astonishing Tales(?)
The name escapes me of the publisher ,I am sure you know who I mean.The home of a ton of ditko and Kirby monster stories....
I read quite a few Marvel stories via these.
I recall being quite taken by the human top in this story,I will need to look for it online,the sympathy angle based on his age(?) hhmmmm odd memories this morning.

Alan Class is the name of the publisher you're thinking of. He did such titles as: Secrets of the Unknown, Uncanny Tales, Astounding Stories, Amazing Stories of Suspense, Creepy Worlds, Sinister Tales, and probably a whole host of others.

I knew which issue that Hulk poster was lifted from, but Nick Caputo revealed that the retouched version by Marie Severin came from the M.M.M.S. posters when I posted it as part of the Fantastic Cover Gallery not too long ago.

Just what I always say.

It's great that you've reached the half-way point. I very much enjoy seeing thses covers, as well as the pin-ups. All of the new ones look like the work of Barry Smith. I particularly enjoy the Wasp drawing. It looks like she's posing next to bottles of nail polish remover!

I have to confess, Nick - I quite fancy Jan in that pin-up. I wonder if young Barry copied the pose from a 'girlie' mag? Curiously, I never thought Jack Kirby drew a sexy Wasp, but Don Heck had my boyhood pulse racing with his rendition of her. (Too much information, eh?)

Don Heck's Wasp was attractive, and John Buscema's was nothing to sneeze at either!

That Spider-Man Pin-up shows some great imagination! I can't take my eyes off of it!

It also shows great flexibility that I didn't think even Spidey had, Don. He must be made outta rubber. You wouldn't think it was a Barry Smith drawing compared to his later accomplishments.