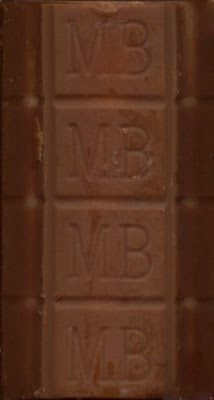 Back in the 1960s, one of the favourite items of confectionary amongst kids was the MONSTER BAR - otherwise referred to as an MB Bar.  In some ways it was similar to a FRY'S CHOCOLATE CREAM, but without a wrapper - and, if I remember correctly, it was originally priced at tuppence (2d).

In the mid-'80s, because of new rules and regulations, it was given a wrapper - but this was relatively short-lived as it disappeared from the shelves not long after.  It returned a few years ago looking pretty much the same - but with an inferior chocolate covering and tasting not quite as good as it once did.  Whether or not it's produced by the same manufacturer is unknown, but I doubt it.

It currently sells for around 75p in small, independent sweet shops, so it's actually quite expensive compared to what it once was in its heyday.  Good to see it's still around though - even if it's not quite the quality, value for money product of yesteryear.
Posted by Kid at Sunday, April 01, 2012

Despite eating MB Bars most of my life from about 8years - 16 years old (ok Ive had a few since then) I never knew MB stood for Monster Bars - good to see you tracked one down (was it disappointing?) I was disappointed to see bags of Rainbow drops in a shop in Hamilton in bags that were about the size of a 3 year olds glove I(a standard measurement of size!) when I were a lot they game in massive bags I'm amazed kids today manage to get obese!! McScotty

Taste-wise, it was slightly disappointing. When I was a kid I'm sure the chocolate was darker, making me wonder if the original was plain chocolate. The same thing happened to Jameson's Raspberry Ruffle Bars. Cadbury's bought the bar in the late '80s or early '90s then changed it from plain to milk chocolate - then they discontinued it. Thankfully, someone bought it back from Cadbury's a few years later, but retained the Jameson's name.

When you think about it, because MB stood for Monster Bar, to call it an MB Bar is to basically call it a 'Monster Bar Bar'.