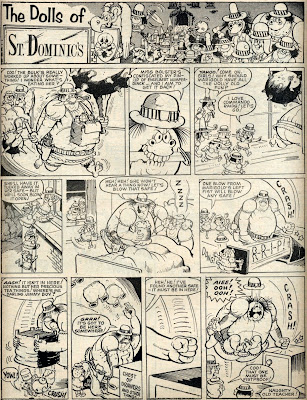 As ENGELBERT HUMPERDINCK (born ARNOLD GEORGE
DORSEY in 1936 and taking his stage name from a 19th century composer)
is representing the U.K. in the 2012 Eurovision Song Contest, I thought
it would be fun to take a look at his appearance (sort of) in a comic strip
when he was at the height of his fame back in 1967. 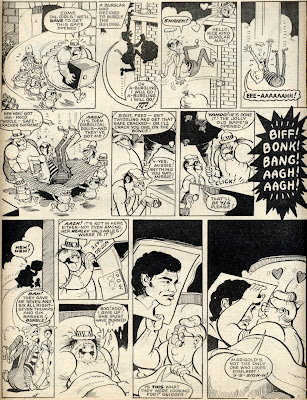 The comic was called POW! and the strip was entitled THE DOLLS
OF ST. DOMINIC'S - about a  ST. TRINIANS-type group of schoolgirls
who later joined forces with THE TIDDLERS from WHAM! when the
two comics merged at the beginning of 1968. 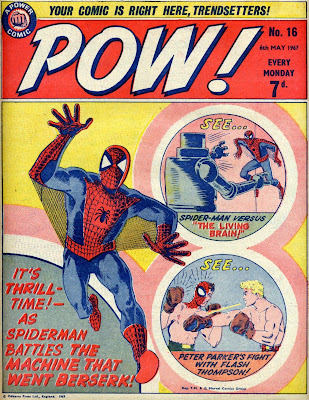 Engelbert used to sing under the name of GERRY DORSEY before
adopting the more famous appellation by which he is currently known -
and to which he legally changed it at the height of his popularity way back
when. Let's hope the 76 year old singer wins it for Britain with his ballad,
'Love Will Set You Free' on May 26th.

FOOTNOTE: Sharp-eyed readers will have noticed that the
name 'Engelbert' has clearly been relettered (as has the surname),
suggesting a last-minute update. One speech balloon has been over-
looked however (page one, panel seven), and the name is rendered
as 'Jimmy' - no doubt the likeness was also altered. Can anyone
hazard a guess as to who the original singer may have been?
Posted by Kid at Sunday, April 15, 2012

Would it possibly be crooner Jimmy Young (and later a DJ)?

I think that, in 1967, Jimmy Young was already a DJ, his recording career being well behind him at that point. I reckon it would have to be someone else, tongalad. Jimmy would've been too old to be regarded as a heart-throb to schoolkids. (Especially with that dodgy 'syrup'.)

jimmy ruffin,'what becomes of the broken hearted',seems to be the only 'jimmy',who was around in 66, 67,unless you count james brown.

I honestly have no clue...but I tried,

Could originally have been a singer from a group, so it's anbody's guess. Might even have been a misspelled Jimi Hendrix. Engelbert had the three best selling singles of 1967, so it's not too hard to see why the original name was changed to his - he was probably in the charts at the time.

Probably just a fictional pop singer they decided to change to Enge at the last minute.

It's certainly another possibility.